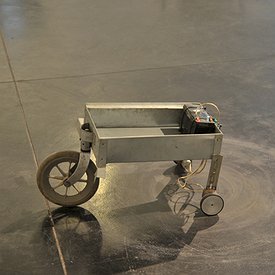 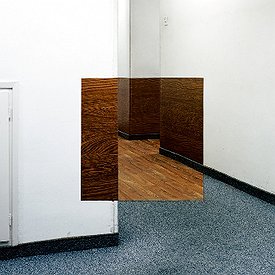 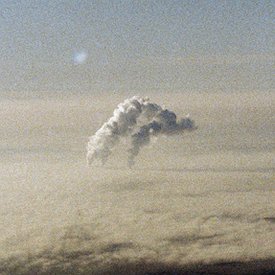 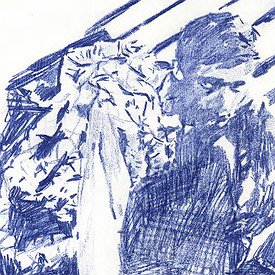 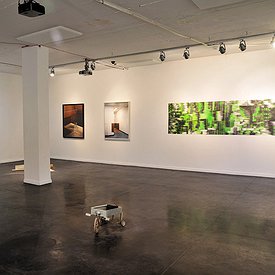 The exhibition refers to an indeterminate state between the private and public spheres, and to the tension that rises between these two extremes. Given that living within a confined frame provides for basic human needs like structure and routine (for having no boundaries at all is intolerable), it also contradicts mans' desire to fulfill his free will. Thus the works in the show shift between representations of "autonomy" (the ability to make decisions without external influence) to "automation" (mindless mechanical action, controlled by an external source); Between works that vary from construction in a private set of rules, existing in an independent to autistic sphere, to works which correspond with the environment that they were created in. Additionally the structure of the works stands in the centre of the exhibition. Thus the method of work, the construction which dictates its' form and justifies it, is put across as an index to the ways in which the artists deal within systems.

Naama Miller is showing a work made of monotonously drawn lines. The motion of the artist's hand simulates a printer that creates images by methodically transmitting colour codes on to the page. The severe technique requires the artist to follow a strict set of rules which she herself has confined herself to pursue. However, this precise state of mind gradually becomes a meditative condition of consciousness, which also explains the abstract image that her action forms when the process ends. The end-result is therefore a documented action that relies on the basic work material (paper, pencil and ruler) and on the constructing technique (repeatedly drawn lines). Simultaneously it also rejects any grasp of reality and figuration and departs from the need to depend on it.

In Eden Bannet's twenty five drawings, she chose the image of Breson's "A Man Escaped" movie poster, as the basis for handmade duplications from tracing paper. Like Naama Miller, Bannet's work also brings to mind a printing machine, which in this case repeatedly dispenses the same image. However, although she constricts herself to the image of the poster, she consistently disrupts the original form of the poster, with every version she produces. Though the end result is not abstract, one can find an affinity to Miller's method, since they both choose to focus on the fundamental elements of drawing (line, composition, the materiality of the paper and drawing utensil). Here again, working within a constrained set of rules, allowed for playful experimentation.

Bannet's floor piece "Instrument" also deals with the subject of deconstruction and reconstruction, through the study of the formalistic language that constructs both the world around her and the artistic object. Her work leans on the logic of the forms that assemble different apparatuses (one can see traces of a ship, a crane, or geometric appliances), in order to create mediated spaces between forms that resemble certain objects to forms that define them specifically. Bannet aims to identify the constructing mechanism of different objects and in order to implement them into an aesthetic arrangement.

Oz Malul's work "Grill" is part of a language the artist developed, through creating dysfunctional electric machines. The motorized grill spinning around in a continuous circle, revokes the apparatus from its initial utility to benefit man and gives it a life of its own, a reluctant one at that. Though the work is called "Grill", it obviously ceases to function as such. Therefore there is a semantic play on words in addition to the play on functions. Thus the result of merging different functions turns into a Frankenstein of machinery, an un-amusing joke on our behalf.

Malul's video work is a twenty minute video loop in which the artist wishes to draw money from an ATM machine however he refuses to pay the required charge for the service. Choosing to refuse, Malul reflects the absurdity of the seemingly free choice that is supposedly offered to him – "I agree"/ "I disagree". The work manifests the closed circuit in which contemporary man understands that he is being exploited for no apparent reason, but continues to cooperate with the system for no other choice.

In Roy Menachem Markovichs' "Wheels of Rage", appears a character that only her actions can be seen, along with a few attributes in the form of an ornate motorbike that looks equally uber- macho and ridiculous. The character that comes to mind is something between a hooligan, a Hell's Angel and a madman that doesn’t seem to comprehend that he hasn't managed to achieve either personas. It seems the biker is unaware of social codes that require respect for the other's personal space, as he bursts into it in a manner that goes from playfulness to crudeness and even violence. It appears that the biker is unseen because in fact he isn't the subject matter of the work, rather than the reactions of the people he bumps in to- shocked, irritated or amused. Thus apart from the social theme the work raises, these people all tell something about the way that they react to disrespect of their personal space.

Yochai Matos refers to his work as a street artist, through using peeled wall paint. The heart shaped work is one of his old street pieces, which he lately peeled off. Similarly to how Marcel Duchamp viewed the role of the artist as the mother of the work, Matos addresses the developments the work went through since its creation. Covered by signs of time, damage and an unsuccessful effort to erase it, it unfolds the history of the street it was in. Consequently his reclamation of the work intensifies the tension between viewing a work of art as a representation of the artists' inner world and the effect the environment has on it.

In turn, Matos's work "My Emotions are Authentic" appropriates the personal history of anonymous people who threw out the remnants of peeled wall paint from a nursery room to the street. The text created from the found material echo's the sincere intentions of the material's previous owners, to create a warm feeling through kitsch décor. Therefore, whose emotions in this case are unauthentic? Those of the person who applies to his private home (and world), the cultural conceptions of domestics, beauty and gender, Conceptions he perceives as his own; Or those of the artist, that sarcastically uses unconscious social phenomenon's such as these as his working material? It can be said that although the work is ironic it also extremely valid, since emotions are always experienced as genuine, no matter how one is seemingly self aware.

Shmulik Twig is showing part of a circus inspired installation combining sculpture and software. As the circus represents a world where the borders of reality are stretched, Twig combines it with the mirage offered by the big screen, similarly to the French magician- film maker Georges Méliès. Nevertheless while Méliès was captivated with the optical illusions the moving camera offers, Twig chooses to reveal the technical manipulations he creates. The work in front of us summarizes this idea, for it requires the viewer to activate the piece and understand how it works. The static machines are brought to life with every push of a button, turning on a vaudeville- like magic show presented by the artist. Consequently it raises questions about who is being controlled- is the viewer actually controlling the work or is he in fact turned into a marionette in the hands of the artist.

The two photographs by Matan Mittwoch, document the artists' interventions in an office space. Mittwoch uses the material and colorful structure of the particular office and places pieces of wall paper and mirrors in strategic positions that distort the perspective and modify the way the space is perceived. Therefore he creates a dual manipulation, both materially and optically, as he creates an illusion of spaces within spaces. It is as if he creates portals into new realities, but these realities can exist only in the photographed moment, since the illusion would have been ruined if the viewer was physically present in the space and able to view it from different angles. Hence Mittwoch has created a new world to which the viewer is both invited to and denied actual entrance.

Like Mittwoch, Haddas Satt's pair of photographs creates a distortion of perspective and it takes time for the viewer to understand what he is seeing. Satt focuses her work on low-tech snapshots which she then joins to create sentences from seemingly random images. In the show we see a juxtaposition between a photograph of clouds that she took from the window of an airplane (one of the most popular and banal subjects of photography), and a photograph of melting ice in a sink. In relation to the exhibition, the pair of different states of matter may be read as a record of dissolving borders. The common touristic need to capture the excitement experienced upon the view of the amorphous, abstract sky, simultaneously defies itself since the enchantment of the same endless sky that ignites the viewer in the first place, is refuted by the frame of the photograph. Therefore when placing it across from a generic image as melting ice in a sink, creates a tension between the need to define limits and diffuse them in return. 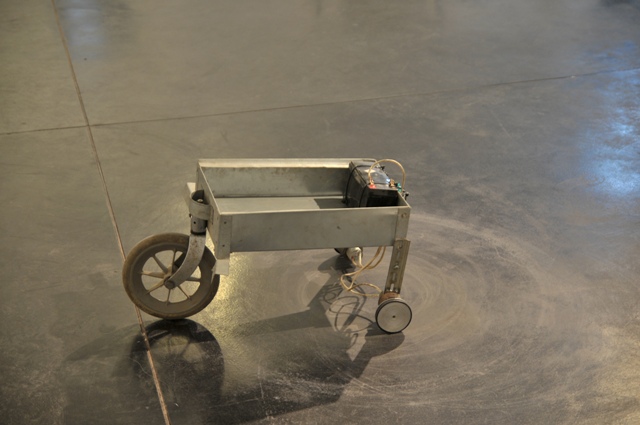 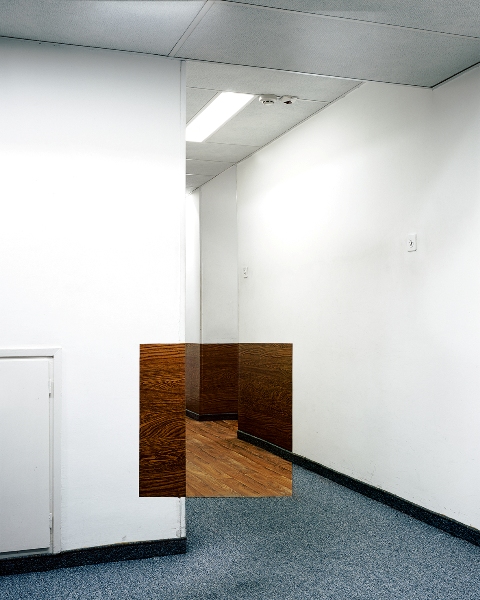 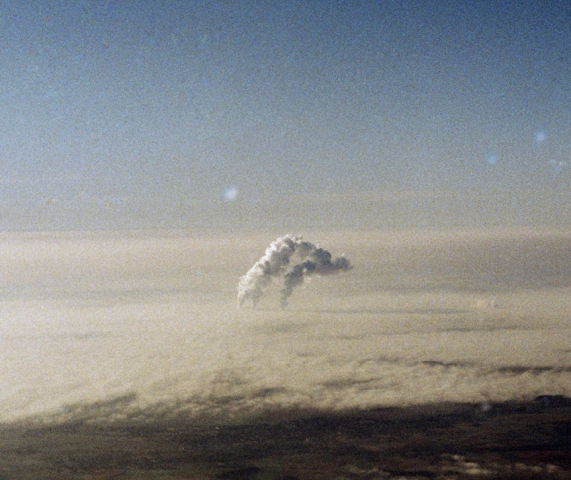 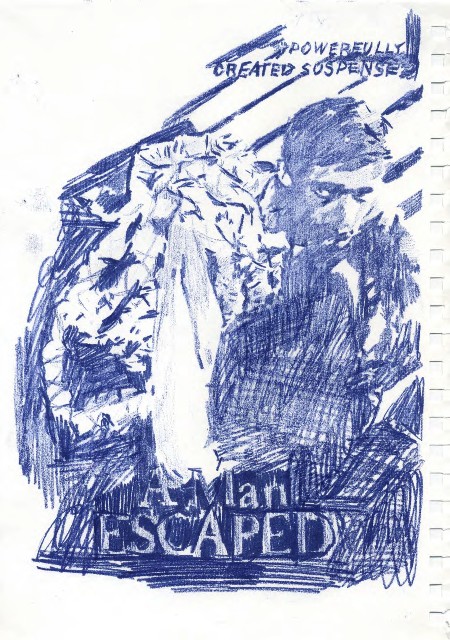 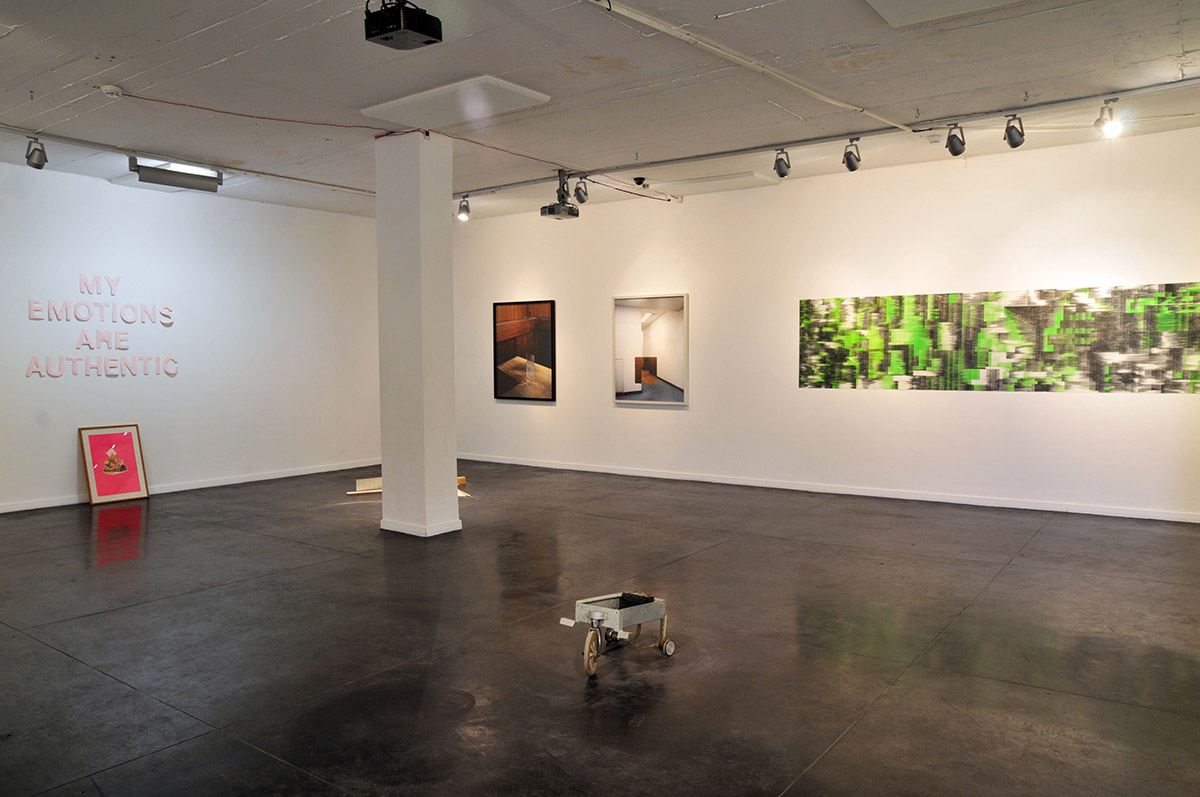