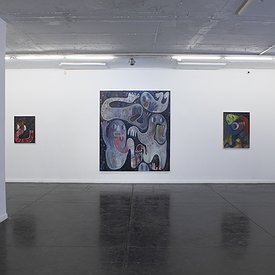 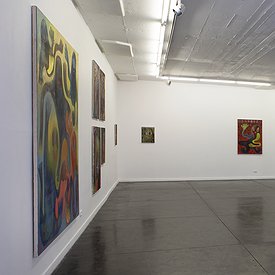 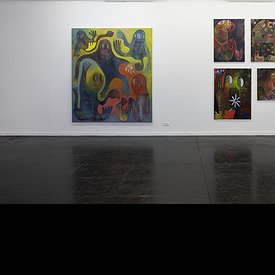 Professor, Department of Art History, Theory and Criticism, School of the Art Institute of Chicago

Our children are having nightmares. Unsettled by the frenetic and uncertain state of the world, fiendish creatures populate subconscious dreaming.  And so it is for the painter, Aviv Benn who captures such chilling visions in her new body of work, titled Ashglory, after poet Paul Celan’s haunting words.  Here we find ghostly, amorphous figures — some frightening, some not, wide-eyed, staring in awe of what lies before them.  Tragic yet beautiful, their oversized hands making gestures that slip between warning and welcome, fear and desire.  And all float within ornamental fields of paint splendidly embellished with patterns and motifs that ooze onto and through their gossamer skins. Benn’s boldly colored characters catch our gaze and we stare back in alliance with their states of shock and astonishment.  We share in this peculiar place of existential unknowing that Benn so brilliantly conjures through her painted images of sympathetic monstrous beings.

One such ominous creature, in Down Melancholy’s Rapids of 2018, hovers within translucent layers of delicious, sweeping color and a night sky replete with sparkling flourishes.  The figure is all hand, tongue, and face.  The heavy swollen tongue stippled with tear-shaped marks that slither down and transform into colored dashes is offset by an enormous hand to its left composed of a playfully curvy, thick contour line against films of paint.  Figure and ground melt and merge here as they do throughout the series.  Two white oval eyes with tongue-red pupils and masked by a wisp of white brushstroke flank a yellow green nose above five white teeth.  Like Francisco Goya’s Saturn Devouring his Children from 1819, this monster bodes some terrifying oral encounter.

The grotesque in art is nothing new.  From Matthias Grünewald to Dana Schutz, the extremes of human pain and suffering, and the symbolic embodiment of our irrational selves have always made for strong images in art.  Benn is interested in this tradition as well as the demonic follies of James Ensor, Odilon Redon, Jean-Michel Basquiat, and others, or the more comic and current Nicole Eisenman.  Chicago, where Benn did her graduate studies at the School of the Art Institute, is known for the so called “Imagists,” a group committed to surreal figurative work influenced by vernacular culture (Jim Nutt, Ed Pashke, or Gladys Nilsson), and these bizarre paintings surely reinforced Benn’s evolving tendencies.  Down Melancholy’s Rapids emerges from these influences, but its strange body bound into a pictorial surface of brilliant color and quirky detail is distinctly and wonderfully bizarre.

Benn begins her paintings with a kind of abstract expressionist gestural ground composed of distemper (rabbit skin glue and pigment).  Within this field, she searches for emerging forms, drawing out faces and body parts, in a surrealist, pseudo-automatist fashion.  She builds complex surfaces with overlapping, translucent painterly areas, adding wax medium, spray paint, oil paint, as well as directly scratching into the painted topographies that support and embed the principal figures.

Moon Gazer of 2019 exposes such a painterly palimpsest with its face and upraised hand rendered out of layers of mark-making.  The crevices behind the large round eyes, the sides of the nose and the remarkable phallic-like tongue that wickedly extends out of the mouth and wraps up into the left eye (a configuration she will repeat), all reveal the yellow and black swipes of the painted under-layers.  The figure’s upraised hand, again simply rendered with a contour line, surrounds the same yellow and black passages of paint.  The arm brusquely cuts across the figure’s head, covered with stars and sun bursts, those ornamental motifs Benn generously sprinkles throughout the series.

Moon Gazer’s face and hand are subsumed within a background of dancing dashed lines like a pulsating energy around the figure and a moon above; the staccato lines creating their own cosmic pattern in a column at the right that pushes out into the frontal plane.

The moon from Moon Gazer is a constant presence in this body of work.  Recalling the Jungian symbolism that informed Jackson Pollock’s canonical Moon Woman Cuts the Circle of 1942 and other like work, Benn similarly deploys the moon motif as a potentially universal mythic sign.  Many of her biomorphic, elastic beings clutch moons, or appear below the mysterious glow of the moon’s night light.  Perhaps Jung’s feminine power is on offer, although the figures lack any specific gender, instead appearing to represent us all.  The artist thus widens the possibility of the lunar sign.  Standing-For-No-One-and-Nothing, and Scars Carved Into the Spaceship, both 2019, host characters who fill the entire field of the paintings, cuddling moons in their big arms or embedding them in their ample belly. In Something Remains for Wild Wasting, 2019, cycles of the moon cross the canvas above a wily character with legs akimbo and one arm raised.  The waning and waxing of the moon here symbolizes time’s relentless churn, life begets death, again and again, and all the embellished figure can do is squirm below within a thick array of red spheres, patterned dashes, and black stars.

A crescent moon fills the upper half of I dug myself Into You and Into You of 2019, like the eye of a Cyclops directly above a terrifying mouth lined with teeth that dominates the bottom of the bipartite painting. This is the only piece in the series that bisects the canvas in this way, essentially jamming two distinct paintings into one work.  The collision is jarring but resonant, for the facial features line-up like a painted exquisite corpse (the collaborative figurative drawing game of the surrealists).  The stacking here recalls Benn’s common installation practice of hanging individual objects in close adjacency as an expanded patchwork of oddly complimentary forms and hues.  The synergy of her images in such an arrangement proving darkly entrancing.

Throughout the series, Benn builds a private cosmology of tragi-comical beings, a pantheon of mythic entities, gently wielding their moon totems in the hopes of working some witchcraft.  Like the mystical turn in some contemporary art today—the fabricated chimeras of Jimmie Durham or Wangechi Mutu, for example, the romantic sublime is again everywhere as the enormity of our existence seems to elude understanding.  All that is left is to conjure magic by beating the drums, reciting the chants, and drawing in the caves.  Benn’s sorcery, her alchemical transmutation of paint into powerful form and ornament contributes to the zeitgeist.

Two monumental paintings anchor the exhibition—one of daytime, the other night.  Daybombardment of 2019 barely contains the five interlocking bodies that float in a rich, sun-drenched space of brightly colored patterns.  Their eyes are wide and round—moon-like, and they smile broadly as in some ecstatic state.  The complimentary five figures in Nightthings Again, of 2019, also tightly fill the frame, but their bulbous masses with attenuated limbs possess gaping mouths, howling into an enveloping darkness punctuated by glowing stars that slip onto the figures’ skins. Lightness versus darkness indicated by these two, enormous works exemplifies the larger drama of the series.  Neither state seems to either elucidate or obscure meaning.  Rather all these monsters, whether cast in luminosity or shrouded in nightfall emit a wary pathos leaving us with the remarkable unknowing of being.  They smile and grin, groan and bay, and only their colorful and decorative renderings stave off a profound hopelessness.  Benn’s formal execution is so rich as to lighten the burden that accompanies such contemplation.  Poetry, whether that of Paul Celan or the visual poiesis of Aviv Benn, sustains us as we wrestle with the mystery of our existence. 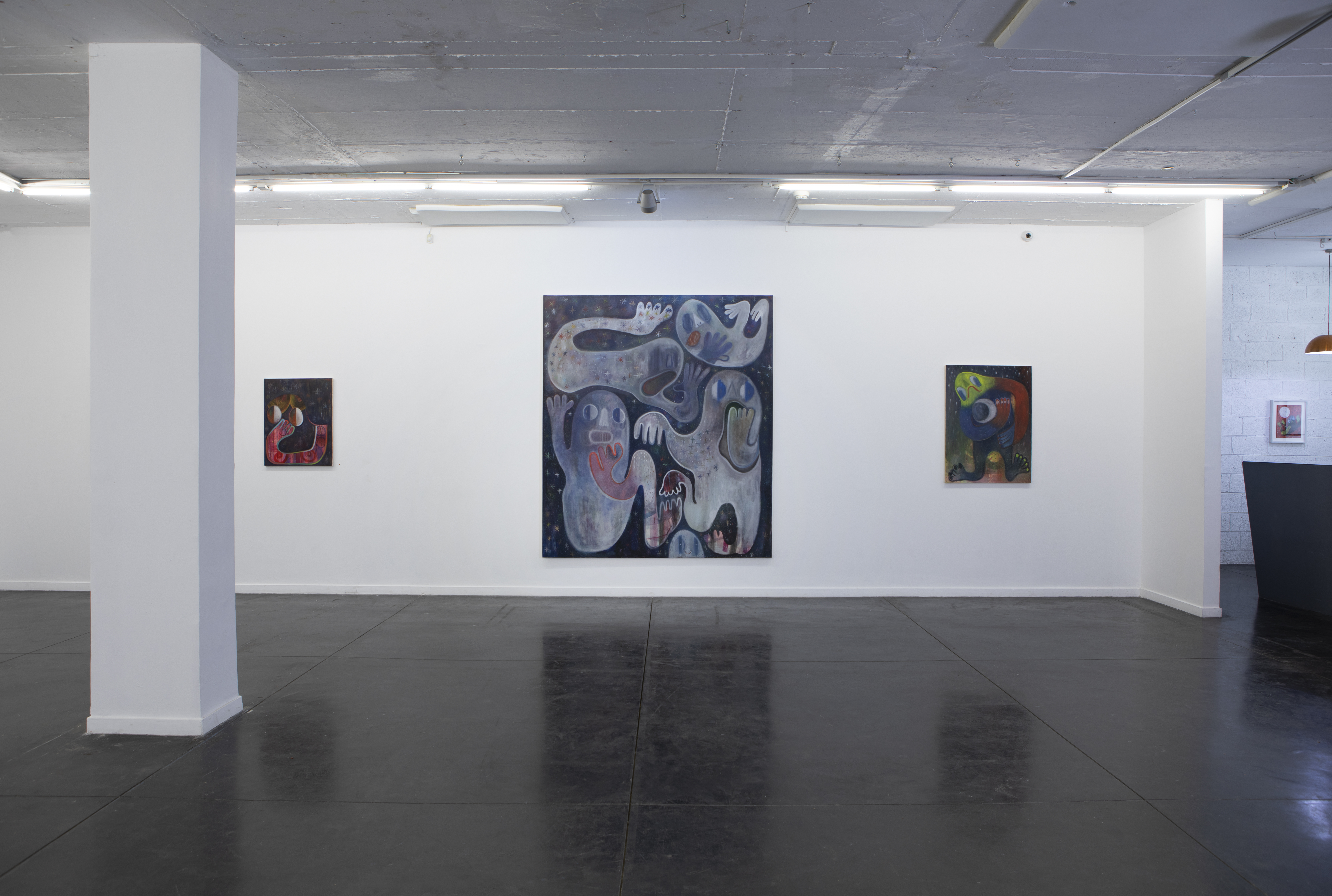 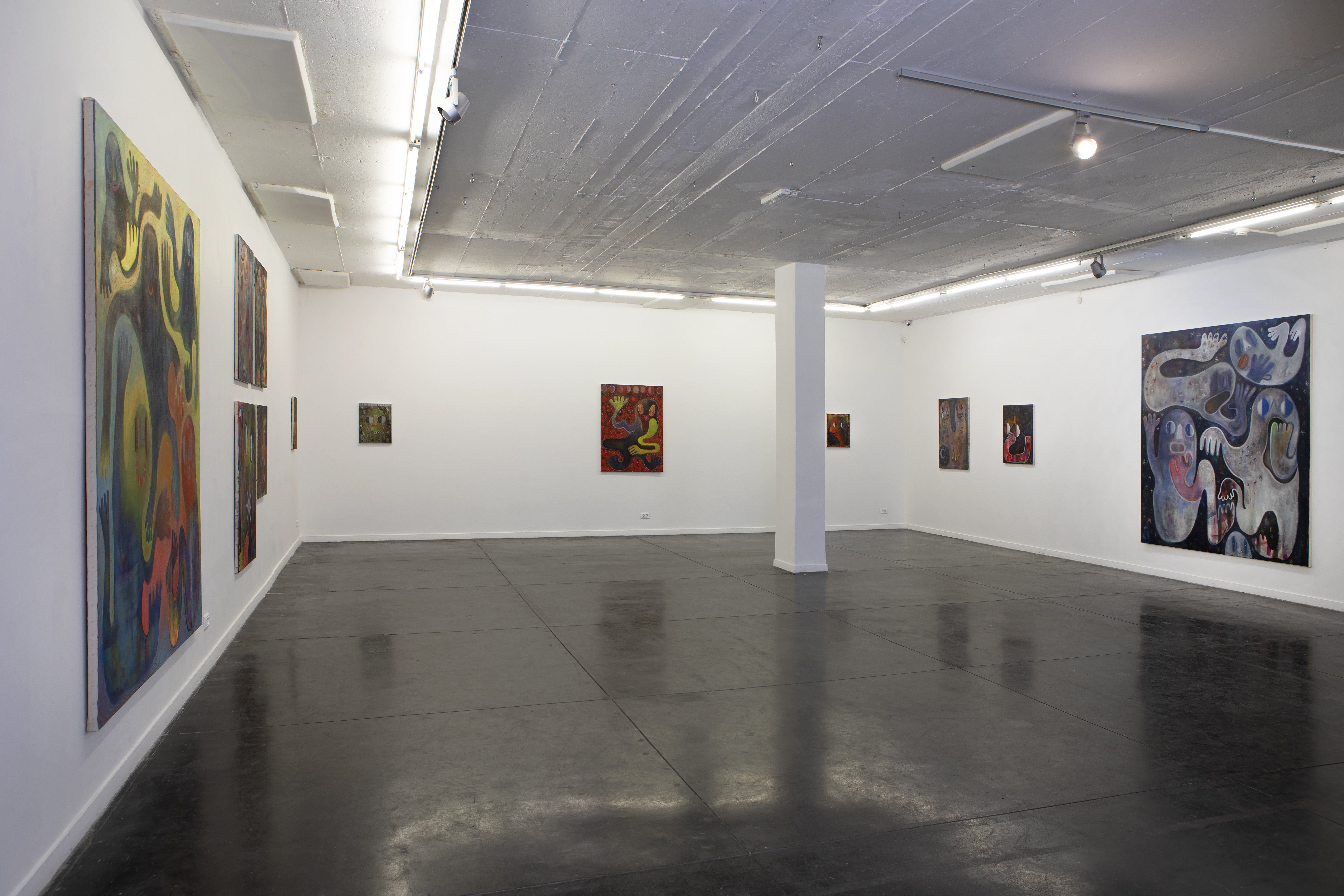 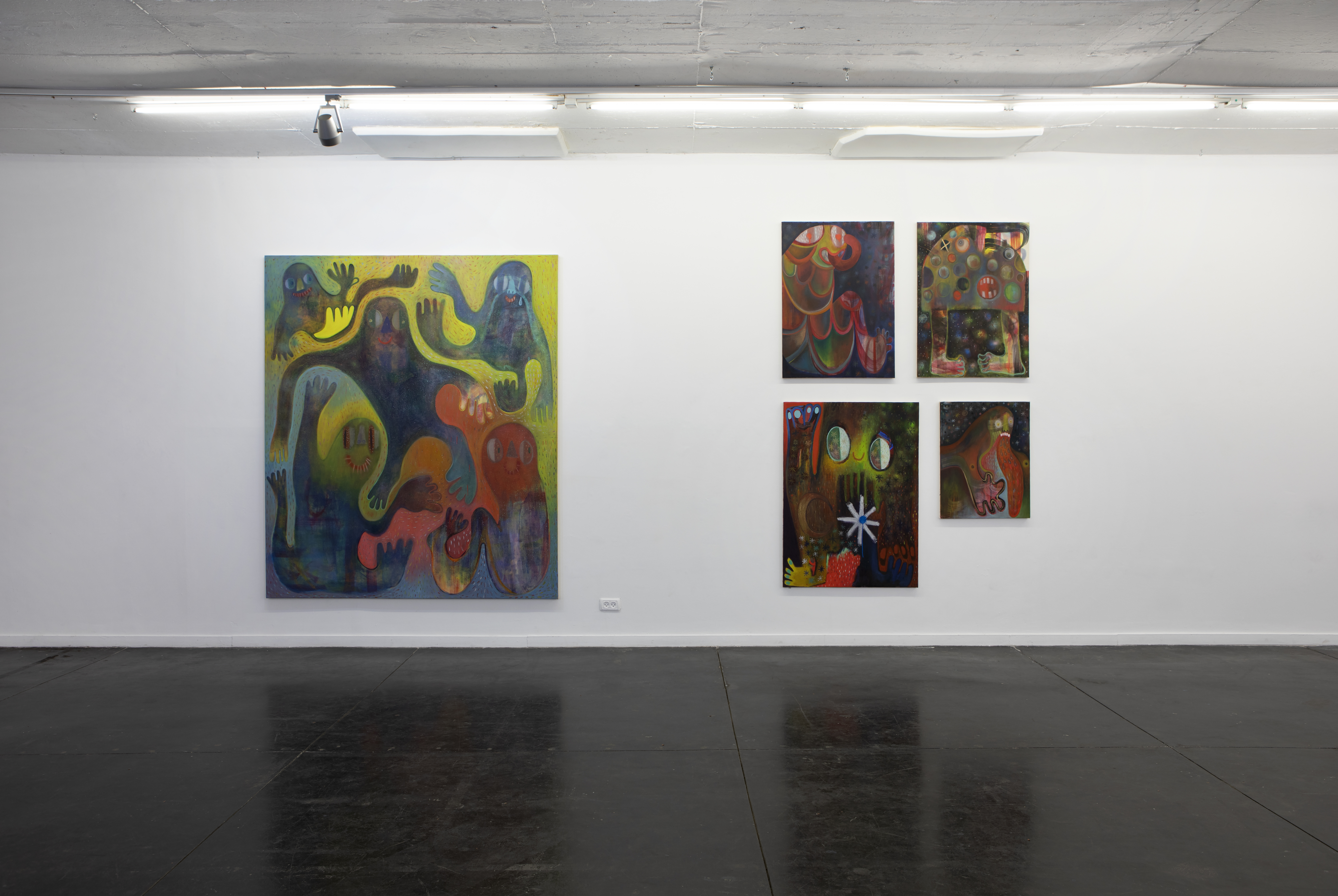