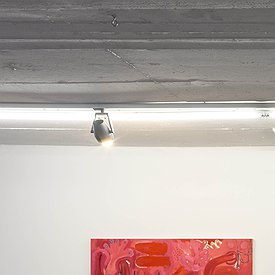 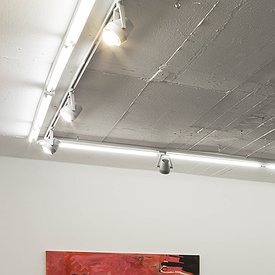 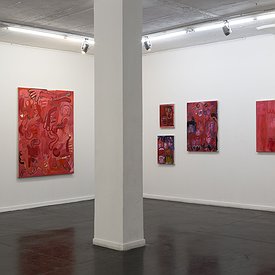 Aviv Benn | In the Land of No Emotions

Screaming faces with bewildered eyes stare at you. Their hands are raised into the void. The tortured creatures do not have feet to stand on a ground that is not even there anyway. Crowded together, they float in a red, narrow, menacing space. Aviv Benn’s Land of No Emotions appears full of fear and anxiety.

In her paintings, Benn captures her feelings and reactions towards the life in our current era. “I create a generic sense of panic in my works. I feel the uncertainty, fear and horror we all experience. They fluctuate from the personal to public and vice versa,” says the artist.

The colors Benn uses are intuitively chosen and relate to the human body and its chromatic appearances. Red rules the Land of No Emotions. It evokes associations like blood or wounded bodies, radiating the body’s vulnerability. The bright colors also convey a cartoon-like, humorous exaggerated depiction of the body, as no one’s outside or inside are this shiny red or pink. Using this unnatural color scheme creates a sense of distance between the viewer and the pain and hurt.

The pair of paintings titled This Can Go Either Way (both 2016) are the most colorful paintings of Benn’s current works. Blue and turquoise appear on the surface and the color black penetrates through to the front. Broken hands with four fingers are stretched senselessly up in the air and hold the composition of the painting together. They frame the faces emerging from the red-black background in strong yellow, green and blue-turquoise. Trying to hide behind the hands, their torn, wide-open mouths scream, and their empty eyes appear horrified and numbed.

The fragmented limbs appearing in many of Benn's paintings symbolize the fragility of the human body. Hands, teeth, and tongues are the most expressive parts of the body for Benn. In her paintings, they act as individual entities— placeholders for the body in its entirety. Rather than serving as tools to experience the world and to communicate, they struggle to find a foothold and call for help. But their cries remain unanswered. By repeating the same elements over and over, the creatures collectively form the Land of No Emotions, where fear and anxiety constantly loop and escape seems impossible.

These faces seem to exist in parallel, as they do not interact, symbolizing how humans can no longer relate to one another. For example, the paintings You Can Die of a Broken Heart (obviously) and These Love Songs Don’t Work (2016) both depict fragmented body parts painted in monochromatic garish pink. The titles, as well as the subject matter of the paintings, directly address our failure in managing emotions and communicating with one another. The characters in the paintings touch each other in a somewhat sexual way. But as they cannot relate to anyone, they do not seem to feel any pleasure.

Benn’s painting language is expressive and immediate. Opaque and translucent brushstrokes made of pigments and rabbit skin glue and textile monotype prints, as well as oil paint, together create a sense of depth in the flat painting ground. The outlined figures merge into the layers from the back- and foreground. These fluid characters shape the ambiguous space around them. Metaphorically speaking, they are responsible for the grim state of their own surroundings, yet seem unaware of it.

The majority of Benn’s paintings are vertical, echoing the human body, both as it is represented in the works, as well as through the body of the viewer. However, the paintings A Day in the Yellow Sea, 4/4 and Panoramic Emotions (all 2017) were painted horizontally. This composition exudes a sense of instability. Mouths, eyes and armless hands float aimlessly around and blend into each other. The body parts become an abstracted form of landscape. They turn into a fleshy sea, where they lose their distinct description.

A monumental mouth with cracked teeth stands agape in Even More YOLO (2017). It encompasses huge hands that layer and fade out to the background. A set of white teeth and staring yellow eyes gleam through. The painting operates as a post-modern Memento Mori, as YOLO refers to the term You Only Live Once. It is a primal expression of a young generation that forces itself to enjoy life with no consequences, to take risks and to neglect rationality or social rules, out of fear one will not live life to the fullest.

Benn’s figures appear comical as they attempt to escape their entrapment with excessive yet futile gesticulations. She paints a weighty topic in an apparently exaggerated and unserious way. With this juxtaposition, she creates a distance that enables viewers to reflect remotely on their own state of being. People may laugh because they see the irony, or because they recognize that they are facing their own despair or angst. As the artist says, “Humor is a way to deal with fear. In my paintings, the hints of humor aid the viewer and me to cope with the anxiety.”

In her works from 2015 and 2016, Benn was occupied with the primordial fear of death, seen through her ironic, dreamlike and narrative sceneries – full of whimsical skulls, fidgety hands and throbbing hearts. Her recent paintings engage with tangible threats of today’s everyday life and are filled with helplessness and angst. This is the Land of No Emotions, the make-believe space in which Aviv Benn’s characters exist and where we all actually live.

*The exhibition is accompanied by a catalog 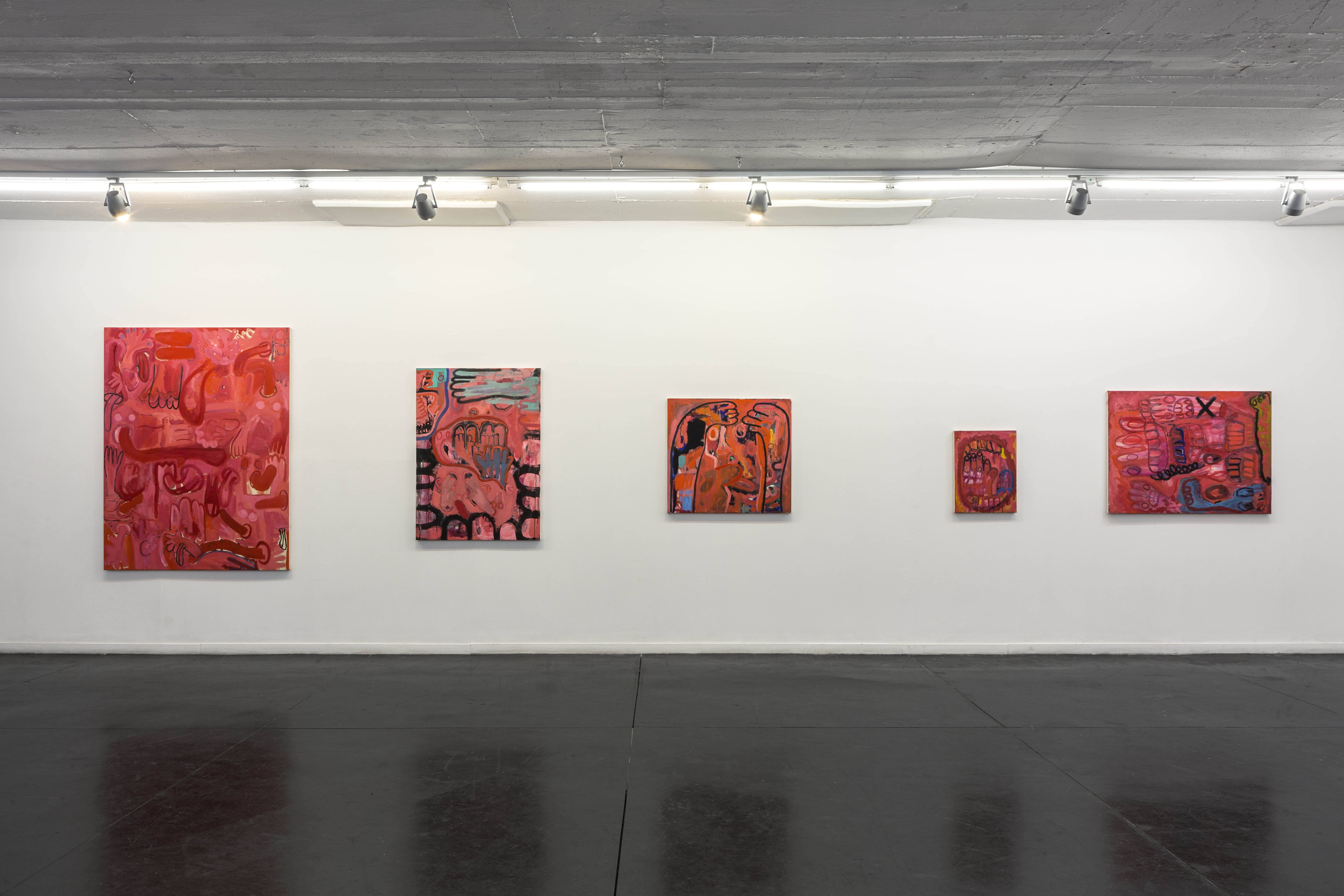 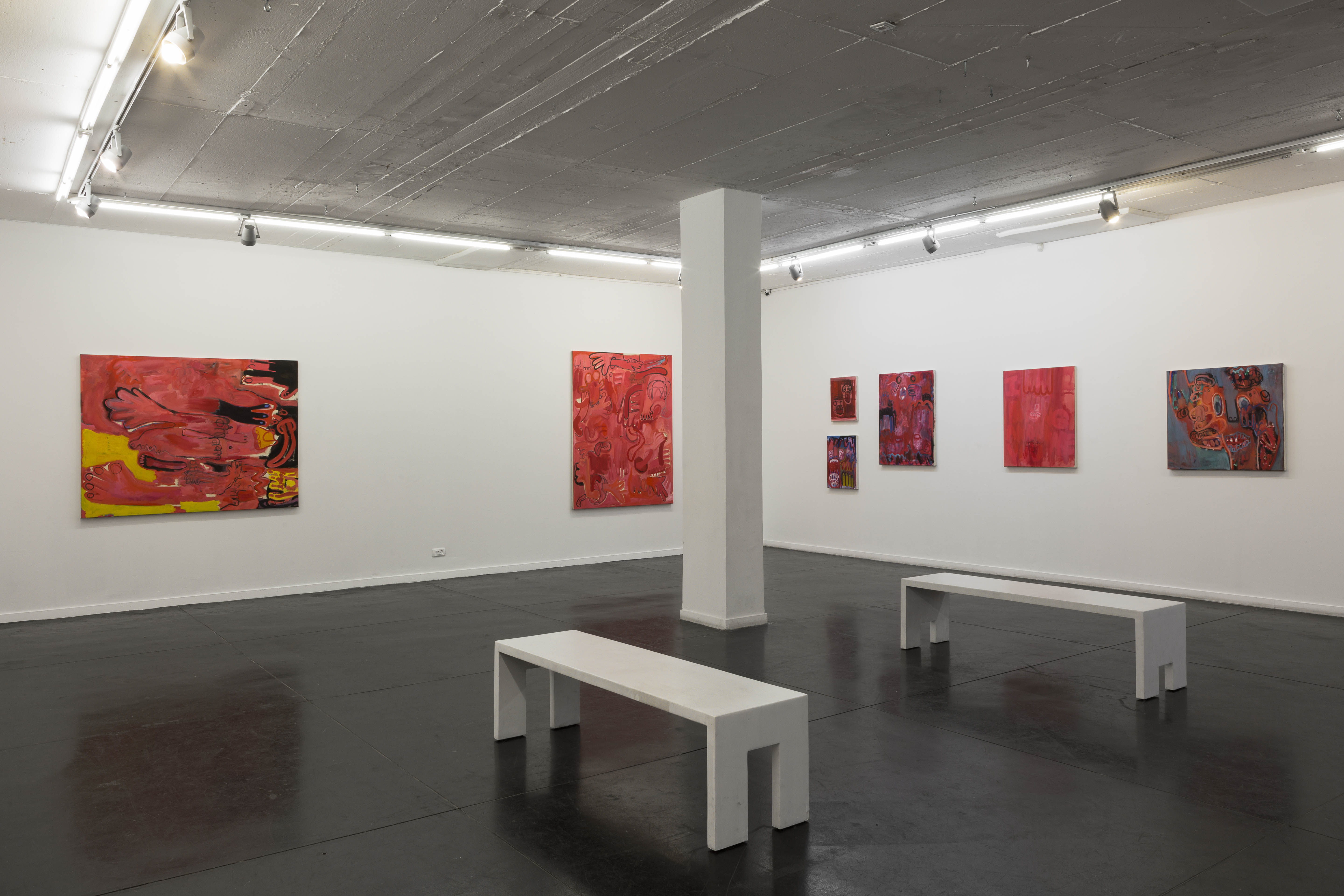 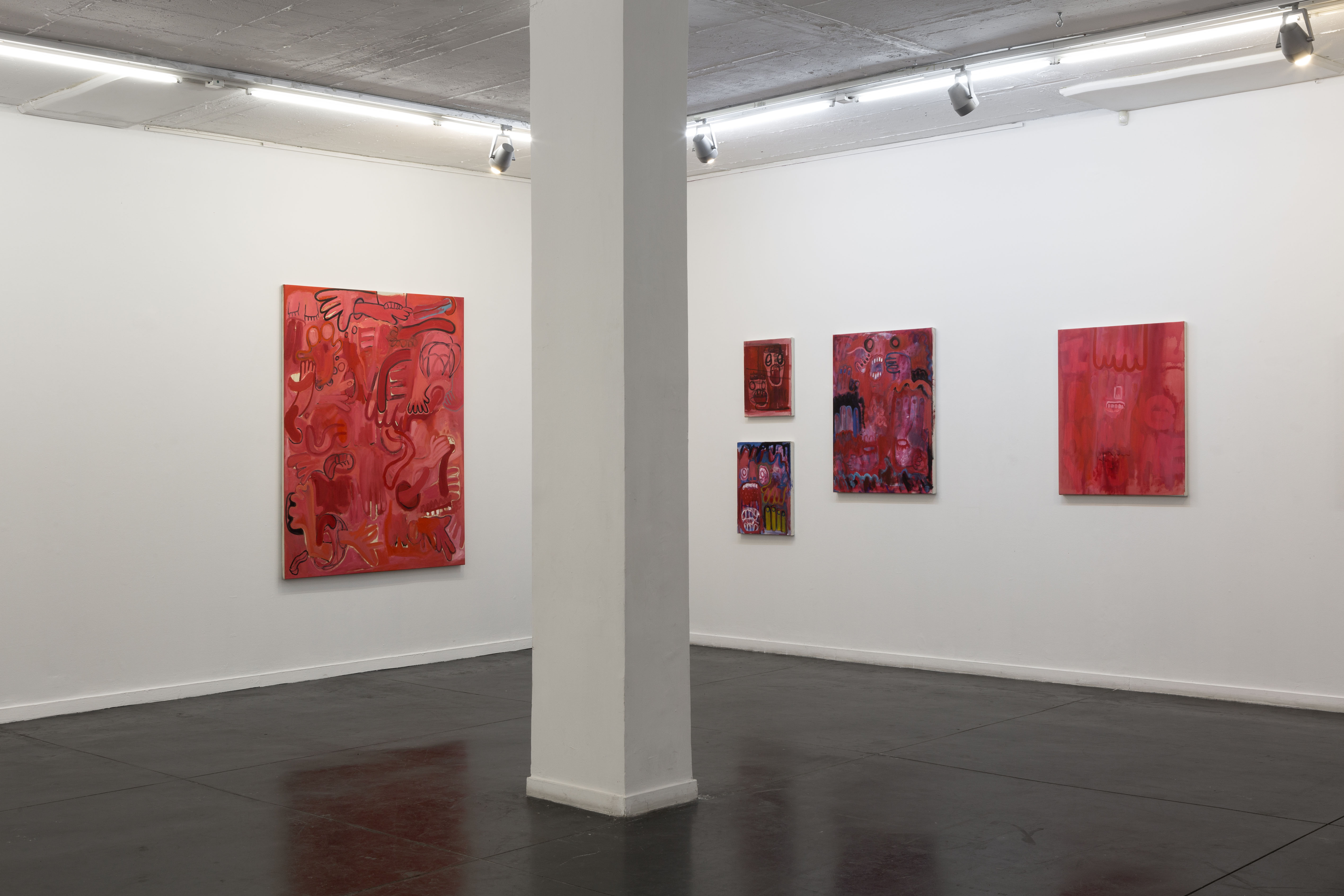