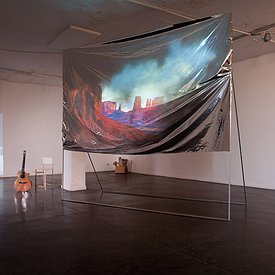 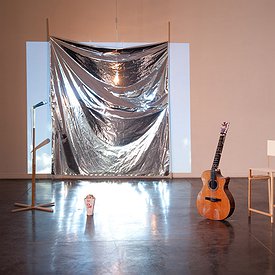 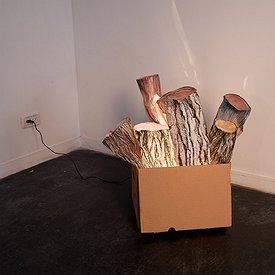 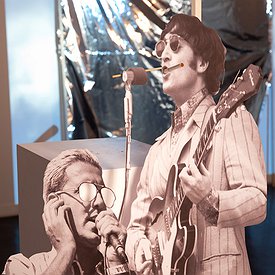 The world Elisheva Levy creates seems full of sweetness and beauty. Colored in a palette ranging from pastels to glitters; loaded with images infused with clichés of glamour and fantasy, like the American wilderness, the Rock n' Roll Hall of Fame or the movie theatre; and going to clichés of optimism such as skies and rainbows.

Levy seemingly takes on all the things that the critically aware intellectual looks down upon and chooses to embrace the illusion offered by the "American Dream" or Hollywood movie. Admitting to the fact that the world is truly dreadful, she offers to succumb to the dream we're sold, as the sane alternative. Ultimately, the La-La world she creates testifies to a very healthy common sense or even to survival instincts. For if we give way to the cruel and violent world we live in, we might not be willing or able to live in it. More so, she chooses this alternative language as a means of objection, as a refusal to cooperate with the violence.

However, her works are deceptive, for at times they mislead at first glance, appearing to be the objects themselves. They expose themselves as sculptural objects only with closer inspection, which reveals their simple materials and so called careless joints. At other times the deceit is more direct and overt, with candidly exposed hanging tools and installation devices or extremely slacked joints.

It is interesting to consider whether the experience of falsely identifying an object and mistaking it for being real, demonstrates a human need to believe in the illusion we are presented. If it confirms the premise that submitting to fiction is consoling? Either way, the works' declared artificiality manifests them as signs of reality, as ultimate representations fully aware of their limits. Thus they fall under the basic definition of art- a frail shadow, an empty shell of reality, a symbol and no more.

This exposed quality relies on great extent on the fact that the works are all handmade. Even the photographs are a result of artistic intervention- with Photoshop (the transplanted rainbows) or as a document of a modified found object (the sprayed golf ball) and even the purposely amateurish hand crafted frames. This persistence to create everything by- hand connects to the fundamental American principle that every man creates his own destiny- as the American dream encapsulated and as one of the conceptual guide lines of the exhibition.

What's more, the hand-crafted fragility in the exhibition (of both the individual works and the installation at large) creates a dangerous threat of the whole thing breaking down with one slight movement. The works are therefore fundamentally prone to self destruction and instability. They raise the question if their breakability is due to their inability to defend themselves or to society's' inability to contain fragility. In that sense, they function as objects with human traits, touching in their vulnerability, in their aspiration to be more than they really are, in the dreams they enfold. 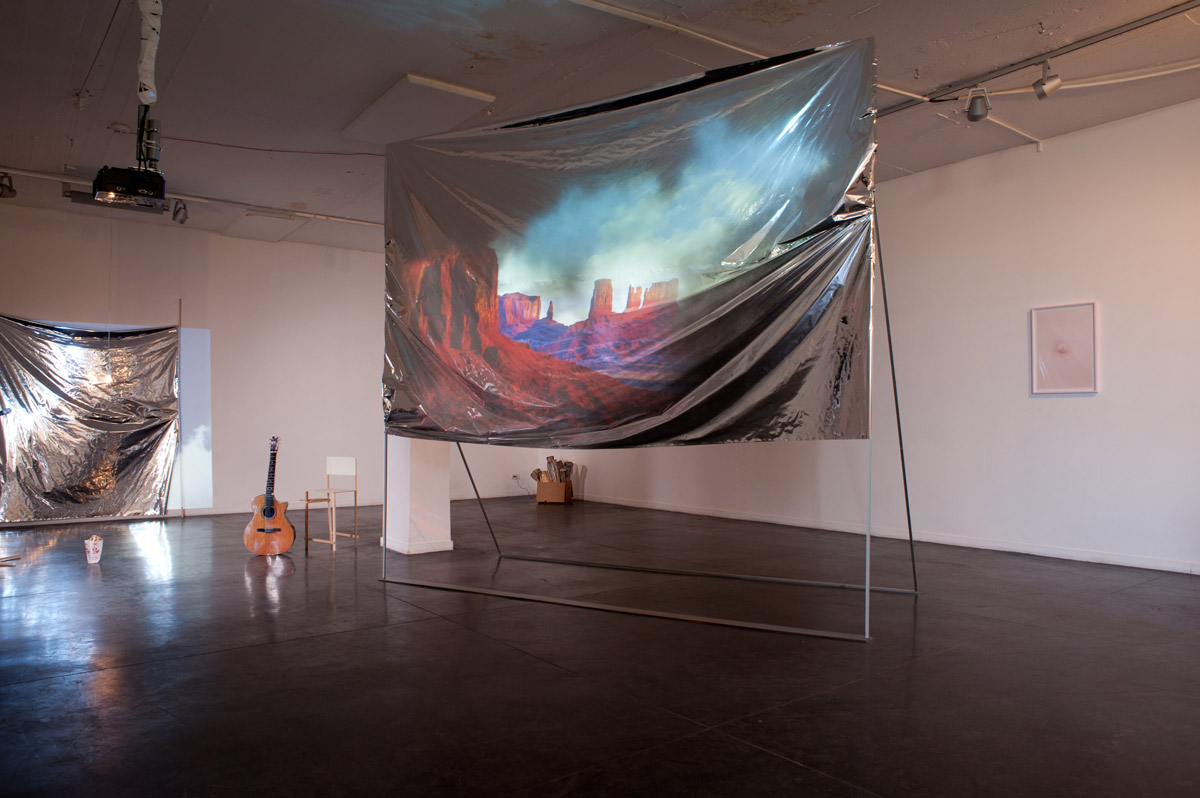 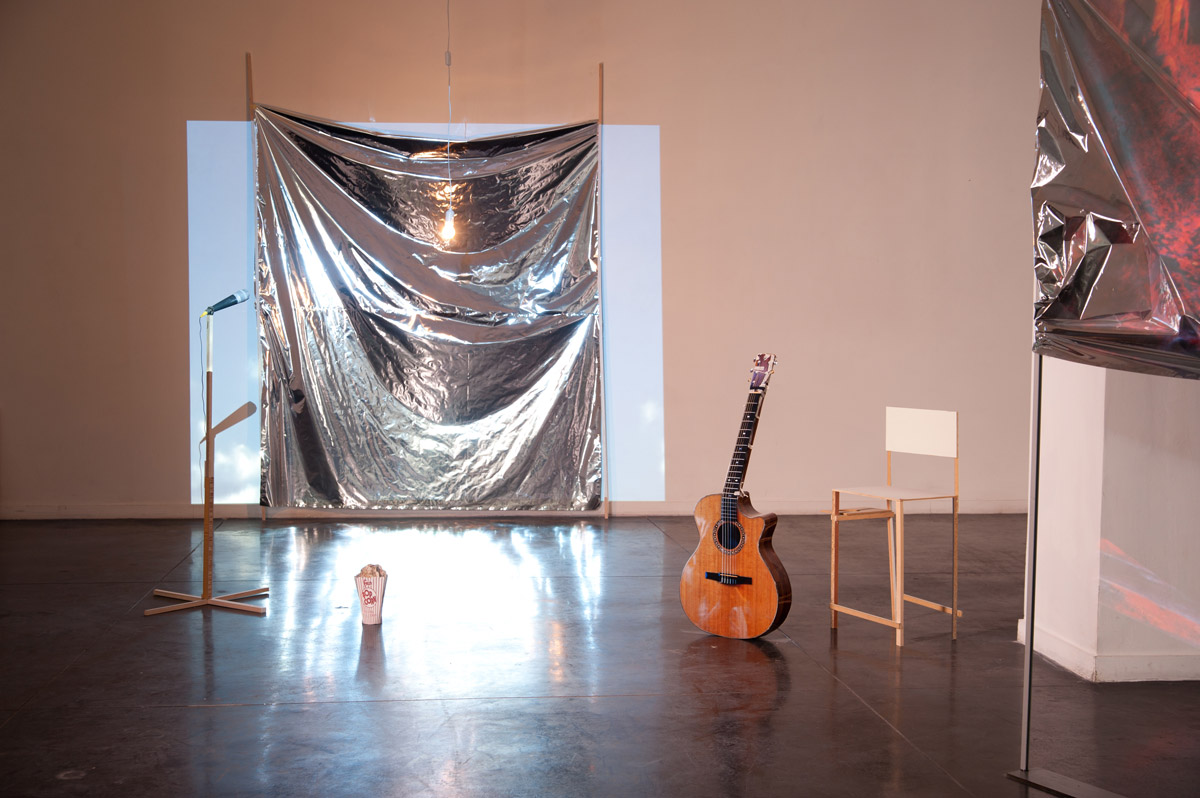 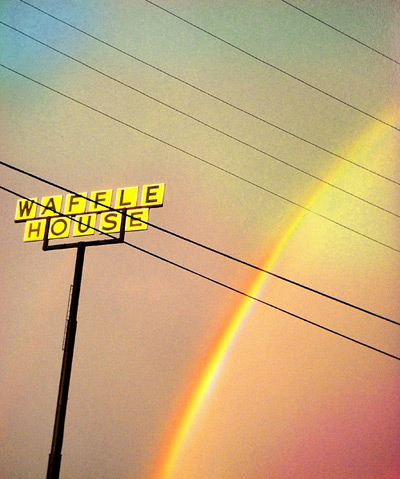