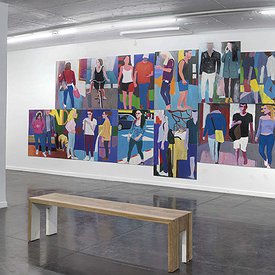 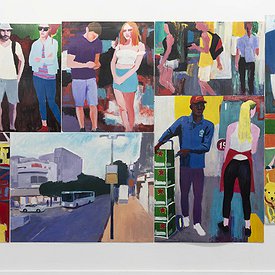 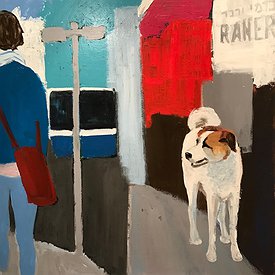 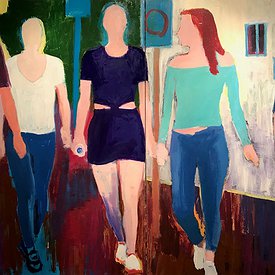 Gallery is pleased to announce the opening of Eran Wolkowski's fifth solo exhibition at the gallery, named ‘Mirage’. The show paintings created in the past two years. It is comprised of a series of panels, depicting on the sidewalk of a main street, either walking or waiting to cross.

These are impersonal personas, most of them in movement – towards you and away from you. Temporary, ephemeral people. They will not be seen again. They are replaced or, more accurately, they pass on by. The characters are snatched from the stream of the sidewalk on a smartphone camera. The quick and random selection, as well as the processed interpretation, rough and spontaneous, without details and without many identifying features. The panels are processed with unrestrained and almost crude attributes, using simple industrial paint on whatever basis available – as befits an immediate approach that eschews pathos and .

The exhibition clearly refrains from ; unlike his previous exhibitions, Wolkowski does not devote himself to providing signs of time and place – even if something of this finds its way indirectly into the works. The subjects of his work are extras in an inconsequential scene; they are the raw material from which an 'unrealistic,' colorful, , familiar and yet strange version of urban life .

Eran Wolkowski lives and works in Tel Aviv. He is a graduate of the department of Visual Communication at Bezalel Academy of Arts and Design. has had solo exhibitions in various venues, such as Mary Fausi Gallery and Gallery in Tel Aviv, Gimel Gallery in Jerusalem, Artists House in Tel Aviv and Jerusalem, Gallery in Toronto, and the Harod Museum of Art. His works were featured in group exhibitions in venues such as the Museum of Israeli Art in Ramat Gan, Bar David Museum in Baram, International Art EXPO, Washington DC, and Radius Gallery in Tel Aviv. Aside from his artistic practice, he is a graphic designer and illustrator for . 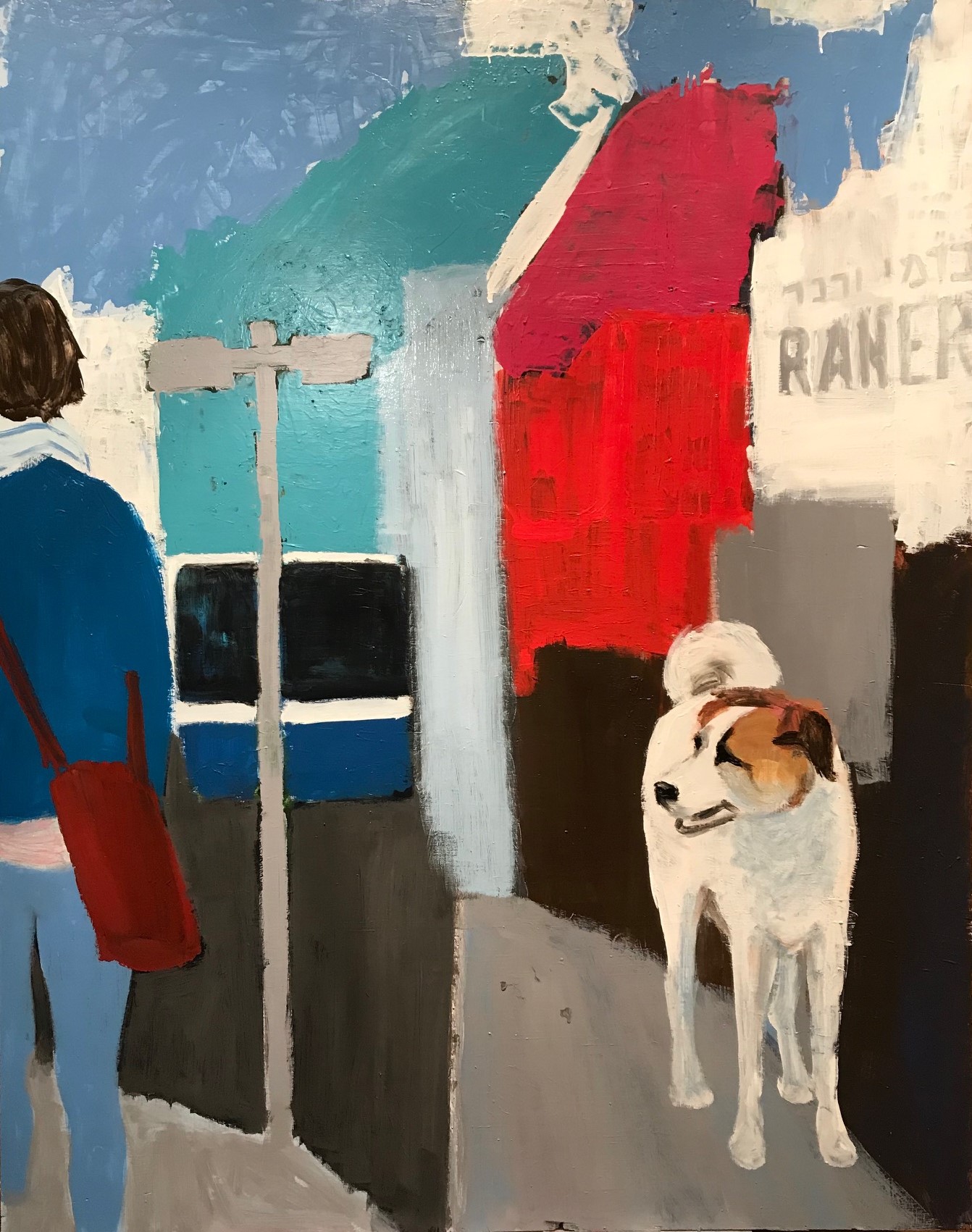 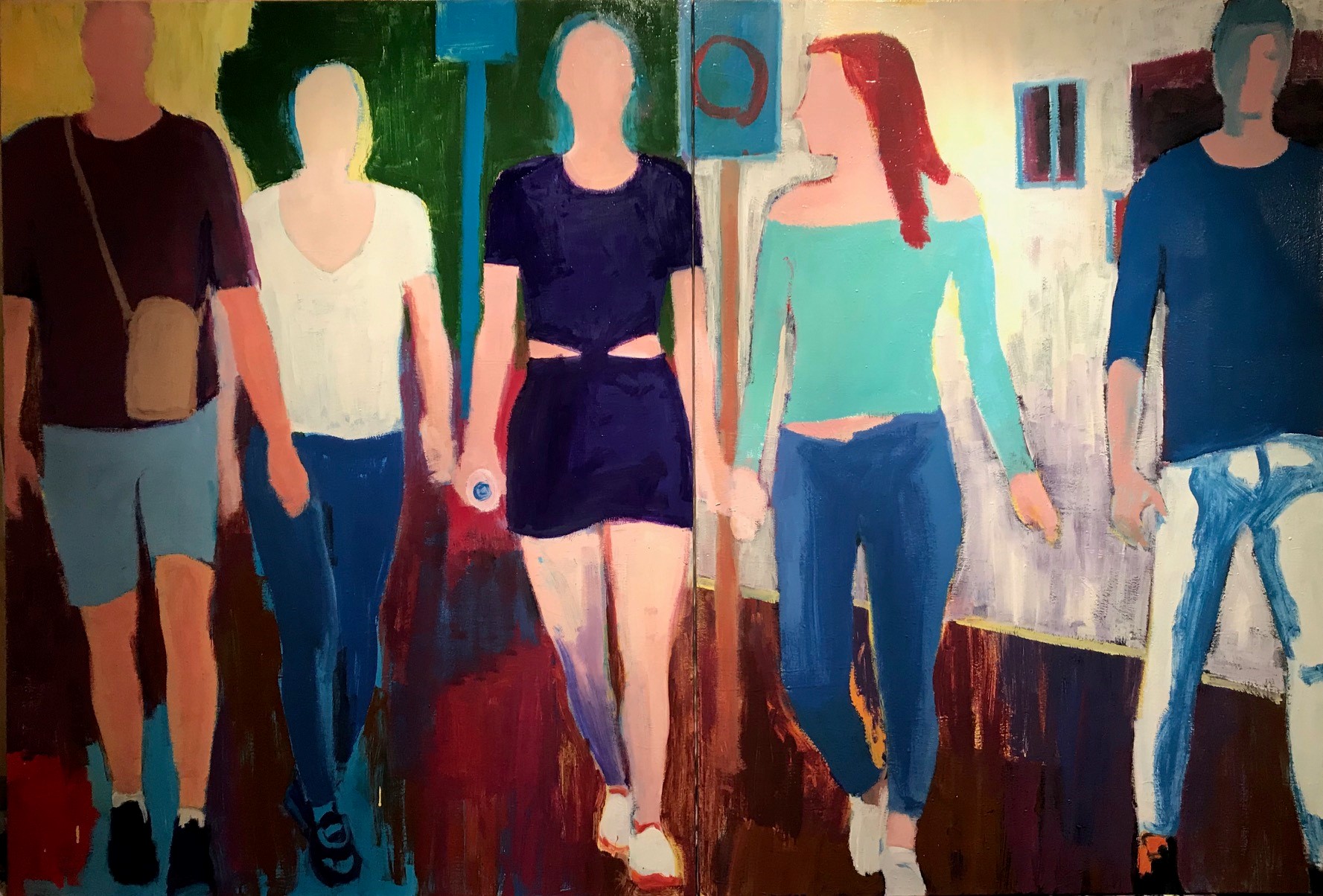