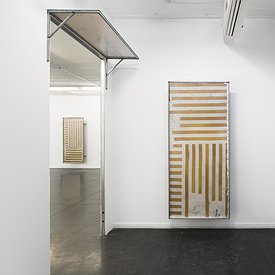 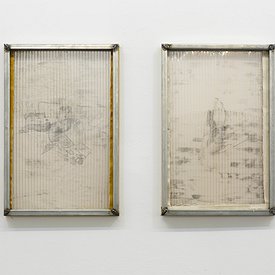 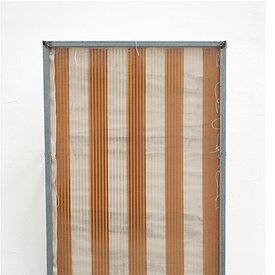 The artist's 2015 solo show at the gallery, titled Hobby, addressed themes related to the exploitative dynamics of political power and social order. Between 2015 and 2017 Shapira Kalter attended the MFA program at Hunter College in NYC. י' (Yod) is his first solo show since he graduated. This exhibition marks a turning point for the artist, who in recent years created works that would predominantly be attributed to institutional critique. These works were research-based, and emphasized criticality, knowledge and critical agendas. While still following an astute and intricate conceptual practice, the current show is focused more on questions associated with the gaze through looking at painting as an object. The exhibition includes a number of series of works, all of which bare monochromatic and non-figurative images – aesthetic arrangements that could be ascribed to geometric abstraction, Conceptual art, Minimalism and Arte Povera. Shapira Kalter's works are hybrids of fabric and construction, surfaces and pigments, sculptures and hanging apparatuses. They are made of distinctively local materials, such as tar, grease, tarpaulin, sunshades, polycarbonate, galvanized steel and Yod (Povidone iodine) - the medical solution as well as the 10th letter in the Hebrew alphabet. Most of these industrial materials were developed or employed by Israeli military industry, but they are also used by civilians for disinfection and sealing of structural and corporal lesions and apertures. These are materials we use to protect and shelter ourselves from the extreme local weather conditions (heavy heat, humidity, salinity, and infection). The Israeli sun, with its blinding and scorching UV radiation, is marked in this exhibition by materials that were devised to reduce its disturbance. They make up resilient surfaces that are constantly exposed to direct contact with the sunlight. Throughout his artistic process, the artist stretches, screws, stitches, binds, smears, wipes, pours, marks, and splashes these materials, testing their capabilities and response mechanisms. The attachment of the works to hanging apparatuses grants them modularity and opens up various possibilities of visual and corporal interaction between the works and the viewer. י' (Yod) also evokes the subjects of hybridity, landscape, and self portrait.

*The exhibition is accompanied by a publication consisting of two essays that Ishai Shapira Kalter wrote during his studies in NYC. In them, he describes his own perception regarding the state of contemporary art. The essays delineate an essential antinomy between the will and pretence of contemporary art practitioners to implement change in the civil reality in relation to the helplessness of their artistic acts, that are obedient to the rules of Contemporary Art.

Ishai Shapira Kalter was born in Ness-Ziona, Israel in 1986 and is currently based in Tel Aviv. He received his MFA from Hunter College, New York, NY (2017) and his BFA from Bezalel Academy of Arts and Design, Jerusalem (2013), from which he also studied at The Slade School of Fine Arts, London, UK (2011). Shapira Kalter's first exhibitions and projects were hosted by venues such as Veinti4/Siete Galería, San José, CR (2017), YARAT Studios, Baku, AZ (2016), West Space, Melbourne, AU (2015), RawArt Gallery, Tel Aviv, IL (2015), The Helena Rubinstein Pavilion for Contemporary Art, Tel Aviv, IL (2014), MoBY Bat Yam Museums, Bat Yam, IL (2013) among others. He received several fellowships, grants and scholarships such as The Jean and Albert Nerken Scholarship Fund, The Rabinovich Foundation Grant and the Israel Lottery Council for Culture and Arts Grant. 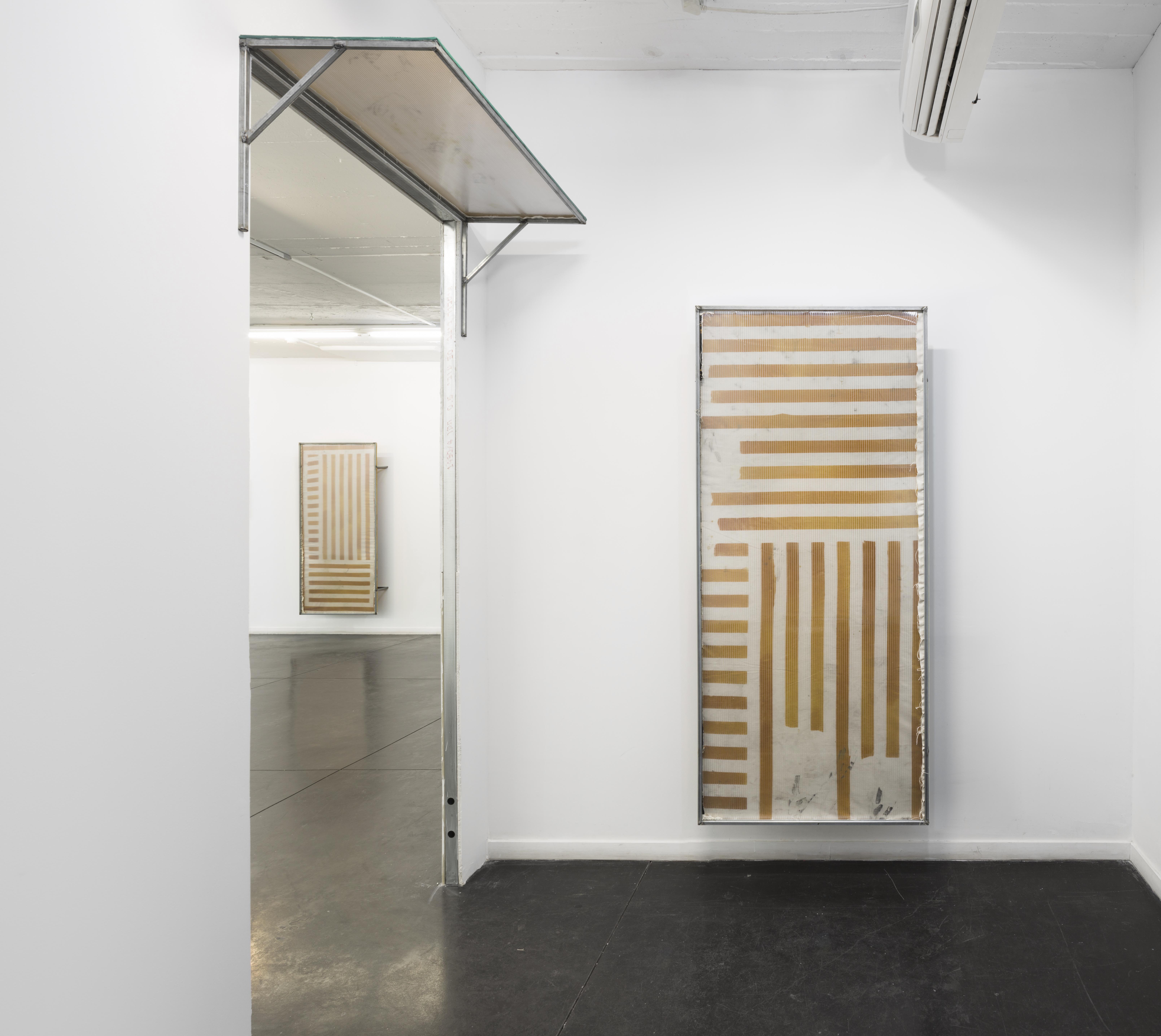 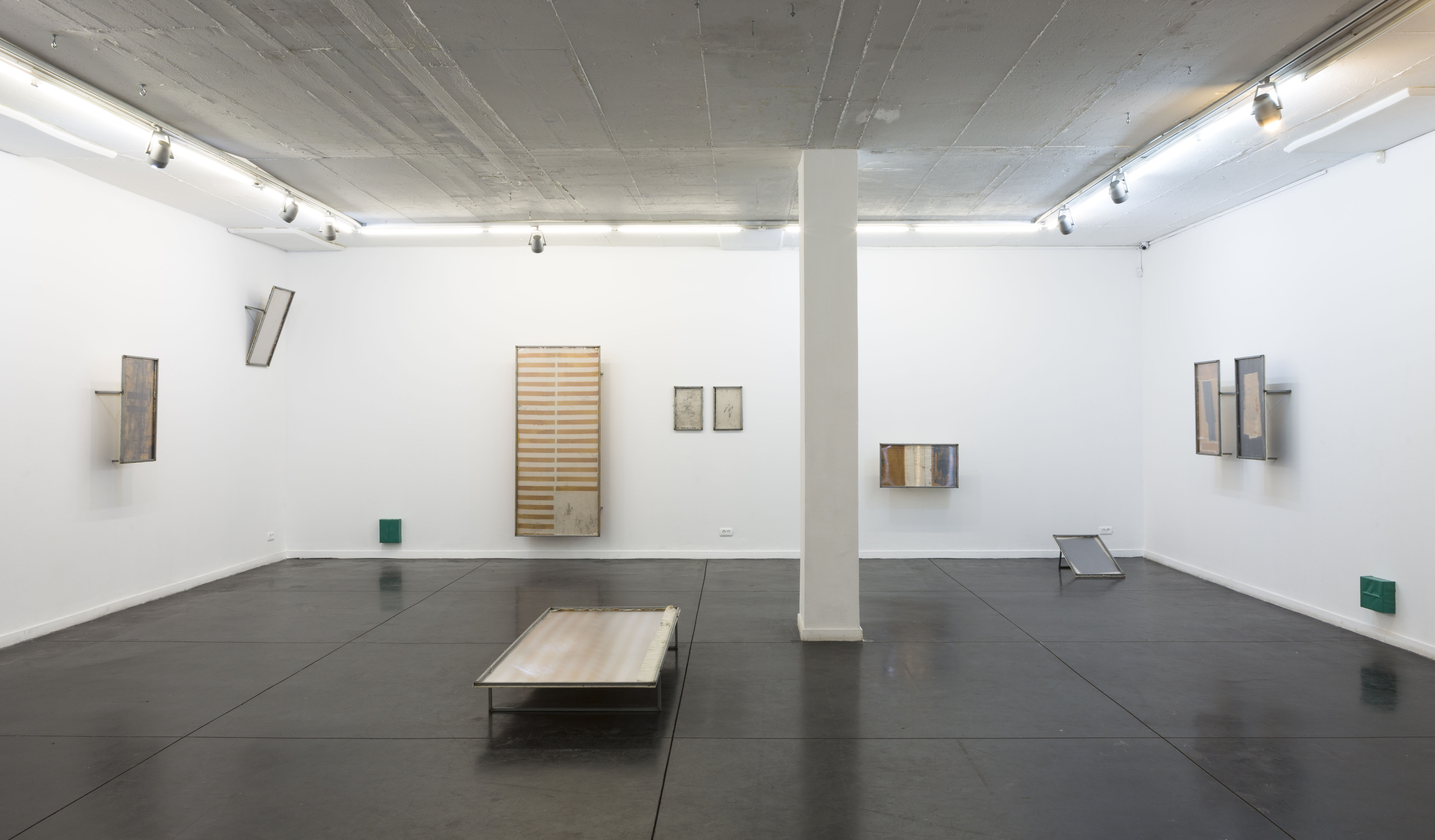 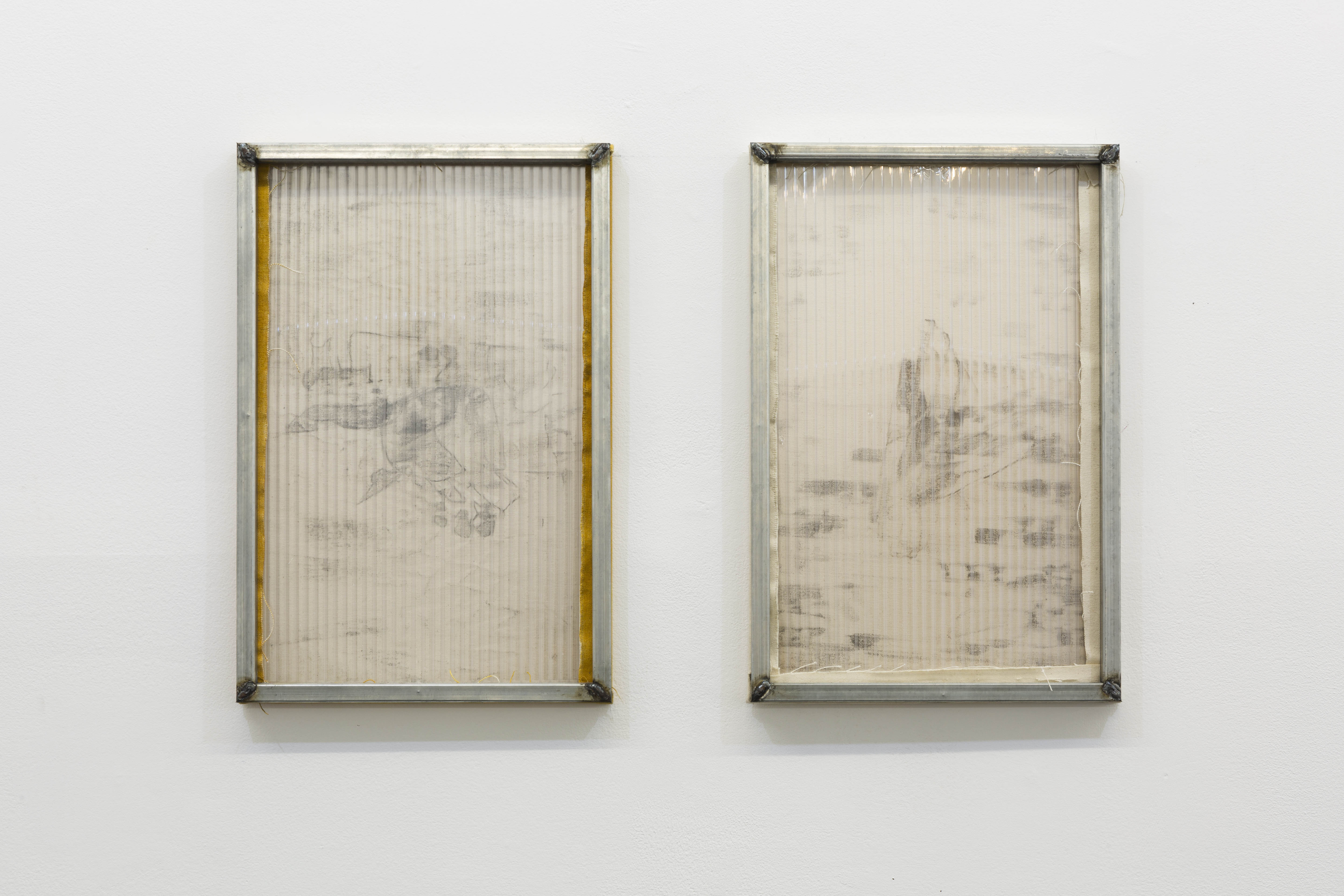 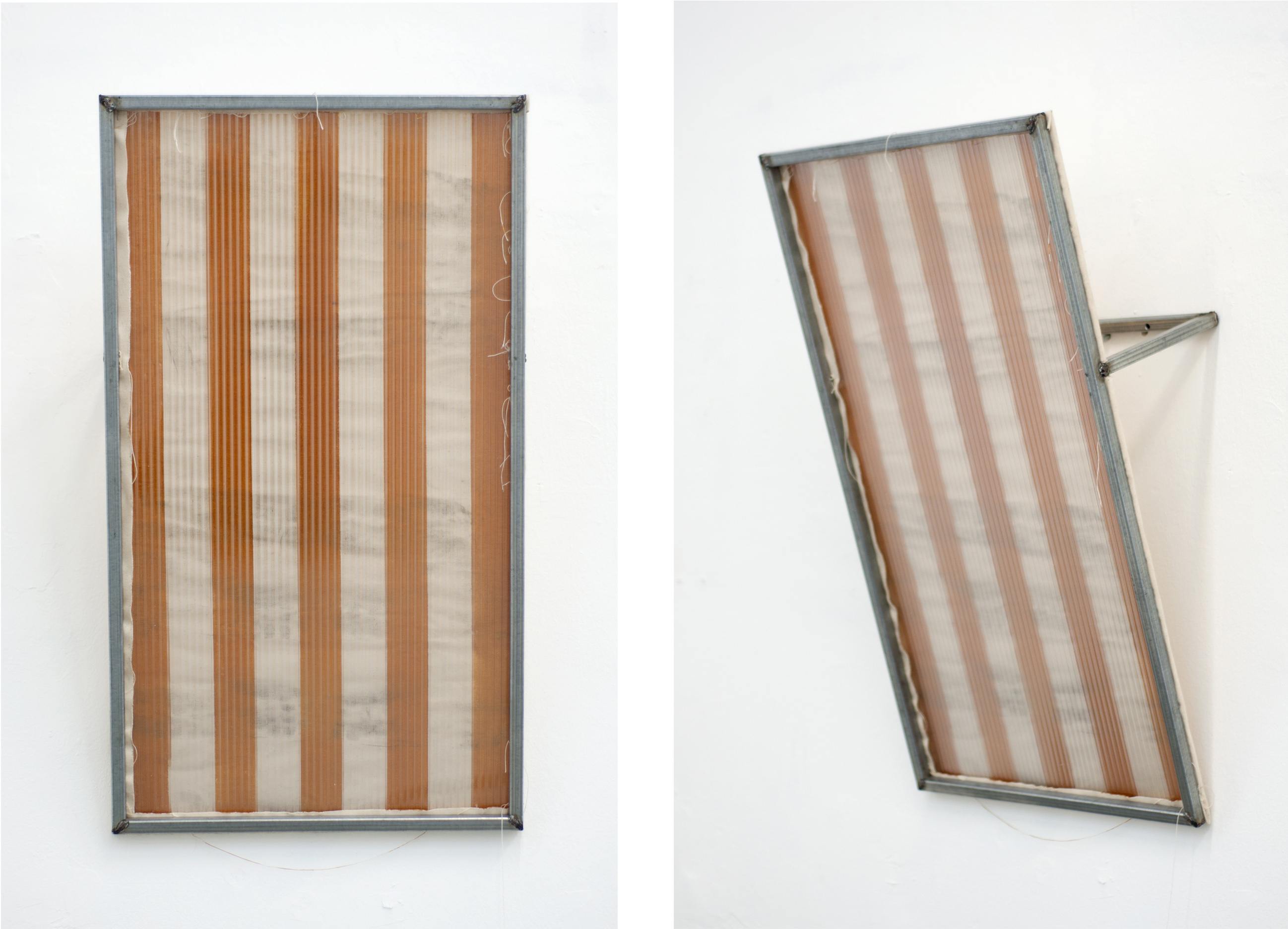