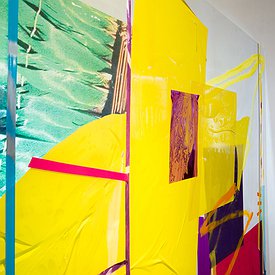 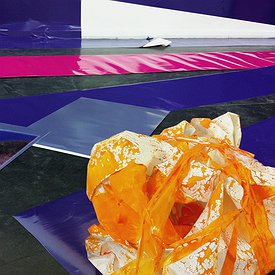 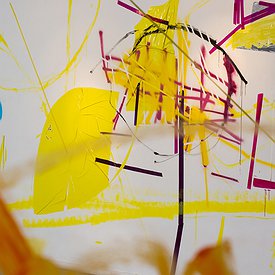 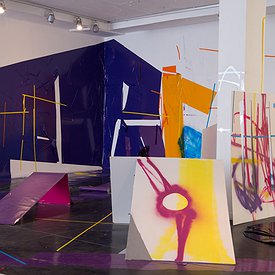 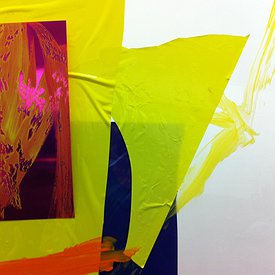 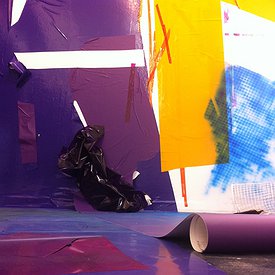 Iva Kafri creates paintings and installations in which she breaks down the basic elements of painting. She has developed a distinct style consisting of loose, expressively gestured abstract painting in intense colors and diverse materials such as acrylic, spray paint, wall paper, Plexiglas, foam boards, string and readymade photographs. She employs this style in both painting and installation and so creates a dialog between the two mediums, resolving questions in painting through installation and vice versa.

Naturally both mediums bring forth particular values, differing according to the distinct two dimensional quality of the canvas and the physical presence of an object in space. This distinction comes through in a number of factors: One is the practiced method of work required in the work process. As Kafri's paintings are created in a prolonged, gradual progression of work, while her installations stir from spontaneous improvised interventions with the specific space, within a constrained time frame; to the way in which the forms, materials and colors behave; to the relationship created between the work and the viewer, the emotional response they evoke and their relation to the body; to the lasting nature of the painting as opposed to the temporality of the installation, which is dismantled and gone forever as soon as the exhibition is over.

Despite these differences, there is no doubt that her work is fundamentally immersed in painting and that her installations are in fact three dimensional paintings. They invite the viewer to see the painting from within and experience the compositions from multiple and dynamic points of view. One may interpret her installation work as a combination between artistic practices developed in the two margins of the twentieth century- one is in the avant-garde movements that emerged following the invention of the camera. The other is in the evolution of the art installation in late 20th century, with emphasis on the positioning of the objects and their relation to the space.

Kafri's installation work may be seen as a certain solution to one of the main representational problems that painters have dealt with throughout history- the problem of the frozen stillness of the image. Countless painters have tried to portray a sense of movement and dynamism in their paintings, to portray reality in greater accuracy than the momentary representation of the frozen frame. These efforts may have examples throughout art history in general but it is greatly prominent at the end of the 19th century and the beginning of the 20th century, with the invention of the camera. With many examples such as the futuristic movement, Marcel Duchamp's works "Nude Descending a Staircase" and "The Large Glass" (the first is a formalistic interpretation to the subject, the other conceptual), and in a way one can also see Cubism and Impressionism as attempts to depict reality in a more vivid way- one with multiple perspectives and the other through dealing with the subject of time (returning to paint the same landscape in different times of the day or the year).

It is also interesting to think of the role of the viewer in these efforts to overcome the barrier of stillness. Viewers have cooperated with the suggestion of movement alluded by painters and walked around the Mona Lisa back and forth searching for her changing smile, imagined Monet's Water Lilies floating before them and sweeping them away down the lake, or Kandinsky's musical compositions coming to life and dance before their eyes.
The transition of Kafri's painting from the canvas into space, allows the viewer to walk around inside it and observe it from angles as diverse as his own movements in space – the compositions of the painting thus continuously change in a retinal- operated animation.

The composition is not restricted to a rectangle or fixed where the painter decided to place his brush, but has numerous points of view to choose from and for this reason, though it is an abstract painting, has qualities that are representative of life in an unquestionably honest and direct manner.

"You can not make a gesture on canvas the way you can on a wall", Interview with Iva Kafri about her Solo Exhibition, recently was shown at Raw Art gallery @ Erev Rav Magazine, 29.7.13 (In Hebrew) 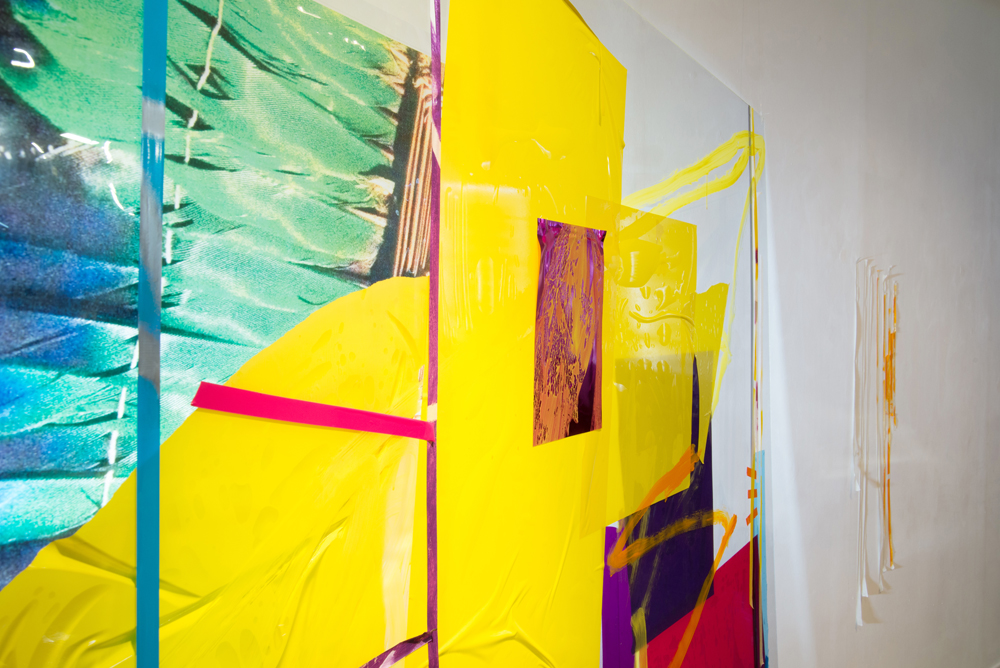 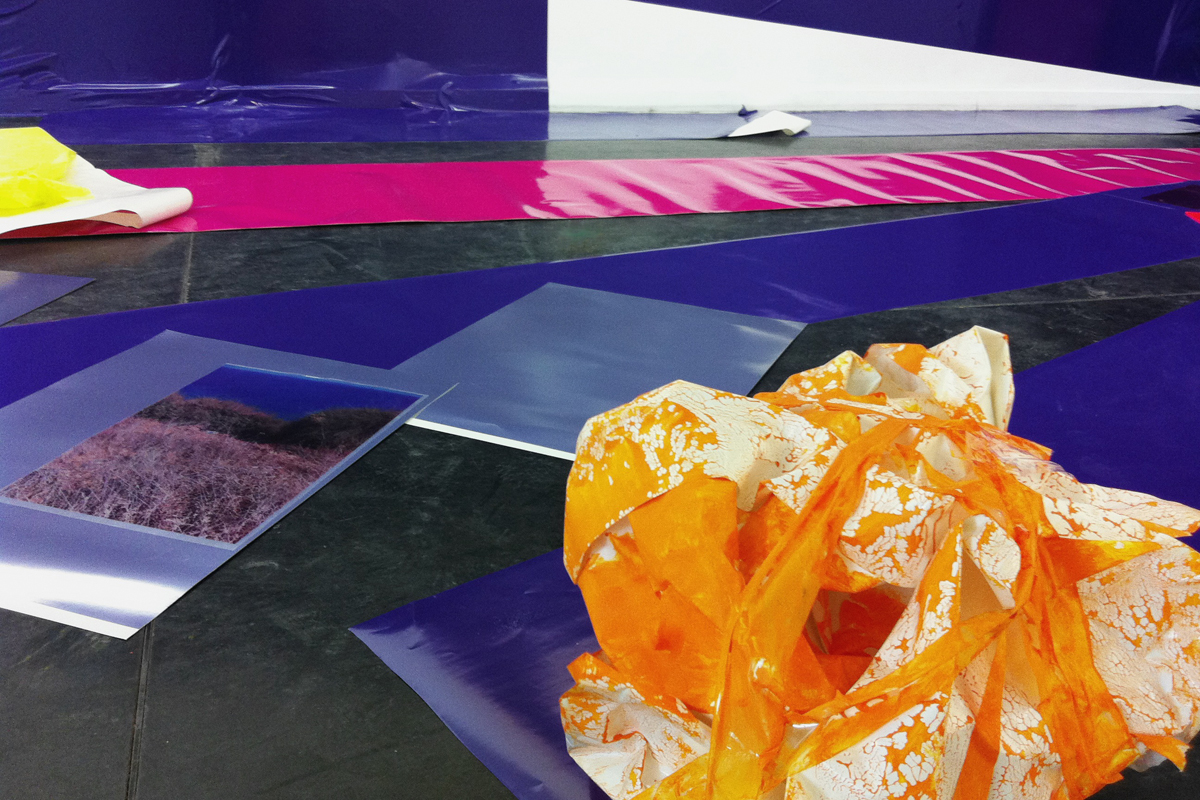 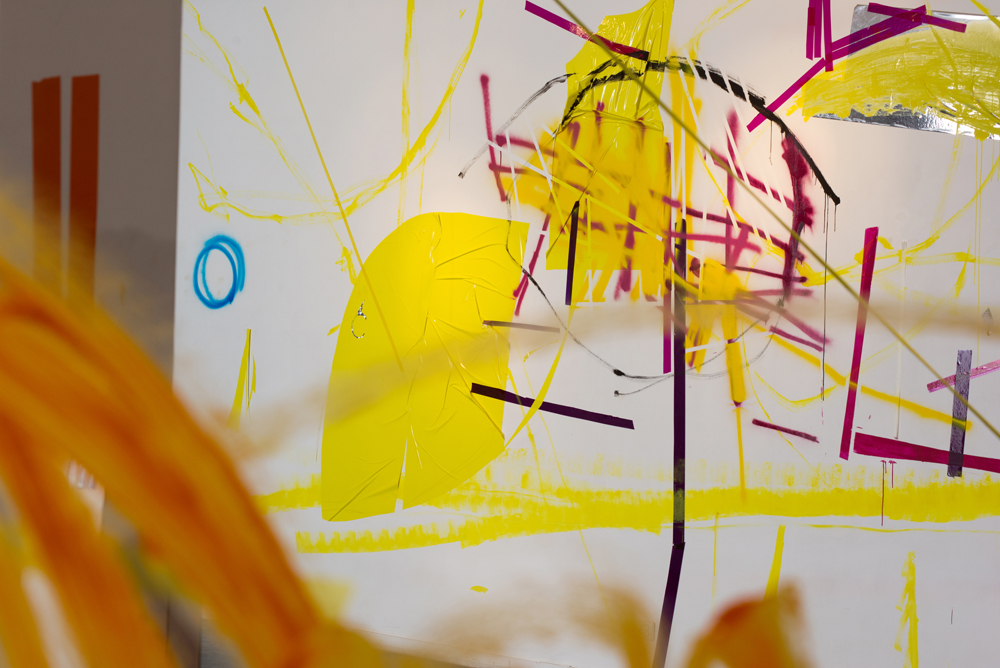 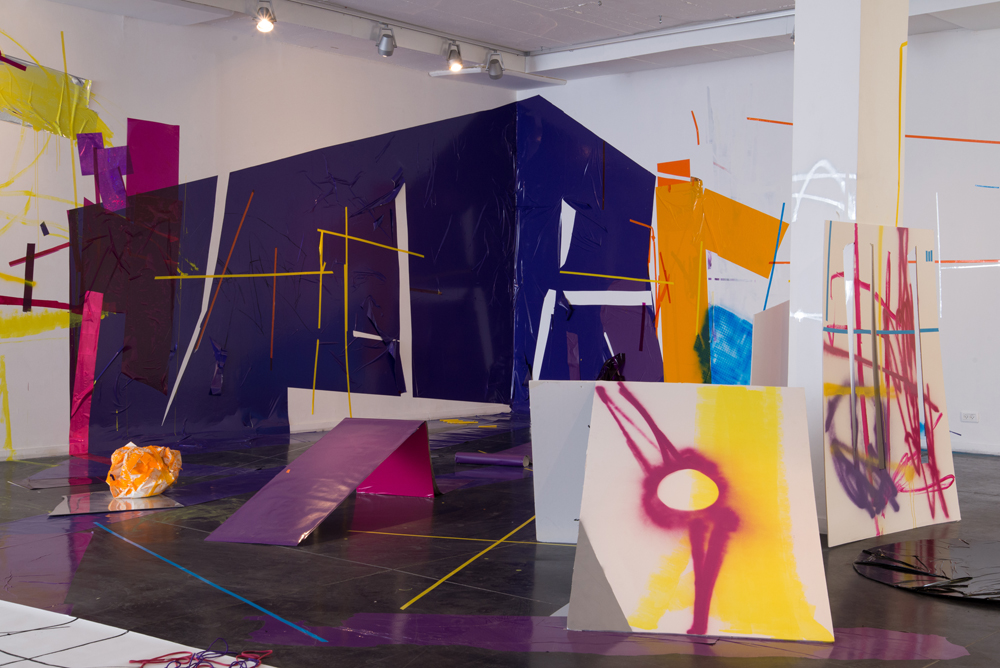 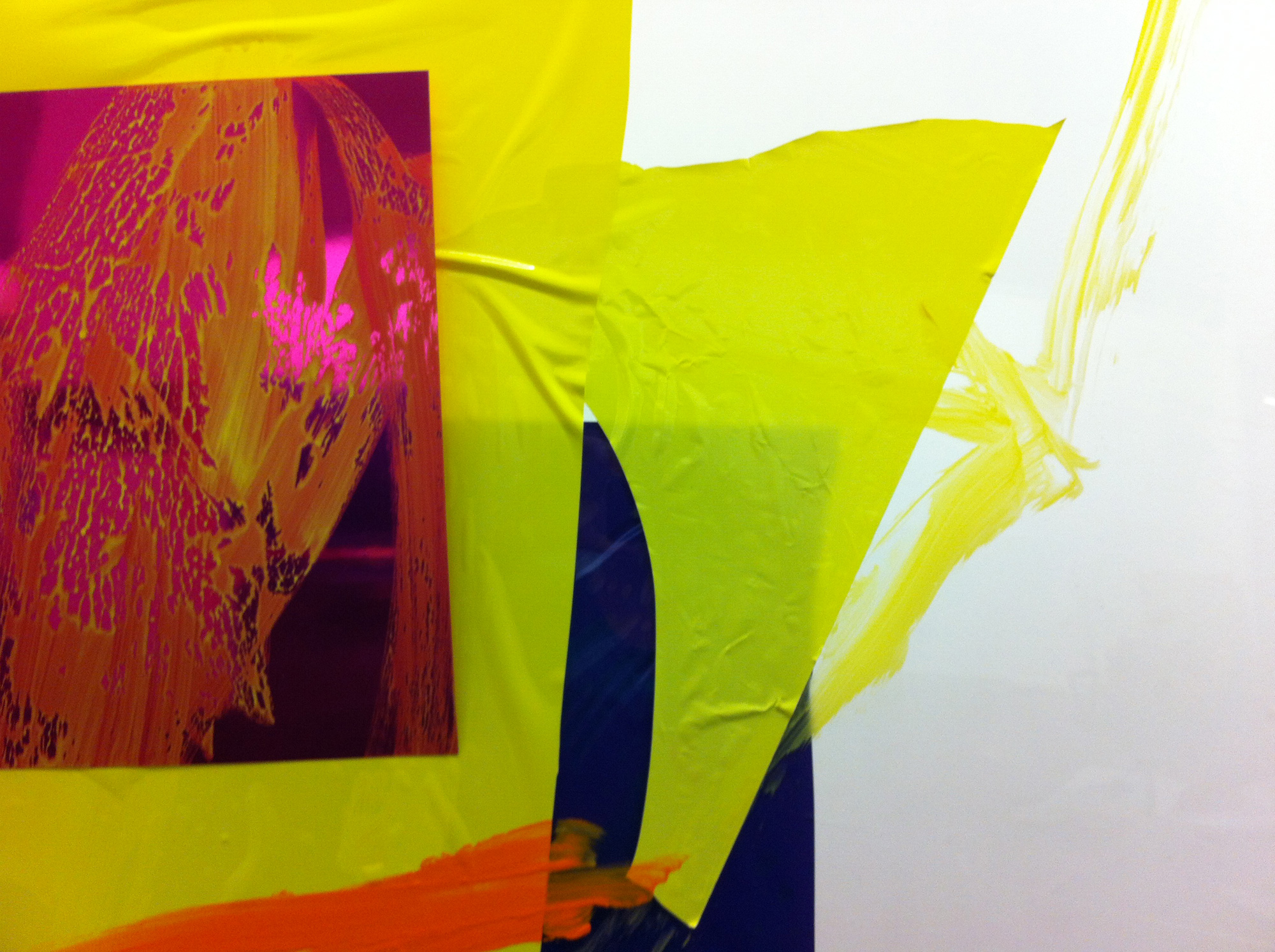 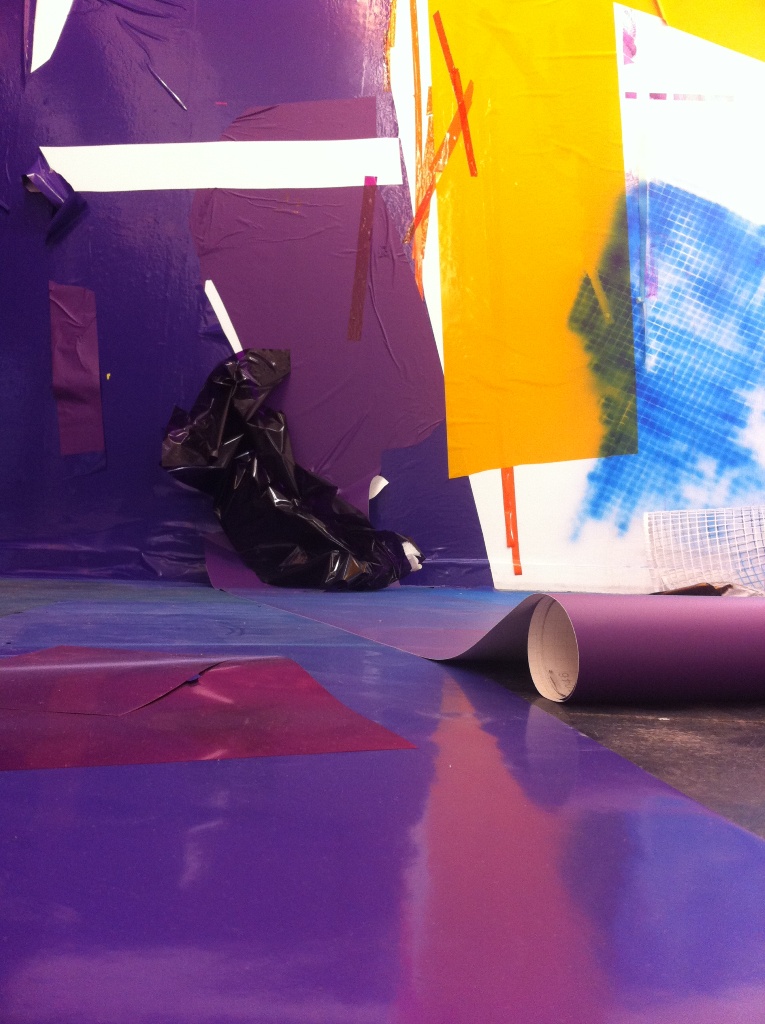