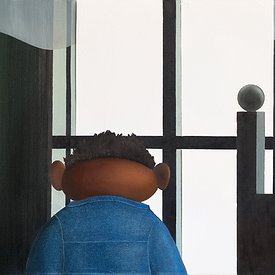 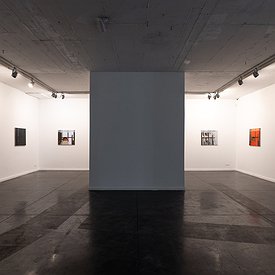 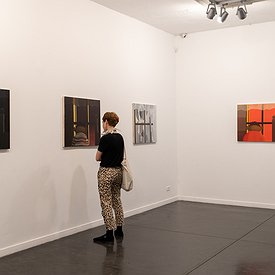 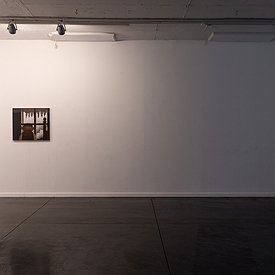 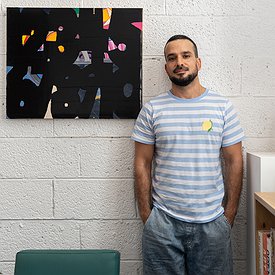 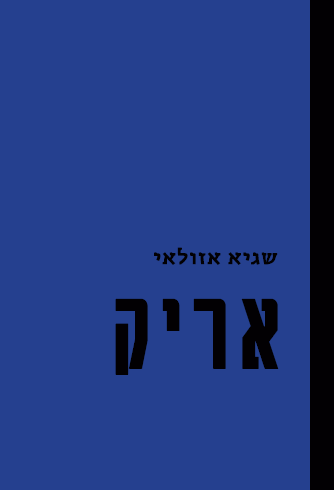 "This is how we see the world. We see it outside ourselves, and at the same time we can only understand ourselves from within."[2]

In one of the episodes of the children’s TV program Sesame Street, there is a blackout. The frightened Ernie tries in vain to wake Bert, his roommate and perpetual dupe for pranks. He suggests that they watch TV together, or listen to music, but Bert sends him back to bed, all alone. Ernie gazes out the window, watching the dark.

After years in which he has painted figures at all, and has focused on ritualistic objects and relics from ancient cultures, Azoulay is captured by Ernie's moment of observation; he freezes and reproduces it. He opens painted windows in the gallery's walls, framing the views outside, shutting Ernie within the room, again and again, still alone. A rag doll set in cardboard scenery takes on human attributes – desire and conflict – and becomes a pure, simple form of (human) existence vis-à-vis the world. In the center there's the window, which functions as a threshold between interior and exterior, between near and far. Out of the freedom the repetitiveness affords, the painter can investigate over time the mental state the protagonist is trapped in, and also undermine the relationship between object and subject.

The background seen through the window is painted in Acrylic, while the interior and Bert's figure are done in oil that appears to hovers above the nature scene. The patterns and textures in Ernie's clothes underline his inner state, which is aligned with the exterior landscape, or, conversely, projected on it. In the works where Ernie is painted on top of a silkscreen print of leaves the merging with the outside is enhanced, the structure falls apart, and Ernie is gradually freed.

Azoulay's pictorial language removes excess illustrative details from the painted scene, exposing, through his hand and eye, a hidden truth that is connected to the everlasting spell of the object. A perfect sphere is set on a post, looking like a three-dimensional simulation of a bedstead. The white trees in Snowing  are reduced to cone-like shapes that capture their texture and their upward movement. Other objects acquire layers, scratches, and elimination of material, a process that recreates them in the painting with tangible volume and texture. Through its sculptural essence the painting points to the object and becomes it. The window, similar to the action of the eyelids or the boundaries of a painting, frames the gaze. Through the windowpane the whole world turns two-dimensional and appears to be projected like ambience images of the seasons that keep changing on a screen. Ernie remains locked in the circle of windows, and the viewer is trapped between Ernie's back and the back of the wall erected at the center of the gallery. The eyes do not meet. The circle of gazes is incomplete.

Sagie Azoulay (b. 1979) lives and works in Tel Aviv. He holds a BFA and an MFA from Bezalel Academy of Art and Design. He is the recipient of the 2019 Prize to Encourage Creativity by the Ministry of Culture, the Osnat Moses Young Artist award (2014), and the Lauren and Mitchell Presser Award for Excellence in Painting (2012). He has had solo shows at Hamidrasha Gallery in Tel Aviv (2016), the Artists’ House in Jerusalem (2014), Chelouche Gallery for Contemporary Art in Tel Aviv (2013) and Sommer Contemporary Art in Tel Aviv (2015).  His works have been shown in various group exhibitions in venues such as Tel Aviv Museum of Art, Vacation Gallery in New York, MoBY (Museums of Bat Yam), Petach Tikva Museum of Art, Ashdod Art Museum, Bar David Museum of Art and Judaica and the Genia Schreiber University Art Gallery, Tel Aviv. 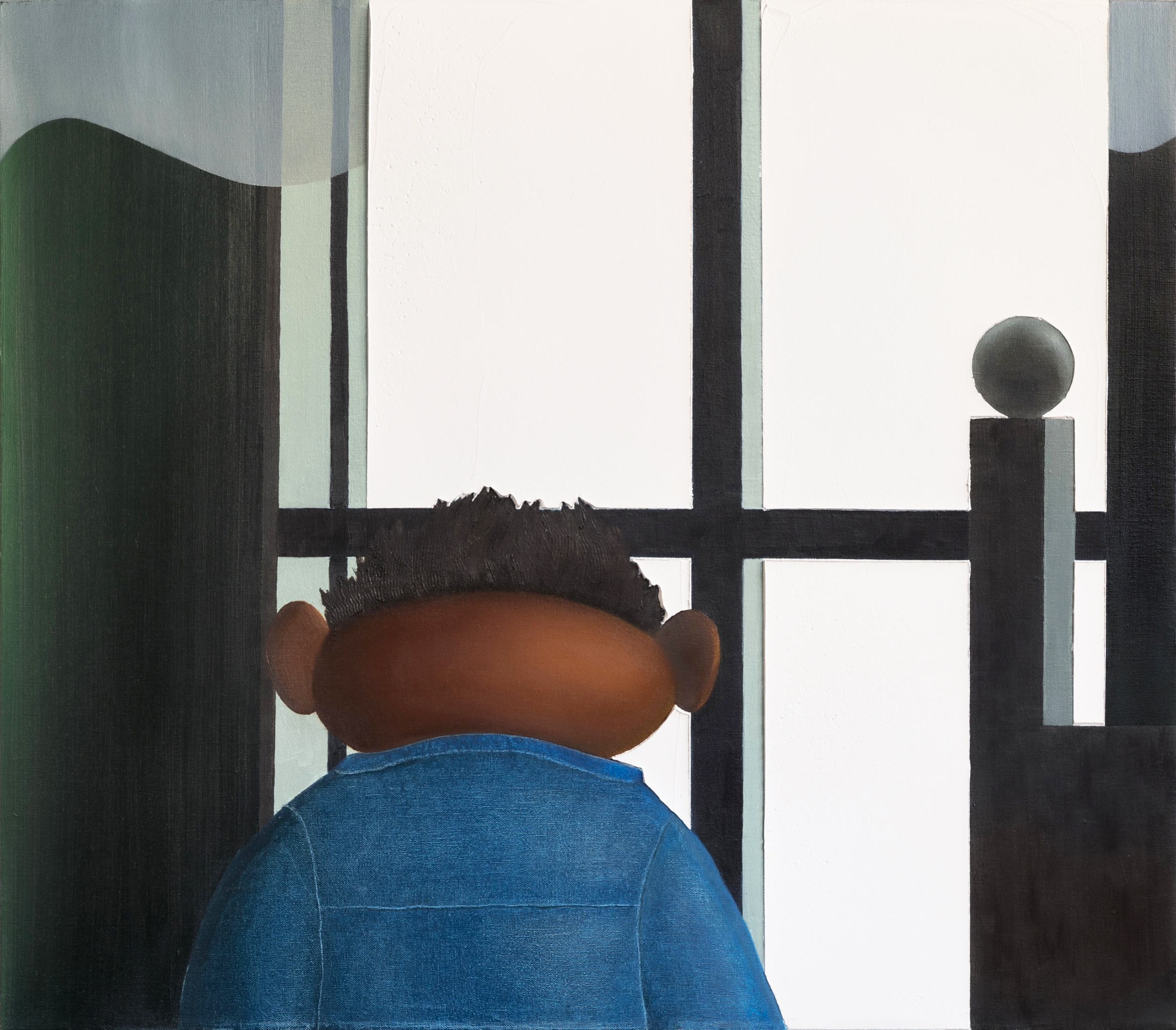 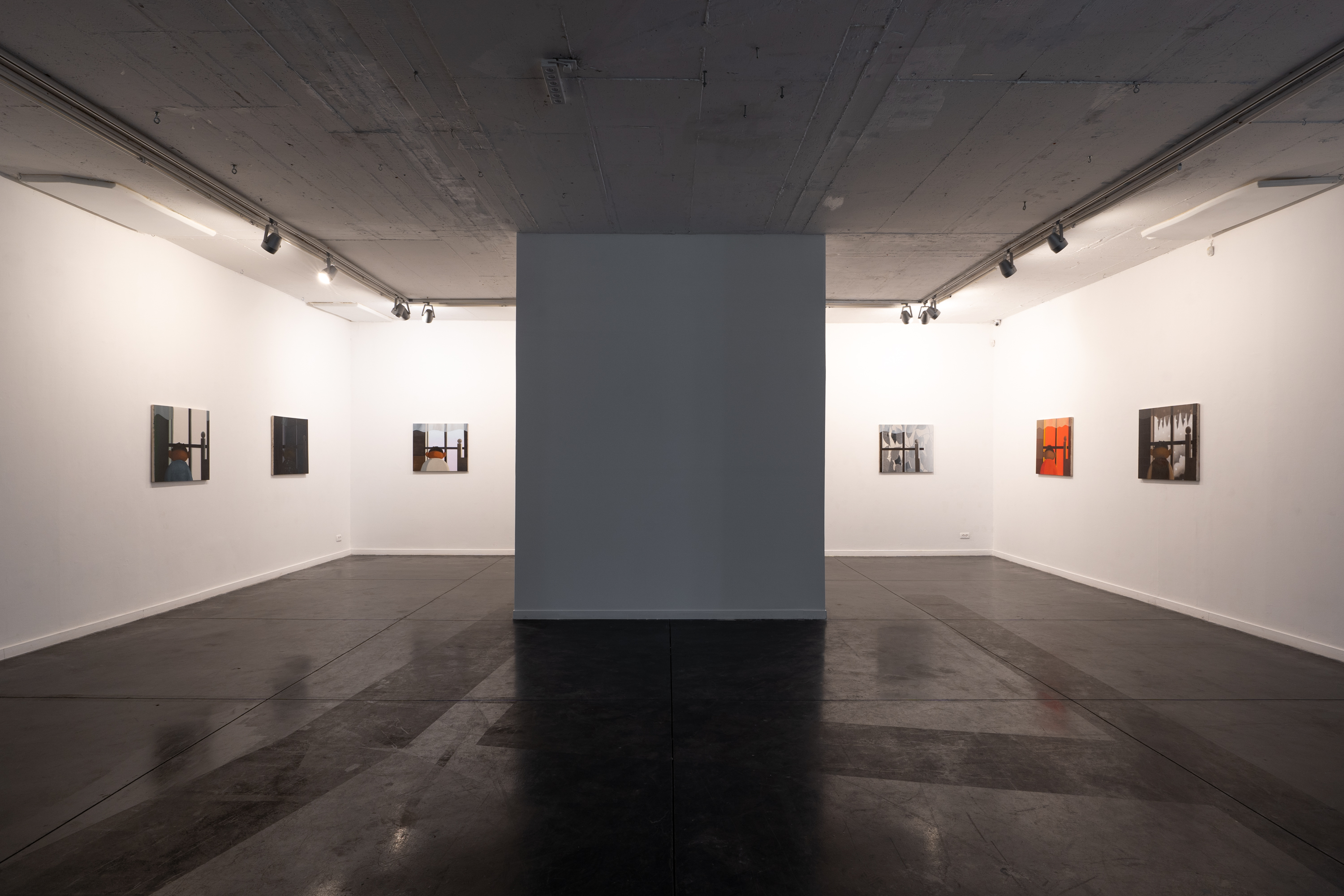 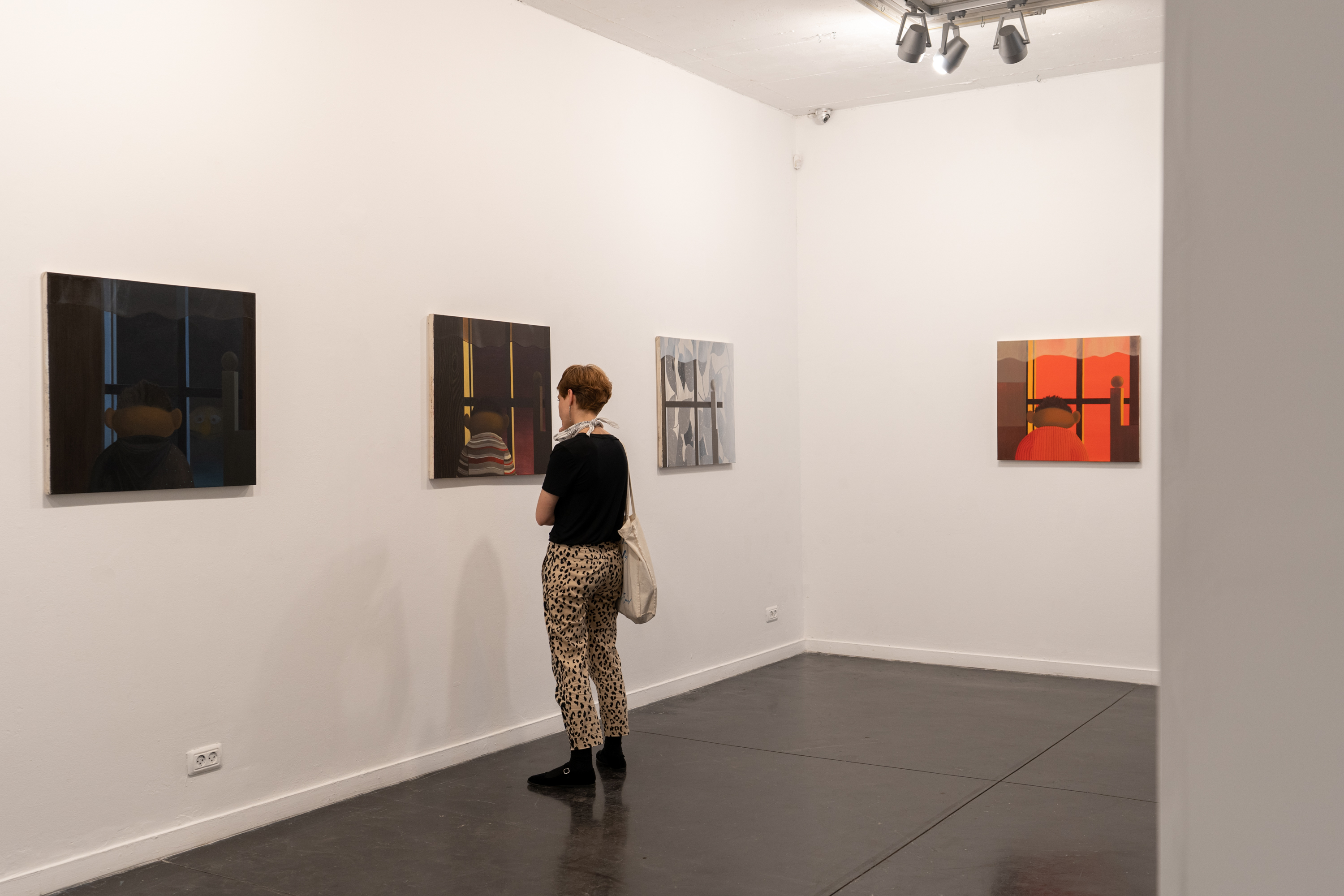 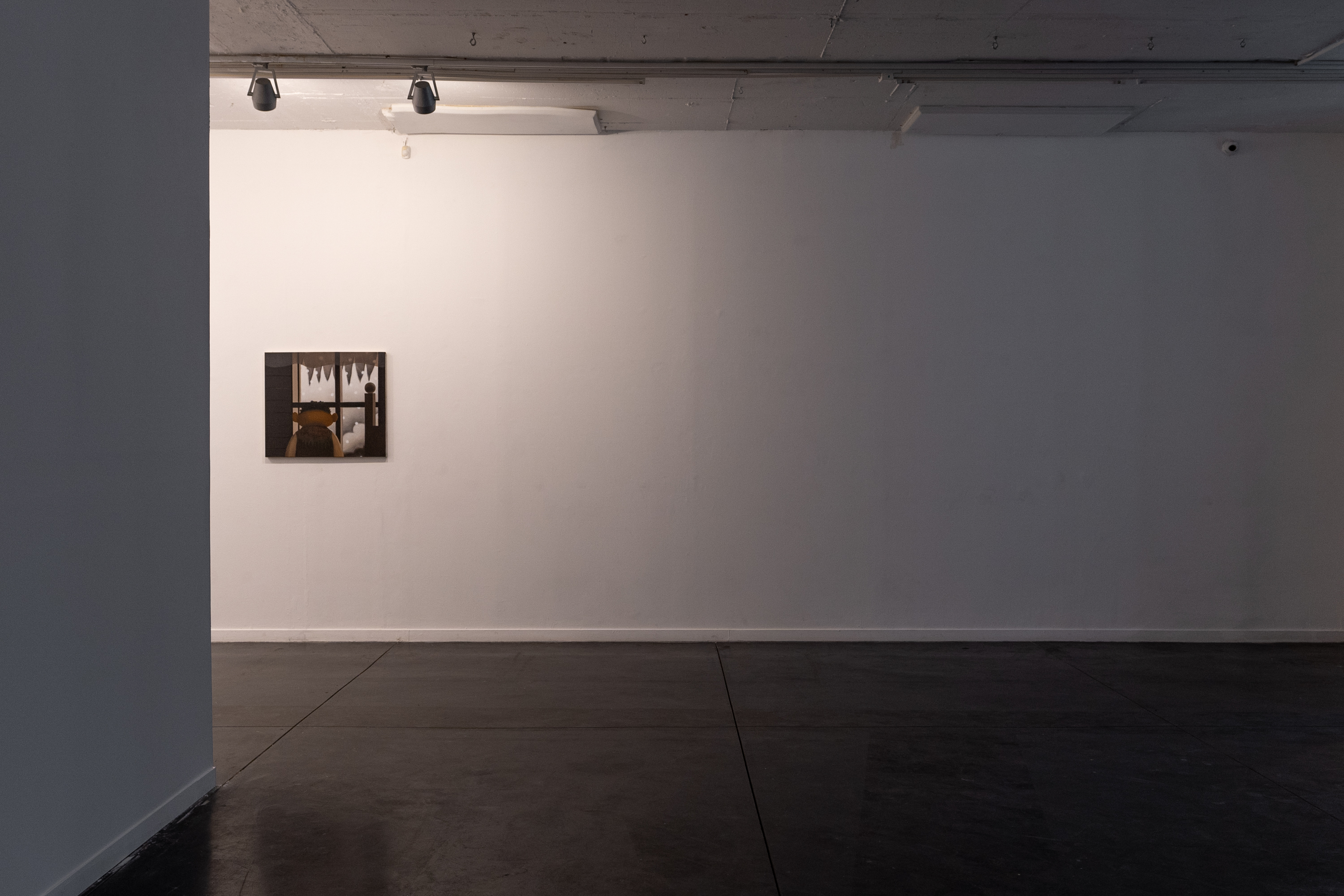 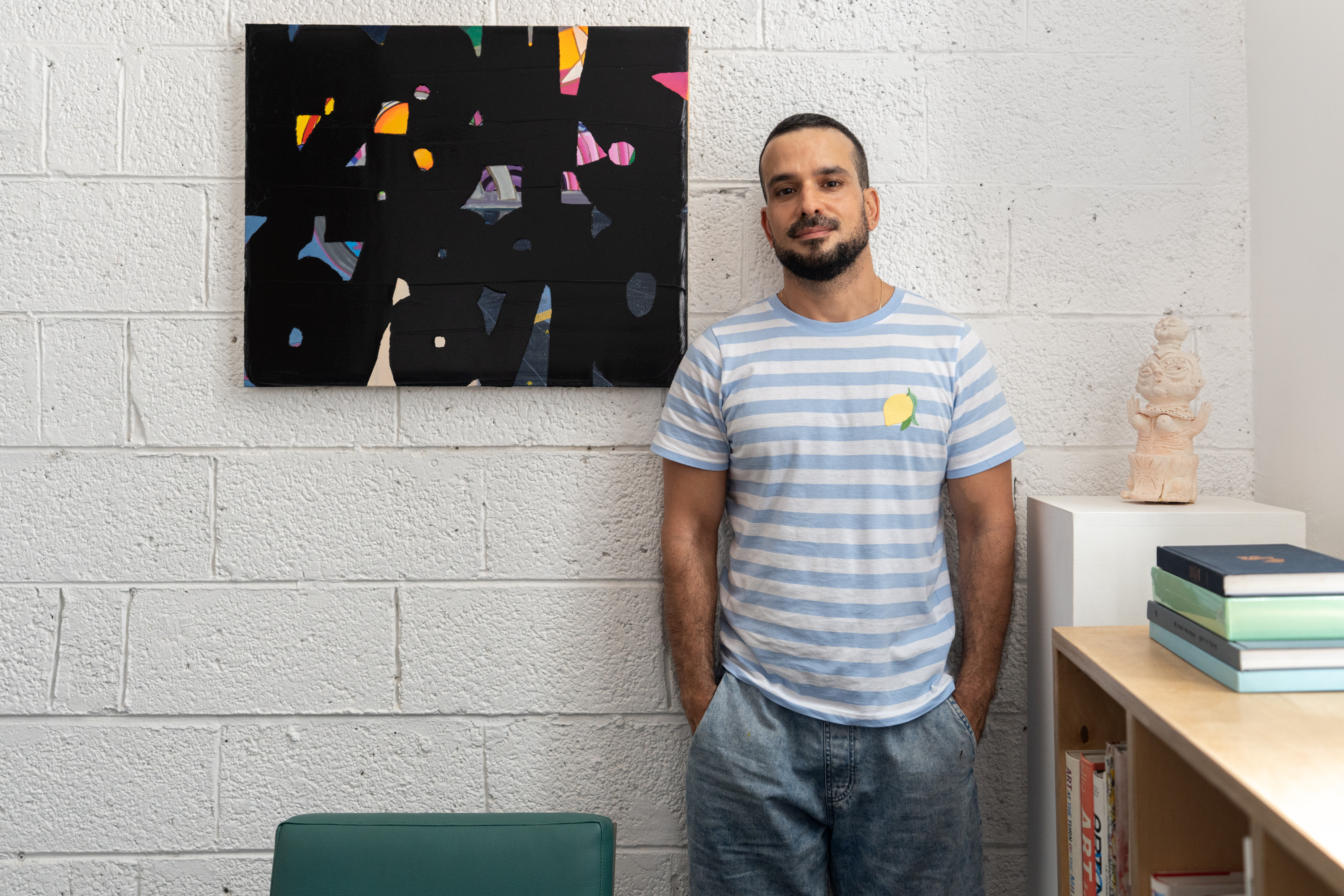