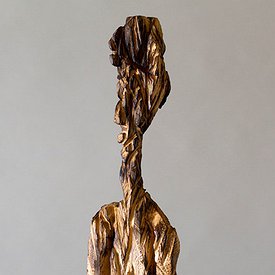 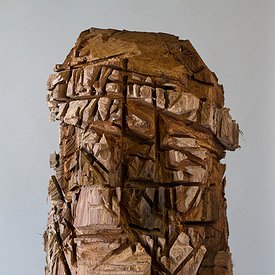 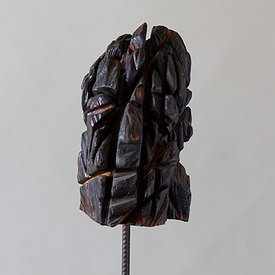 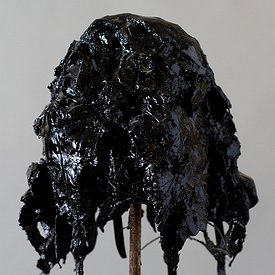 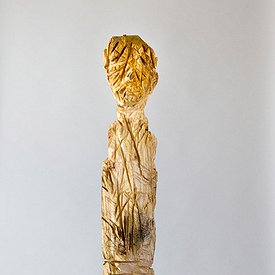 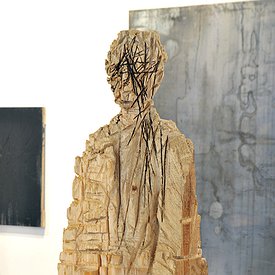 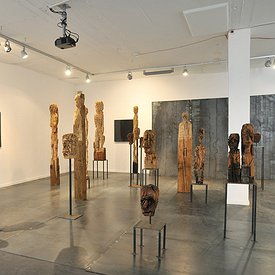 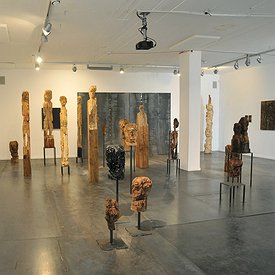 Shahar Sivan works like a crazy butcher, aggressively slicing his material, revealing its raw condition, studying its structure and reducing it to its basic construction. His works look like an accumulation of rough scars, evidence of a forceful, even violent approach to the material.

His figures lack specification, their facial features and body shapes are general and impersonal. A review of Sivan's work in different media reveals that on the technical level, this stylistic approach stems from a drawing based study in line. However the transition to wood cutting (in two and three dimensions) gives the impression there's something more to it. The structural lines of the figure seem to charge in greater emotional intensity, since the material calls for greater physical pressure.

It may be said that in the combination of abstract figurativeness (which doesn't seek to reliably portray the figure) and expressive style, the figure becomes insignificant, supposedly giving the artist an excuse to express his own temperament. That his work may be interpreted as traces of emotional outbursts in the manner of Jackson Pollock and Action Art. It is evident that Sivan's demeanor comes through vividly in his works; however the junction in which he departs from Pollock, is the humanistic outlook through which he perceives the world. His outlook believes in a hierarchal structure of the art work, in its logical foundation and in a figurative anchor for the viewer's identification.

The same humanistic outlook emphasizes the contradiction that in spite the figures non-specific form, Sivan gives them names. Several are named after people from his personal life- his parents, partner, friends, neighbors and students; while others are given names of human archetypes or icons such as "Jesus", "Madonna", "Death", "Femme Fatale" and more.

Combined together, these characters create a mutual "Family (of man)" hierarchy. Sivan's relatives thus become archetypes of parenthood, romantic intimacy, friendship, etc'. The implied form of the face and figure therefore turns them into super- representations of themselves, an "every-man".

Lately Shahar Sivan and I met to prepare for the show in a coffee shop not far from the sea. The hour was close to sundown and the sun was practically blinding as it began to come down. Shahar was sitting across from the sun and asked me at one point to change places with him. At first I thought he was asking because I came with sunglasses and he didn't. But when I sat in his place, he said "look at these people sitting next to us, look how beautiful they are". I could hardly see them because of the sun, only large black shades of people. He smiled "That's what I try to do".

Due to the theatrical aspect which may occur in an installation of figurative sculpture, we chose to create fluctuations between different methods of display in the exhibition. Thus the components of the central installation are exposed and exaggerated- from the podiums, to the iron floor which on the one side abruptly stops and on the other glides over the wall. Additionally certain areas of the gallery are designed in a refined "galleristic" style, by so contradicting the affect of the installation and creating an aesthetic distance from the works. Furthermore the miniatures recall something between Museums of Archeology to religious memorabilia shops, thus commenting on both religious and artistic Animism. 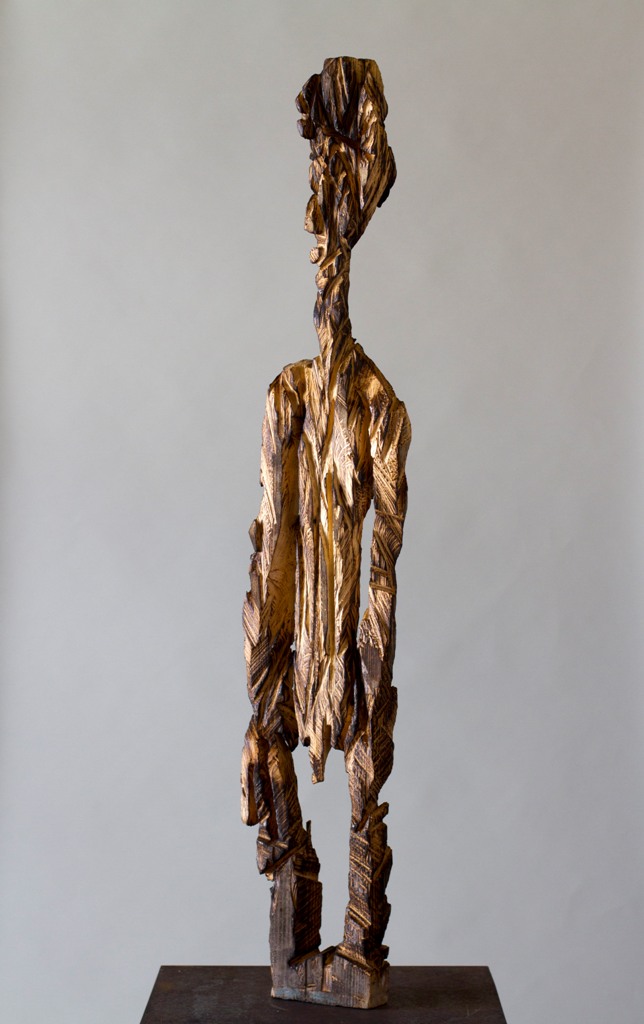 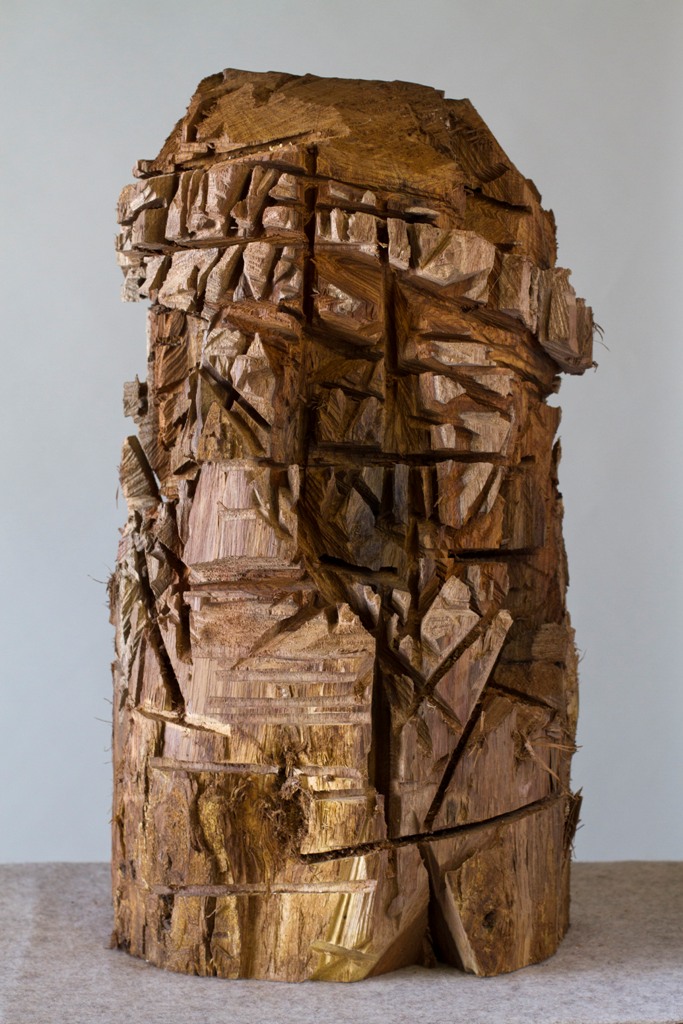 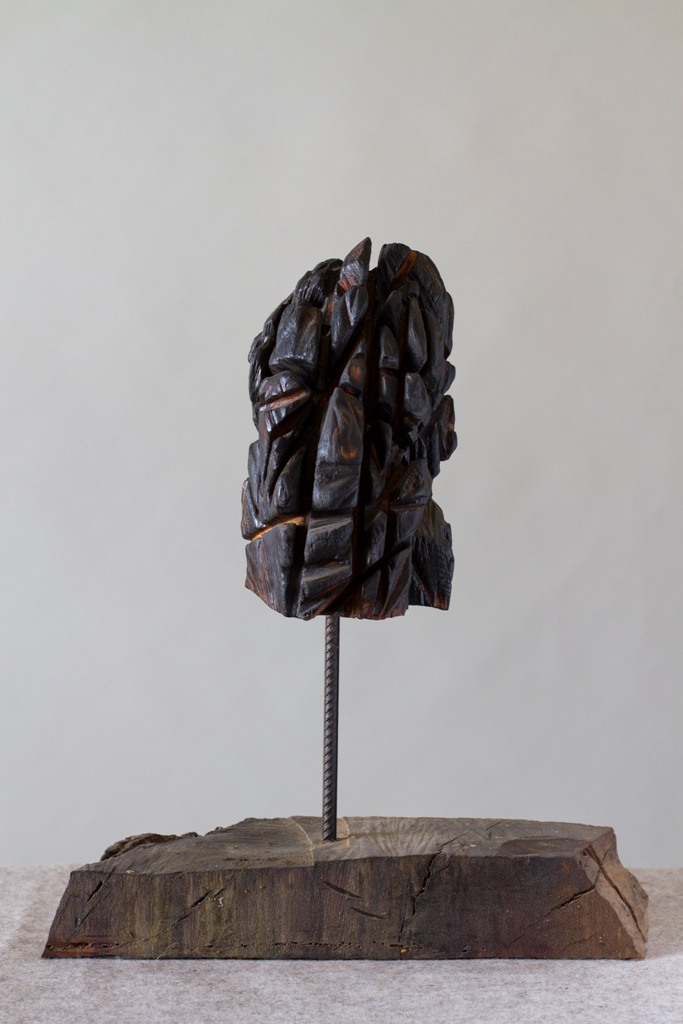 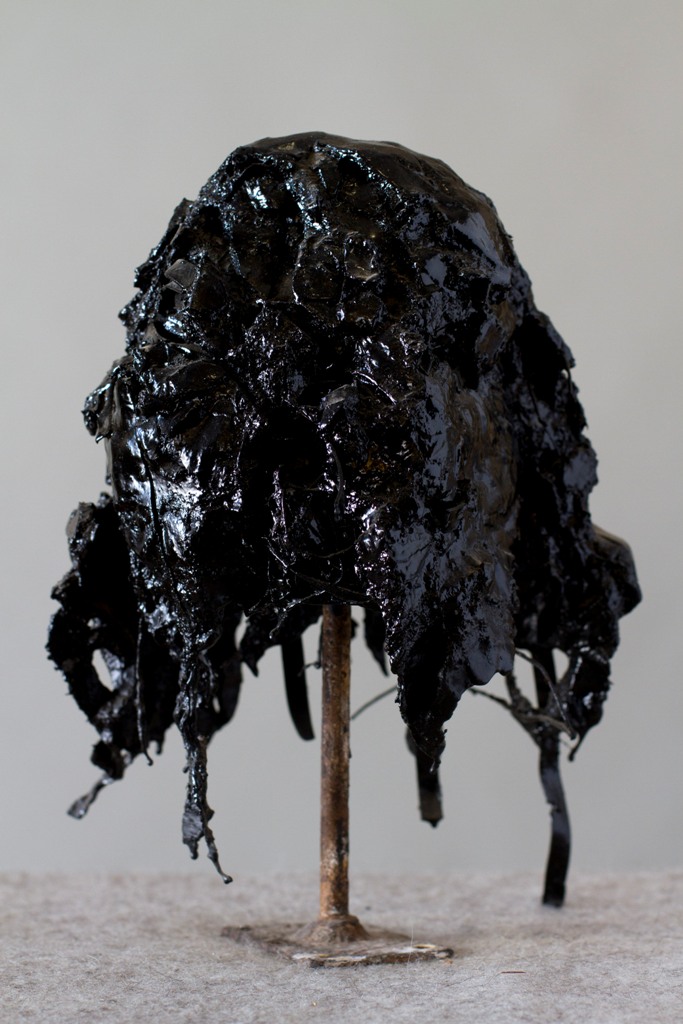 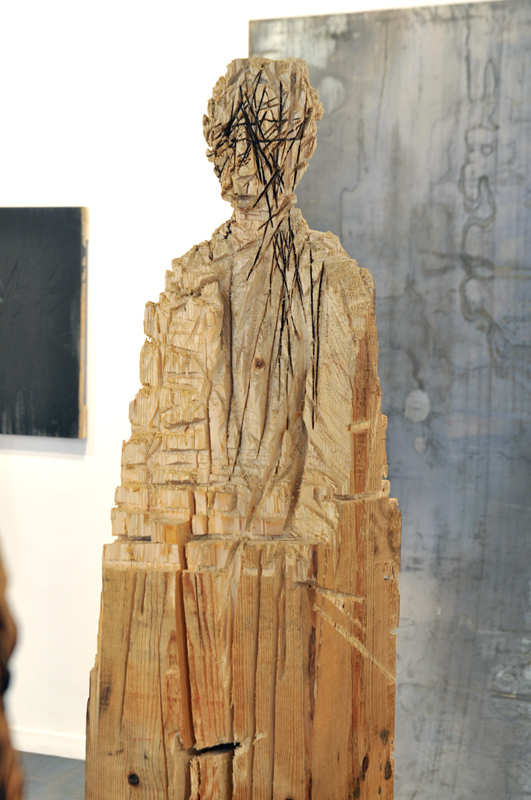 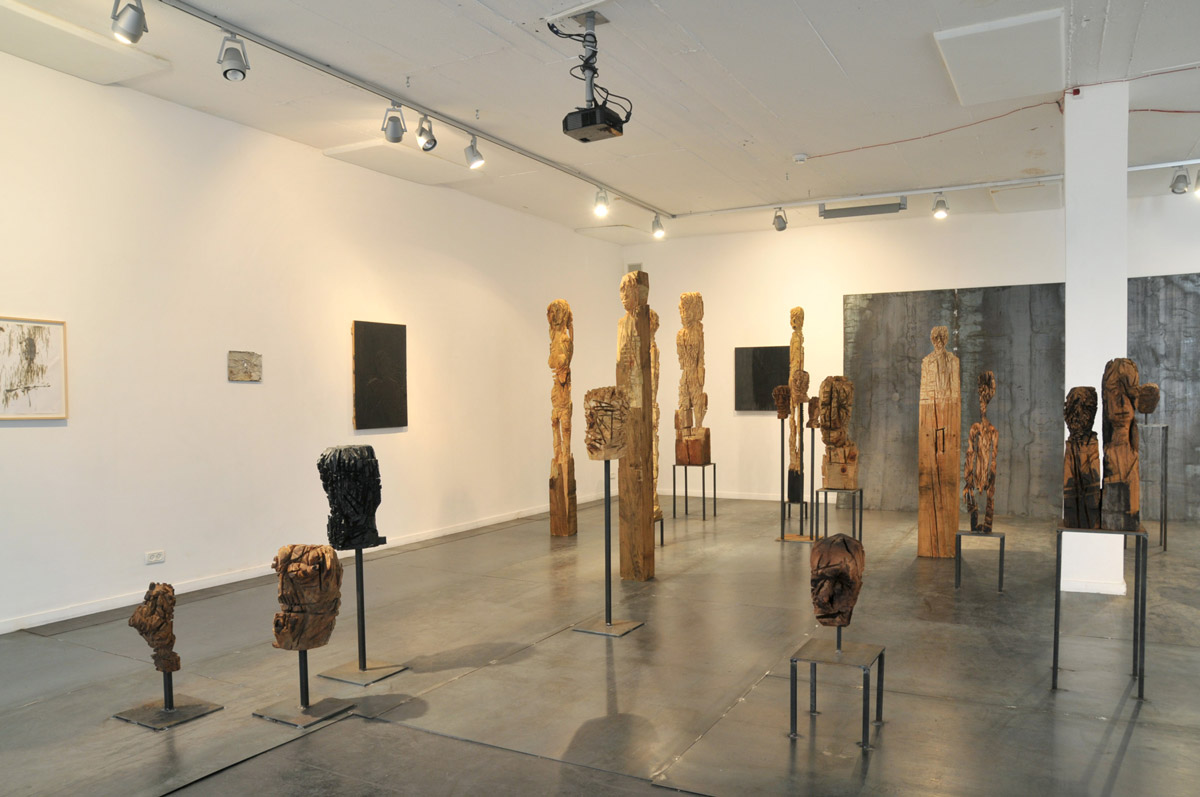 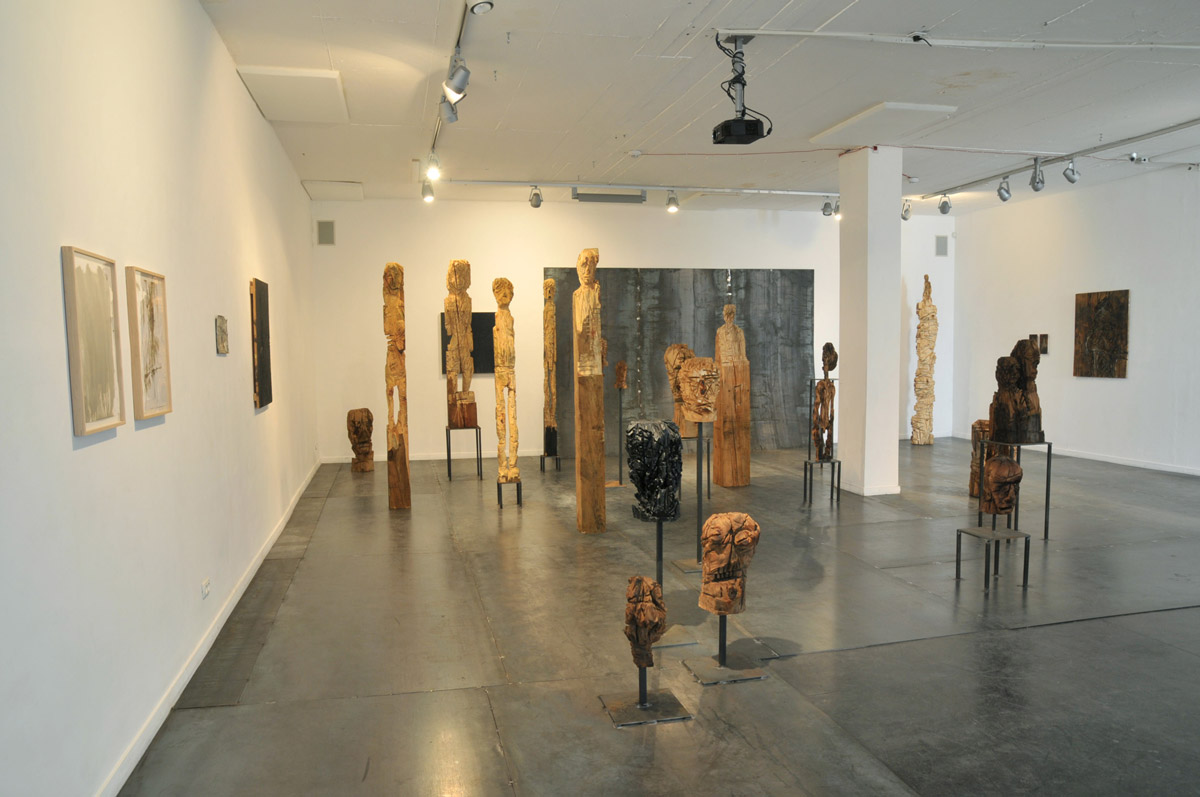