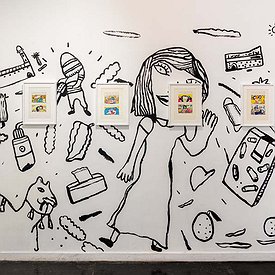 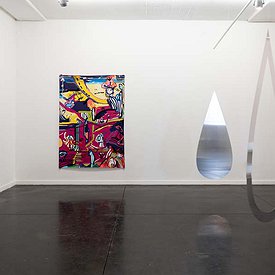 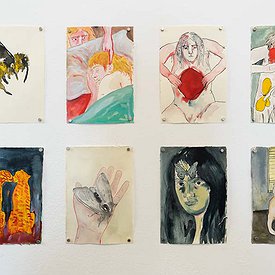 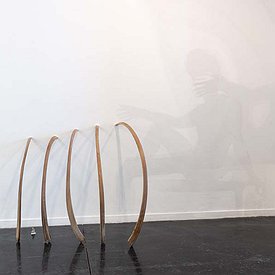 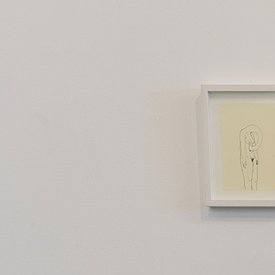 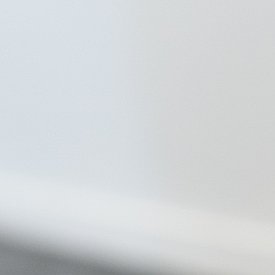 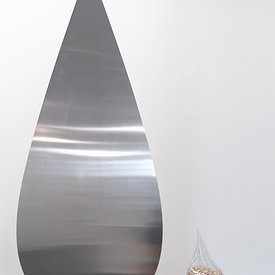 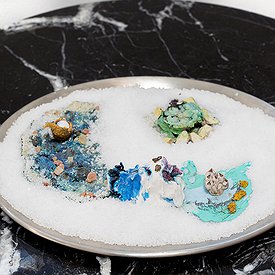 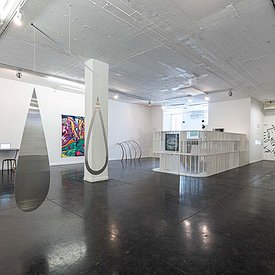 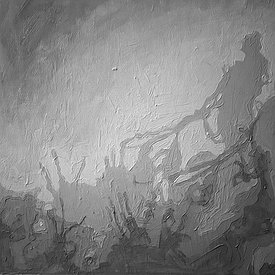 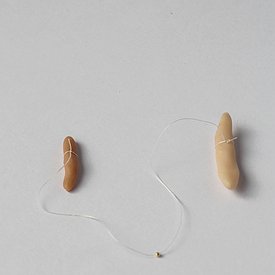 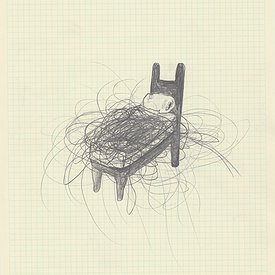 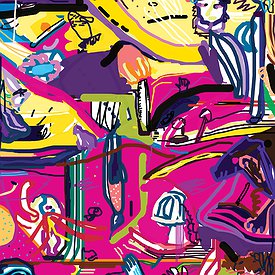 Shuttle is a project dedicated to the promotion and representation of artists at the dawn of their professional career. The first class of Shuttle includes David Duvshani, Noga Farchy, Yoav Fisch, Ido Gordon, Maya Perry, and Dana Tannhauser.

Shuttle opened in an evolving exhibition during which each artist occupied the gallery space for a week while it remained open to visitors. The results of each week’s work accumulated in an exhibition which will open Friday, May 8th.

The heart of the exhibition is the meeting point between the artists and their work and the gallery’s audience, who were invited to observe them at work, and even take part in their artistic process. Concurrently, the mechanism in which the exhibition operates was examined – a commercial gallery offering to represent artists under conditions it has set - a commitment to stay in the gallery for a whole week. Once a week, the artists and the curator met and read texts – each artist determined one text related to their work, and the curator selected one addressing the modes of creation and display. The shared reflection on the works, and the resulting discourse, concluded with the passing of the torch amongst the artists. They were given the option to leave behind an open-ended artwork and written instructions for the artists who followed next.

During the week, Ido assembled a furniture set from foam boards which divided the exhibition space. Visitors were invited to ask him why.

Gordon’s work varies between painting, sculpture, and installation. He pays equal attention to every aspect of his exhibitions, from the paintings to the bench from which they are viewed. His studio is his home and vice versa, and conversations are an integral part of his artistic process.

Gordon holds a BFA from the Bezalel Academy of Art and Design, Jerusalem. His work has been shown in solo exhibitions in Hamidrasha Gallery in Tel Aviv and Artists’ House in Jerusalem, as well as in various group exhibitions in venues such as the Tel Aviv Museum of Art, Helena Rubinstein Pavilion, and the Archive Box in Berlin. Gordon also collaborates on the podcast Things in the World with Arnon Ben Dror.

During the week, Noga documented the shadows of momentary sculptures and the movement of visitors by painting on the surface of the gallery.

Farchy is interested in sensory and sensual states, in the body, its testimony, its emptiness, and its abstraction. She is preoccupied with surfaces, with skin and its stripping, spreading, and flattening. Through these actions, she is seeking to immortalize the body.

Farchy holds a BFA from Bezalel Academy of Art and Design, Jerusalem. She won the Cooper Prize for Excellence in Creativity in 2017 and the Presser Prize for Excellence in Painting in 2018. Her work has been in solo and group exhibitions in venues such as Balcont Gallery in Tel Aviv, Barbur Gallery in Jerusalem, the Steinhardt Museum of Natural History in Tel Aviv, and the Alliance House in Jerusalem.

David transferred his studio and practice to the gallery’s exhibition space. During the week he painted and printed digital paintings and comics.

David Duvshani was born in Tel Aviv in 1991, and he lives and works in Tel Aviv.

Duvshani works with comics, painting, drawing, and print techniques. His works focuses on charged historical and political narratives and are characterized by humor and satire.

Duvshani holds an MFA degree from the Bezalel Academy of Art and Design, Jerusalem, and the  Ecole Nationale des Beaux-Arts de Paris. His works have been exhibited locally and internationally - in solo exhibitions in EnclaveProjects in London, Beaux Arts de Paris, and in an upcoming show at Alamcen Gallery in Jaffa. He has participated in group exhibitions in venues such as the Ein-Harod Mishkan Museum, the Nahum Gutman Museum in Tel Aviv, Hanina Gallery in Tel Aviv, WhiteNight in Paris, and the Griffin Gallery in London. Duvshani publishes a weekly comic column, Hishuvei Kitzin, in Haaretz newspaper, in collaboration with Julia Fermentto, and is a regular contributor to Tohu magazine. His book Crusades was published in 2019 and launched at an event at the Palais-de-Tokyo, Paris.

Yoav, Dana, and baby Nur embarked on a week-long journey from their Jerusalem studio to the gallery in Tel Aviv. The joint action of carrying their belongings connected them to the imagery of the two biblical spies, which depicts the pair carrying on their shoulders a hefty cluster of grapes from the Land of Canaan. During the week Dana and Yoav worked on dismantling and abstracting this image in a sculptural installation.

Their joint work deals with definitions of private, spousal, and gender contexts by using sculptural objects and in-depth research of materiality as an extension of the physical and expressive body. Their enigmatic objects are characterized by constructive, formal, and narrative reduction, existing as independent entities in space while at the same time penetrating and disrupting it.

Fisch and Tannhauser graduated from the Bezalel Academy of Art and Design, Jerusalem, with a BFA degree,– Fisch from the Art Department and Tannhauser from the Ceramics and Glass Design Department. Tannhauser’s work has been shown in group exhibitions in venues such as Binyamin Gallery in Tel Aviv, DOX Centre for Contemporary Art in Prague, and Beit Hansen, Jerusalem. Fisch’s works were included in solo and group exhibitions in venues such as the New Teddy Gallery, Jerusalem, Koresh Gallery, Jerusalem, and Binyamin Gallery in Tel Aviv.

Since graduating, the two have been sharing a studio at Art Cube Artist Studios. In the last year, they created and presented a joint body of work that examines and challenges the personal boundaries of a creative duo.

During the week, Maya occupied the online space of a new webpage which functioned as an artist book and transformed into an experimental virtual installation. The link was shared on the first day of Maya's takeover, and as the week progressed it was continuously updated with various elements, such as drawings and questionnaires that allowed communication with the artist as she self-isolated in her home. The website will cease updating only when the artist and her surrounding are allowed out of quarantine.

Maya Perry was born in 1994 in New York City. She lives and works in Tel Aviv.

She works with drawing, experimental animation, and installation techniques. Her work revolves around the psychology of trauma by emphasizing how moments of intimacy and vulnerability intersect with memories of violence and manipulation.

Perry holds a BFA degree from Minshar School of Art, Tel Aviv, and has also studied painting and drawing at Avni Institute of Fine Art, Tel Aviv. She exhibited in a solo and duo exhibition at the  Alfred and the Maya Galleris, and her works were in group exhibitions in venues such as the Steinhardt Museum of Natural History in Tel Aviv, the Tribeca Art Center, New York, and the Refrigerator in Tel Aviv. Perry is the recipient of the 2019 Zoom Prize for a young Israeli artist. 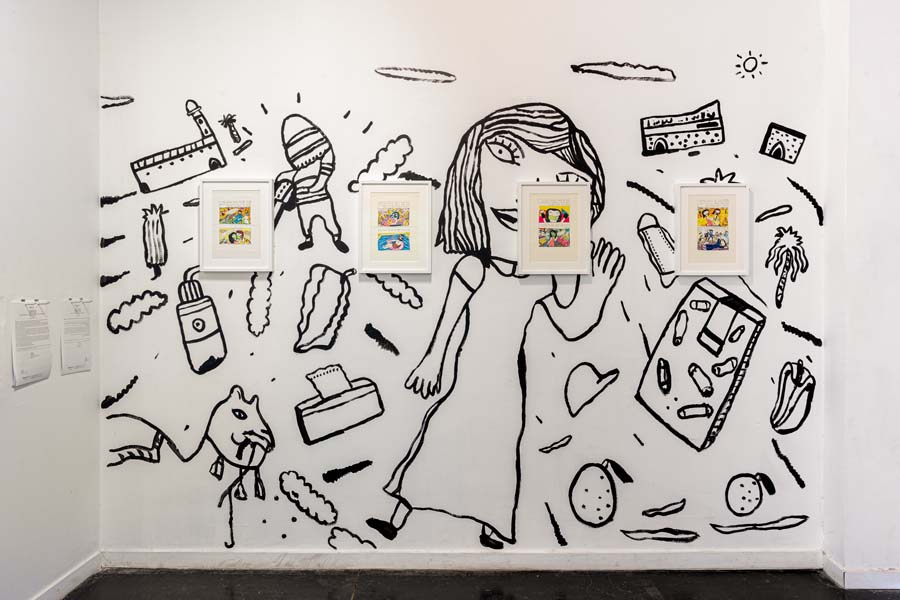 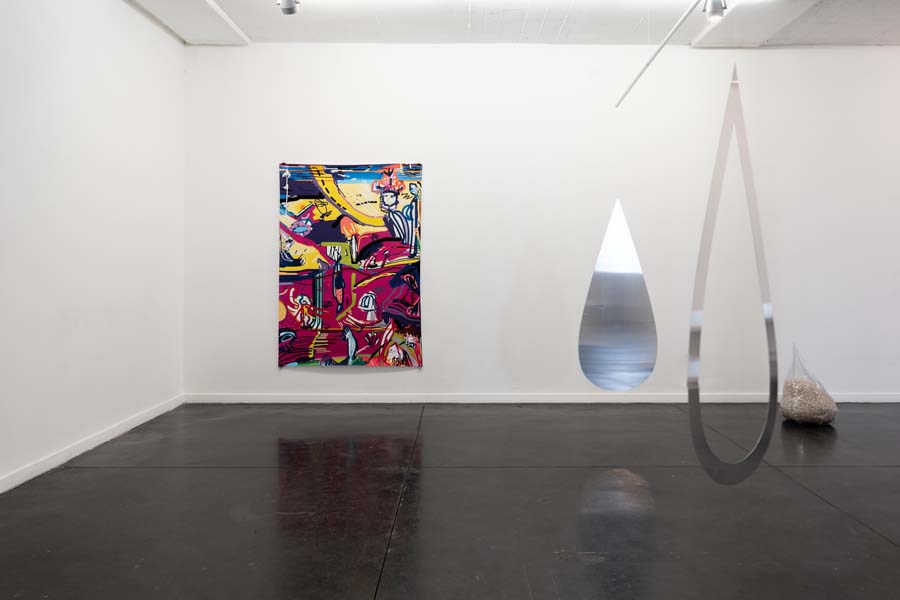 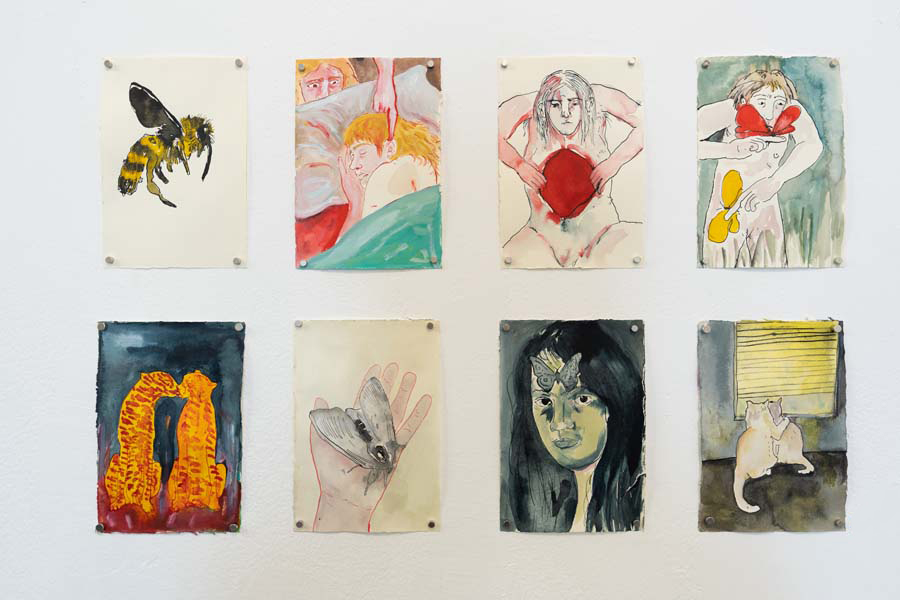 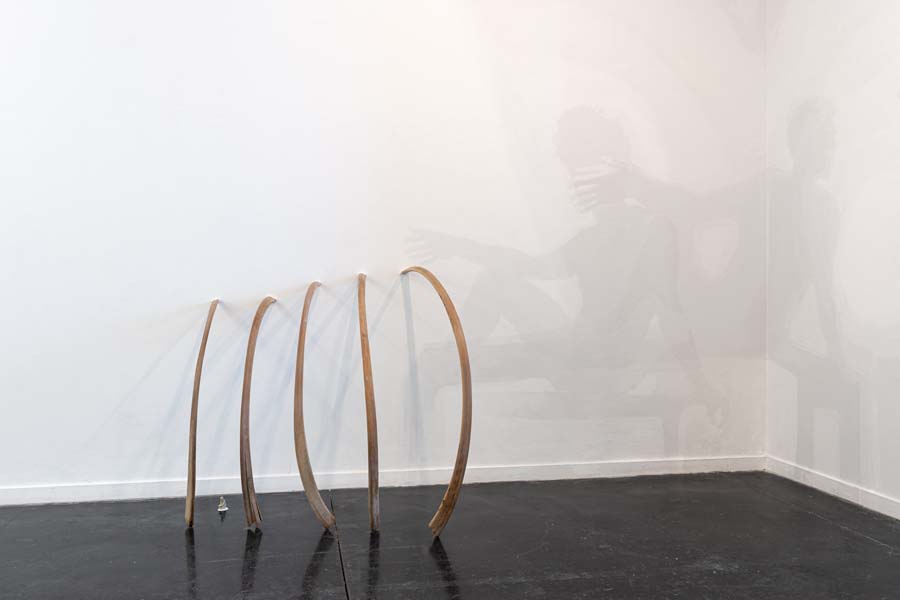 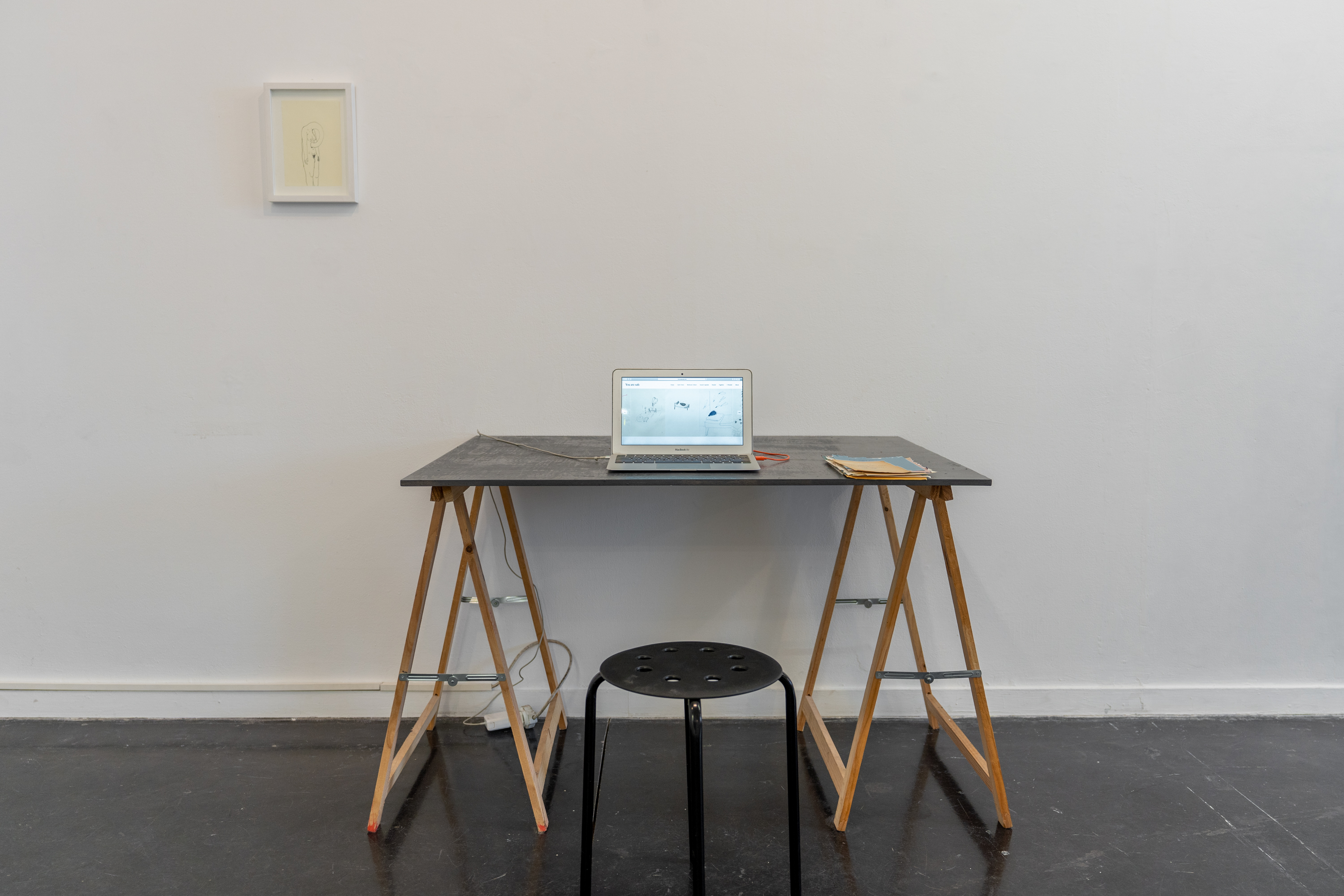 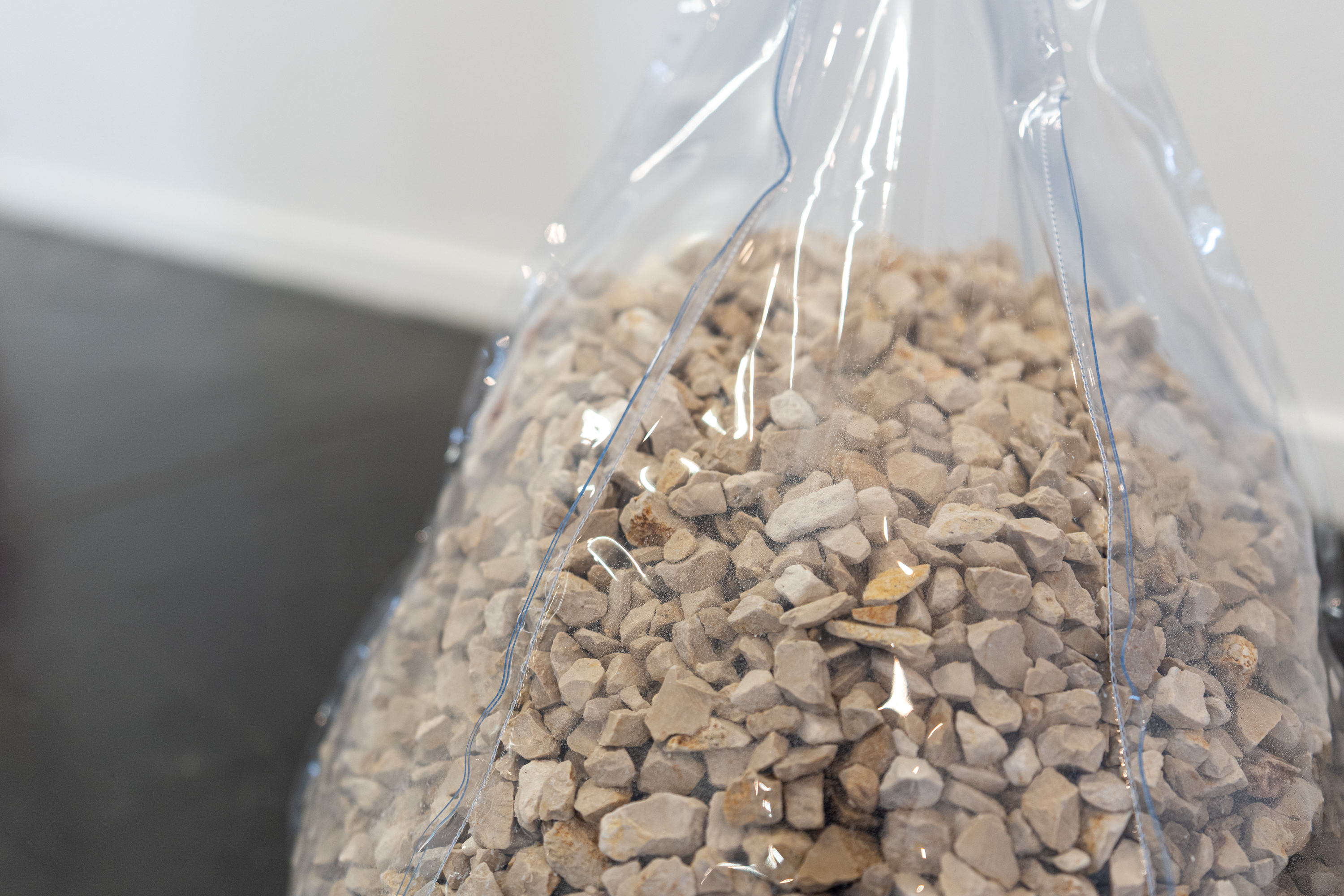 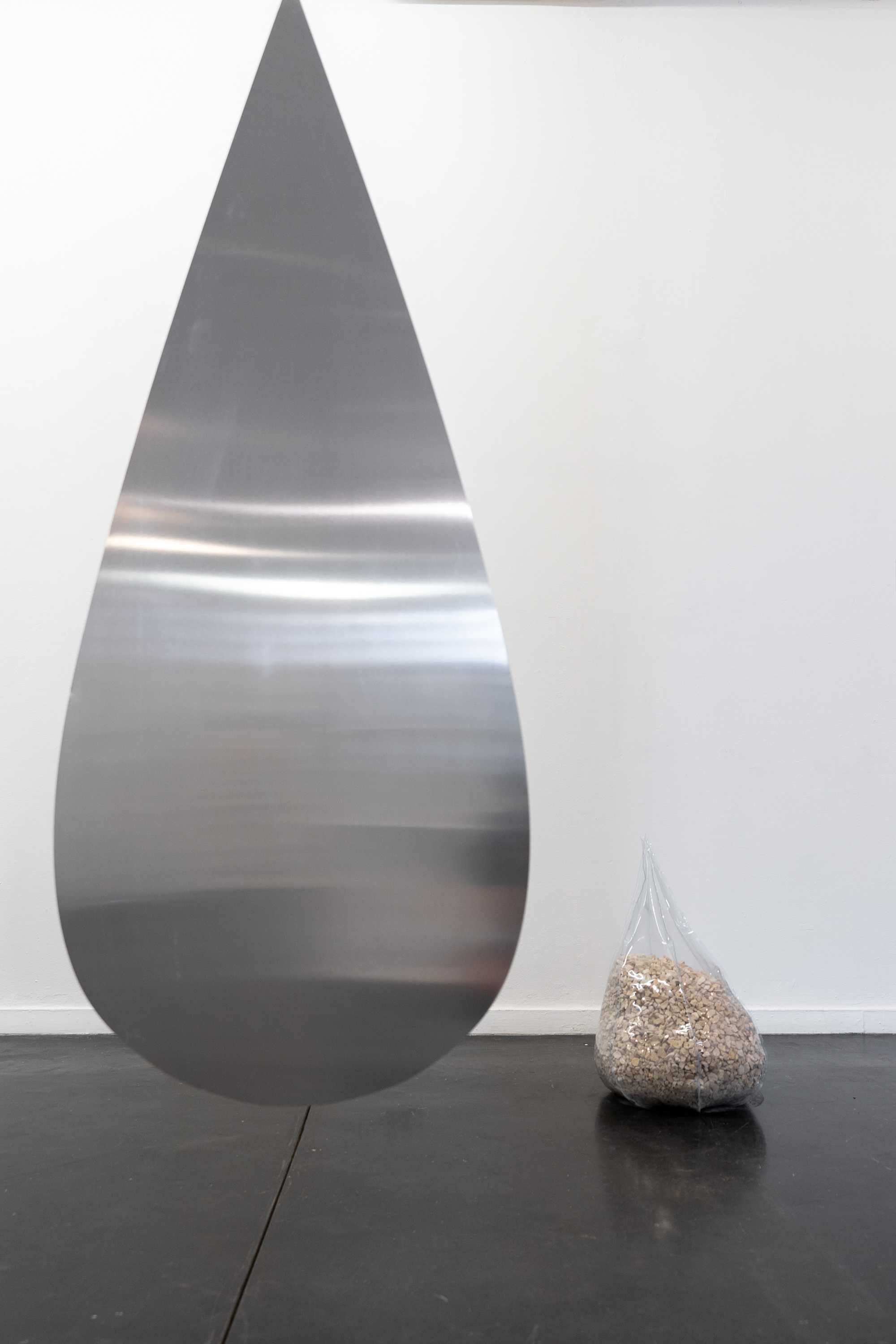 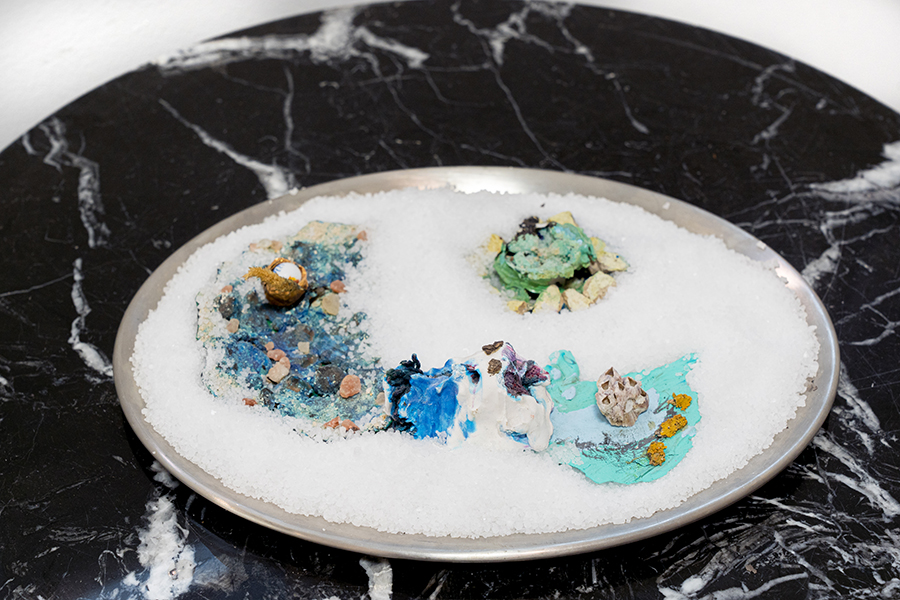 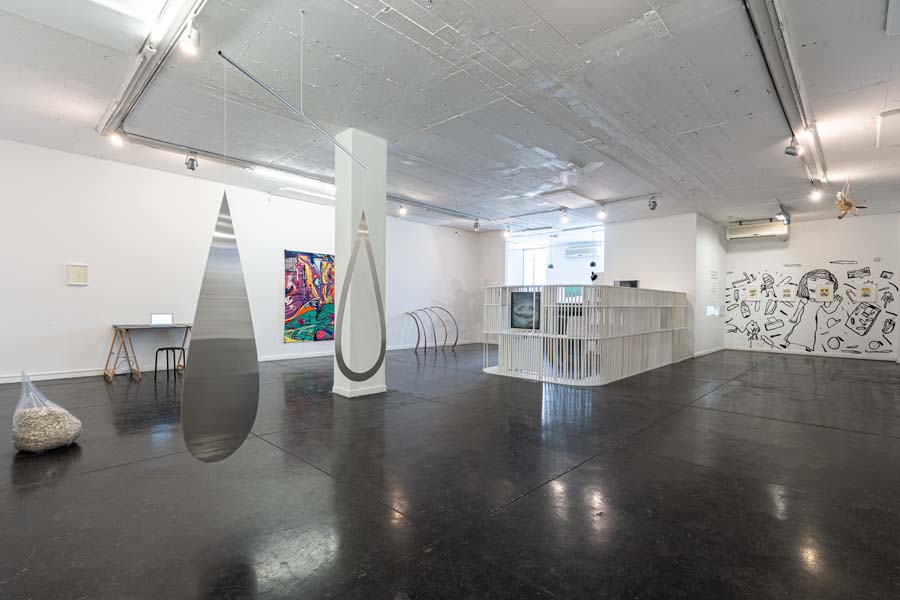 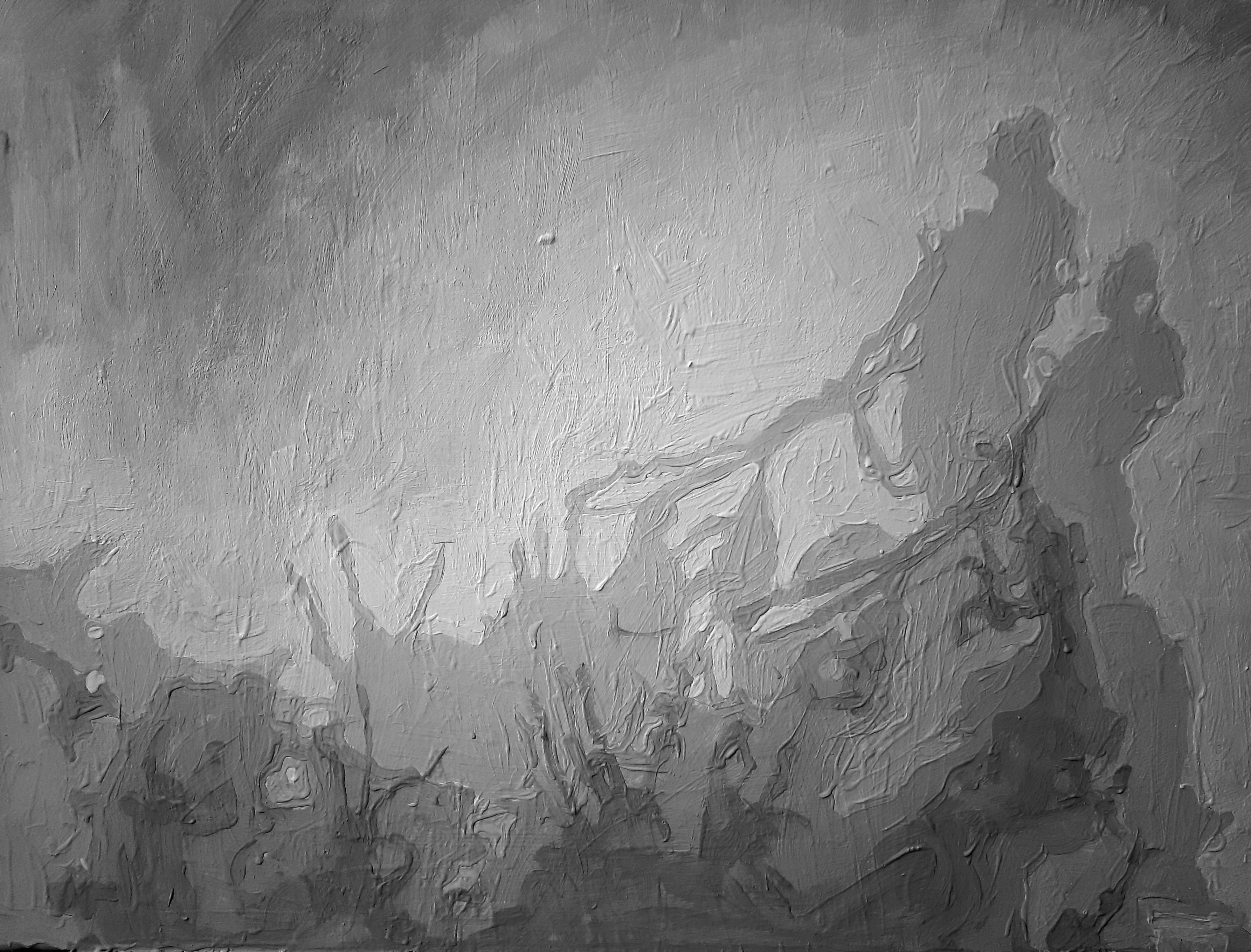 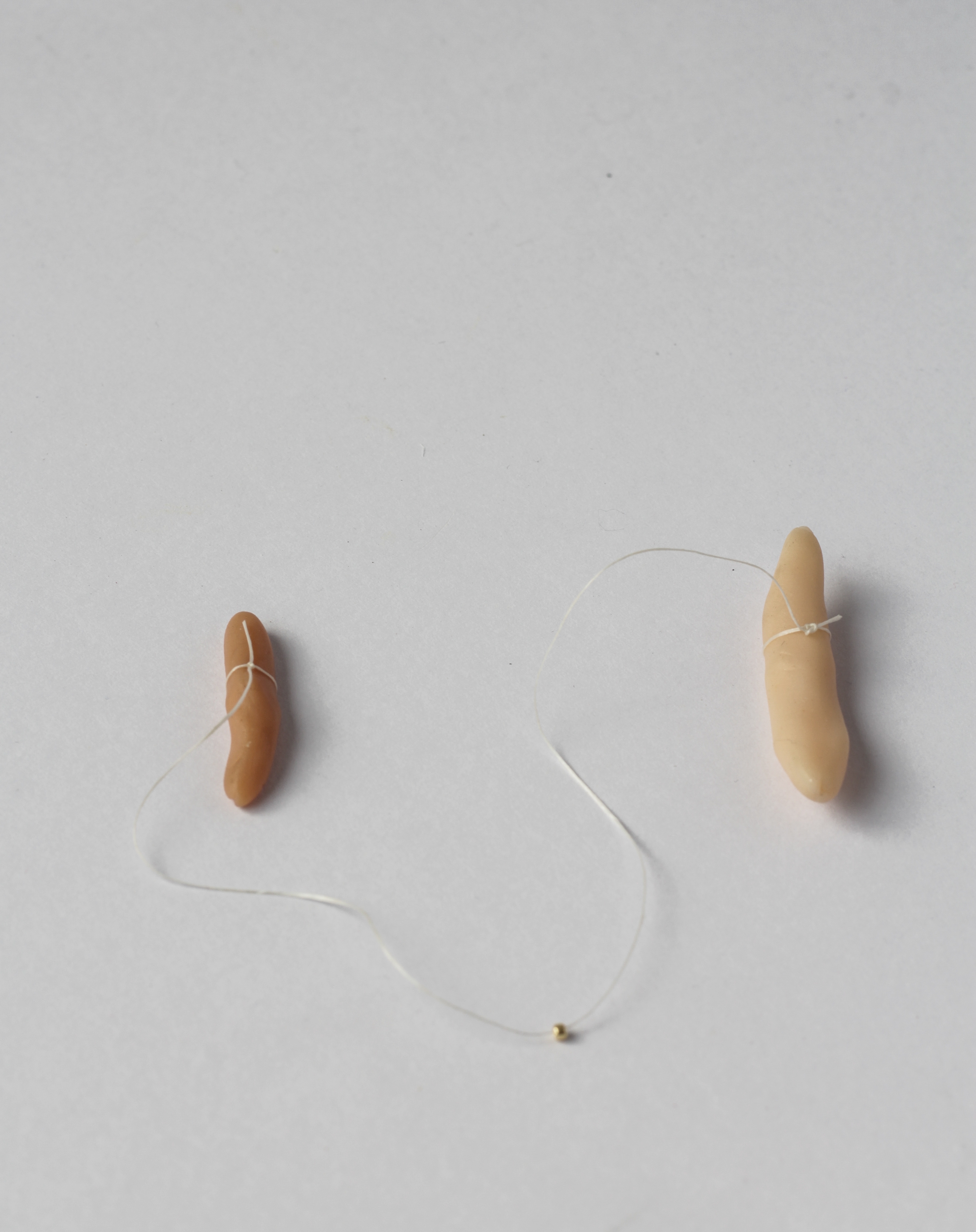 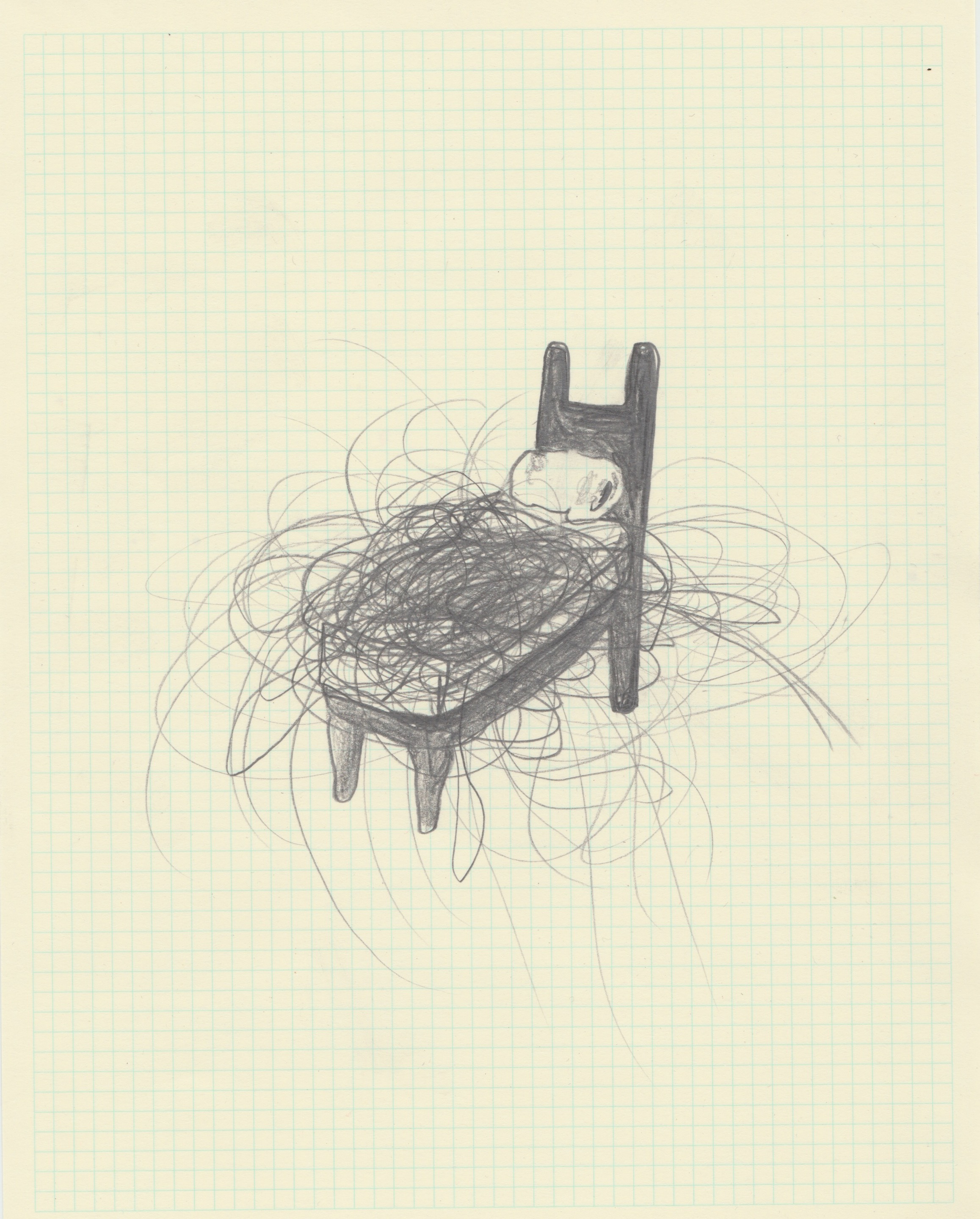 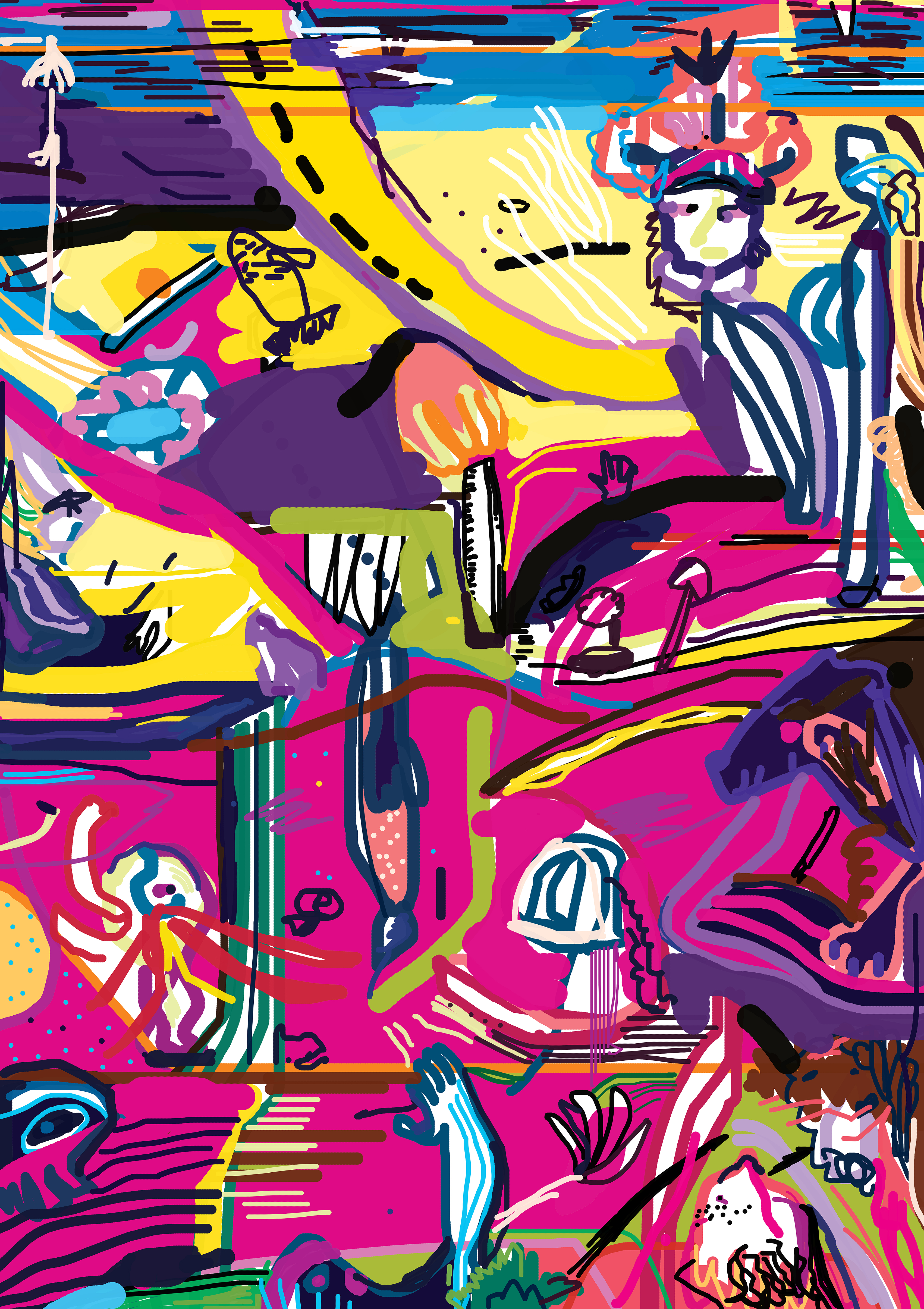