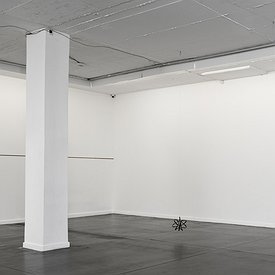 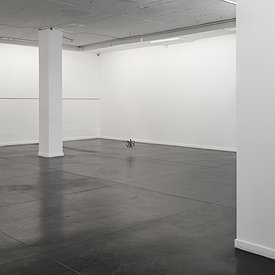 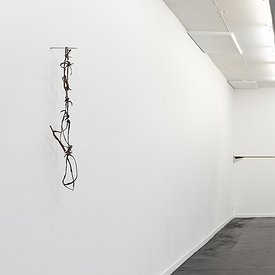 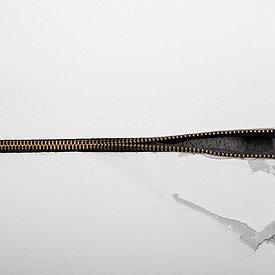 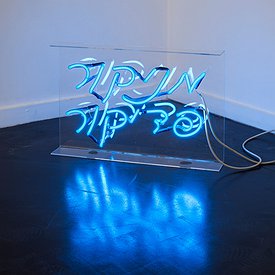 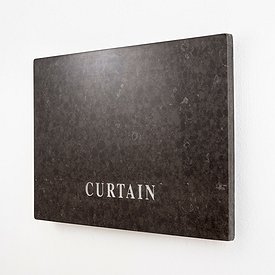 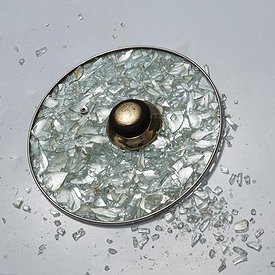 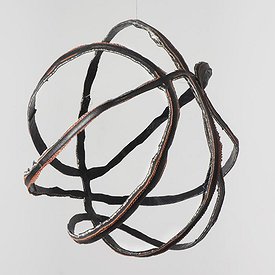 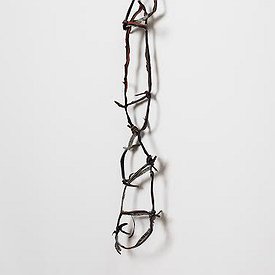 Yaara Zach manipulates everyday readymade objects. Her work shifts the object from its original context and broadens its meanings, functional purposes and associations.

If we consider the structural aspect of the works, we might say that Zach departs from a formalistic standpoint that studies different arrangements of substances and forms (contrasts and combinations of colour, of soft and hard materials, of geometric and amorphous shapes, of whole and fractured structures). And indeed, as much as the works in the exhibition are object based- a zipper, a neon sign, a basketball, a pot cover- one can also see them as abstract forms- a line, a rectangle, a circle, a triangle and a curved line. With that said, Zach does not leave the shapes in their ideal form. Her interest is rather in their breaking point, their disintegration. Her genre of formalism is full of vitality, it may deconstruct the object, isolate it from its natural surrounding and refine it to its fundamentals, but the approach is far from clinical or analytical. She creates within a subdivision of formalism that merges pure ideals with human flaws.

Conceivably her works may be observed as a series of failed attempts to define boundaries. The devices are all designed to close and confine spaces or objects- the zipper fastens, the wall blocks, the curtain conceals, the pot cover seals, the ribs of the basketball define its shape and size, the shop sign classifies the service at hand. Their presentation in the show places each of these objects in an intermediate position- between the open and the closed, between the broken and the whole. These are borders in a state of anxiety attack, in an existential struggle to define boundaries between the world and themselves.

Zach creates a discourse of semiotic interpretation on the everyday object that confirms the immense influence context and subjectivity have on denotation. The difference between what the viewer knows about a certain object and what he sees in the exhibition, gives it new meanings.

For example, when encountered with the word "Curtain" engraved on a marble plaque, the viewer envisions the cold and stiff material before him turning into a soft flowing fabric, an object that has potential motion, that can be diverted, moved about. The 'Manicure- Pedicure' sign is expropriated from its informative and commercial purpose, giving its text an aesthetic interpretation. The two rhyming words become a linguistic circular Haiku, a formalistic play on words. It may be said that the same circular Haiku takes place in the basketball turned into a net, in the shattered glass that preserves the pot cover's round shape, and in the imagined potential of opening and closing the curtain and the zipper.

Hence the exhibition has a recurring theme of an imagined performative act- the viewer is asked to mentally complete the exploit suggested by the work. His eye connects the shattered glass on the floor and turns it back into pot covers, it reassembles the basketball, it opens the zipper, tears down the wall, it diverts the curtain and steps into an imaginary backstage world. 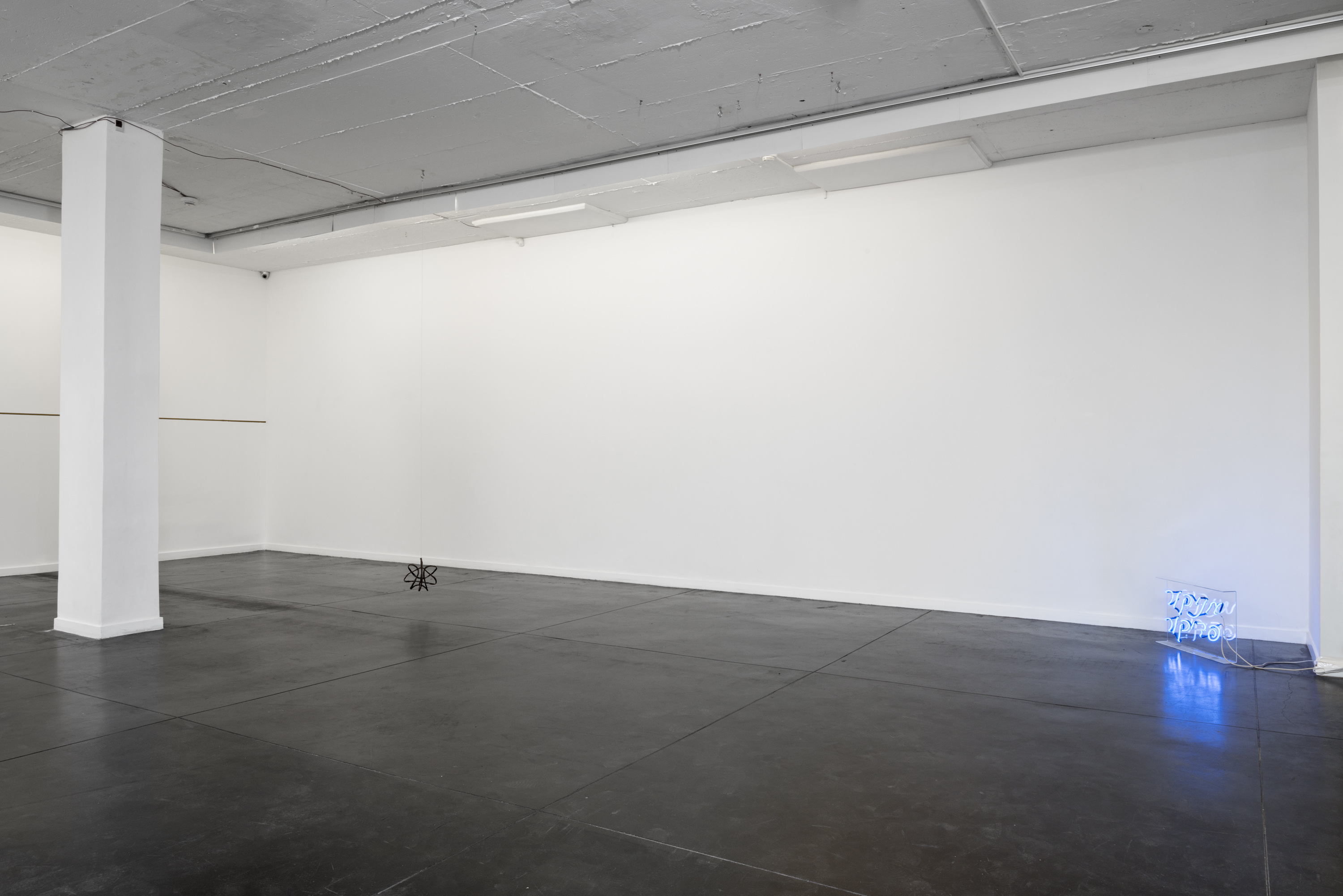 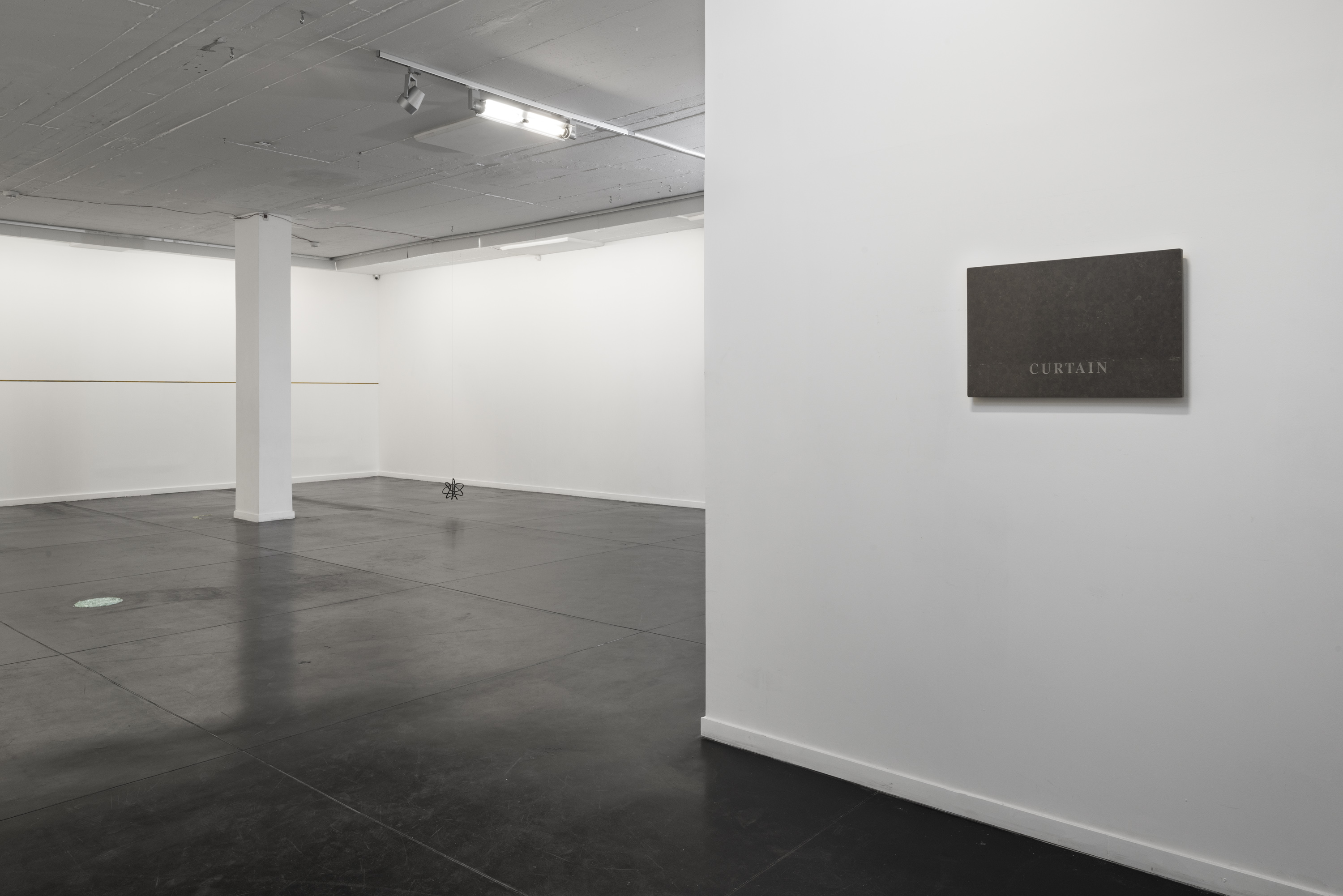 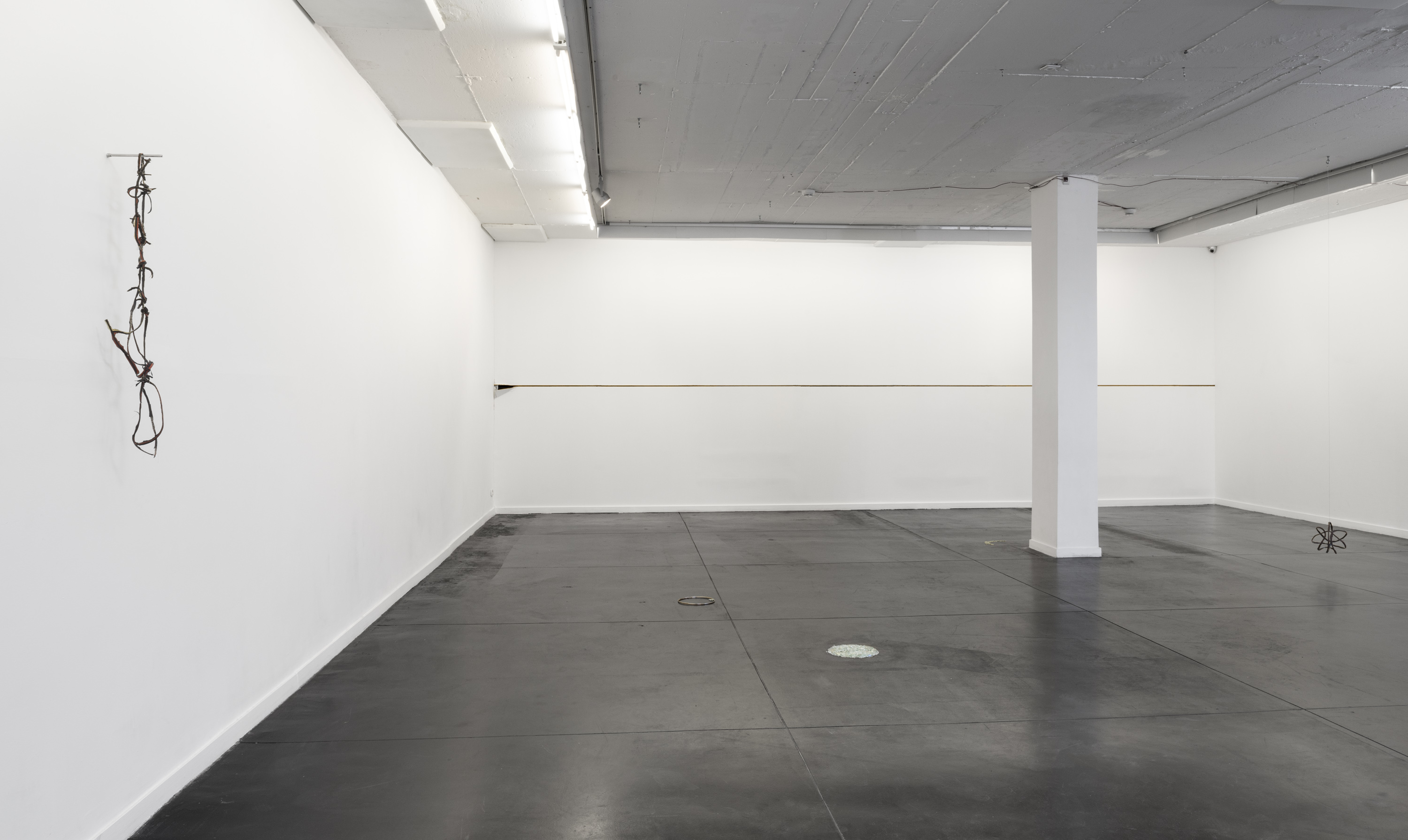 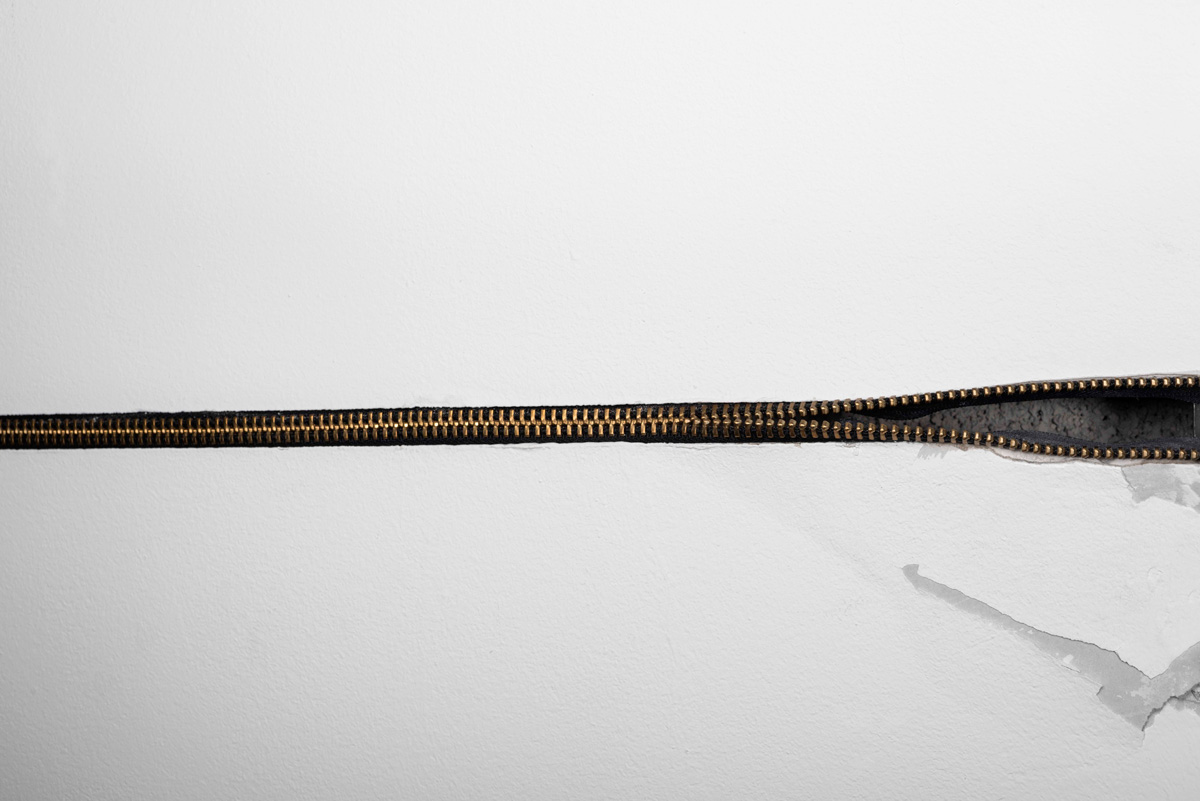 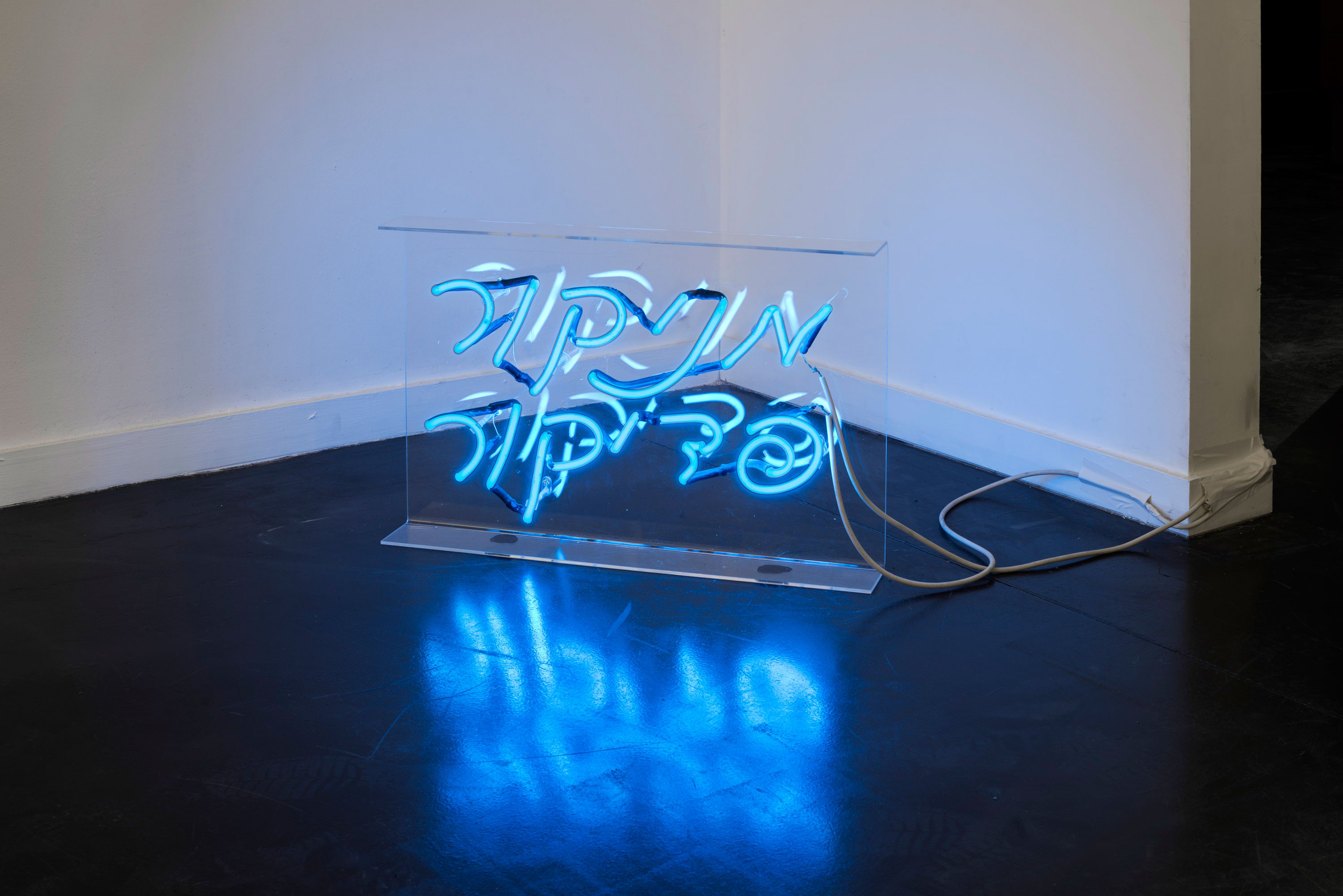 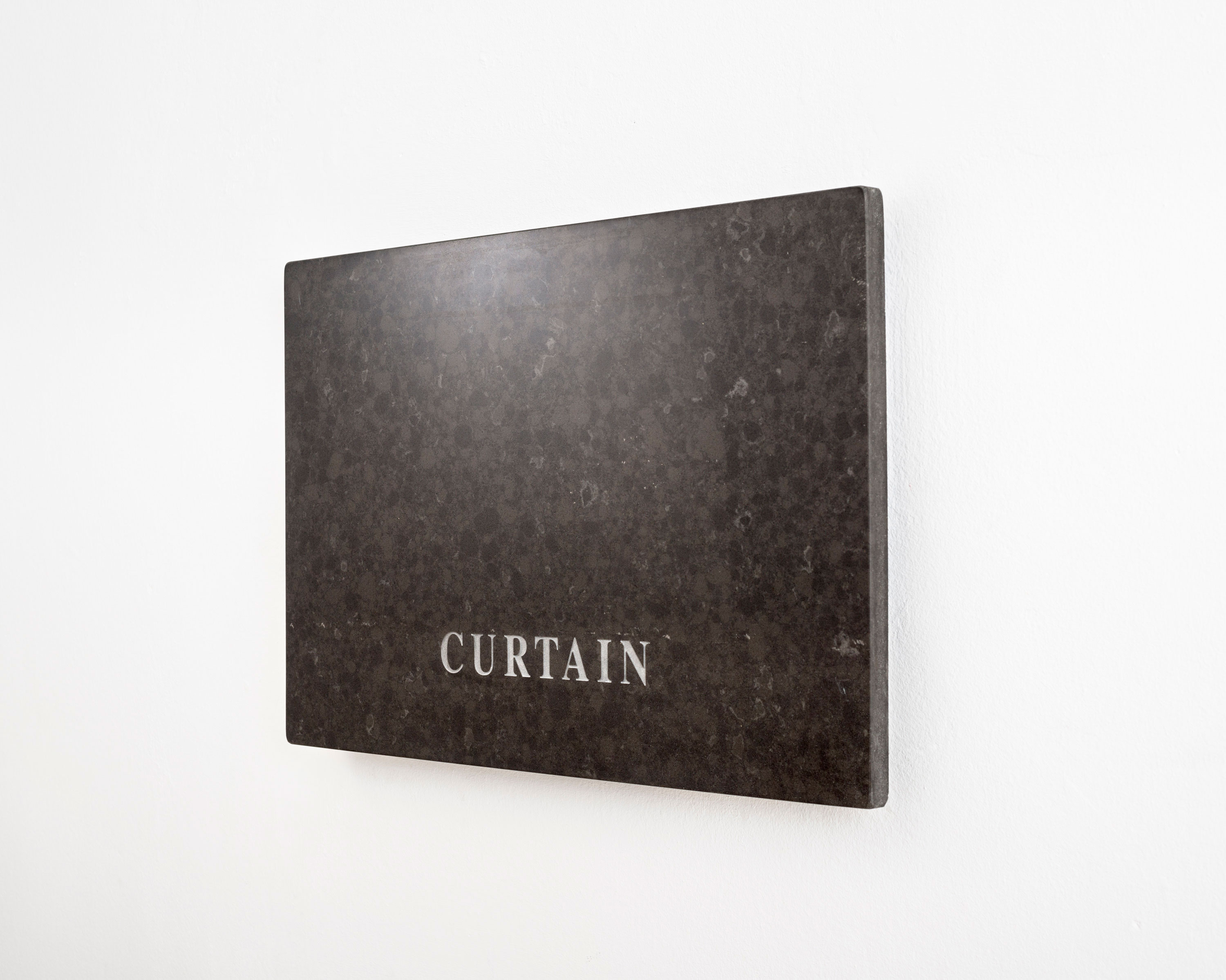 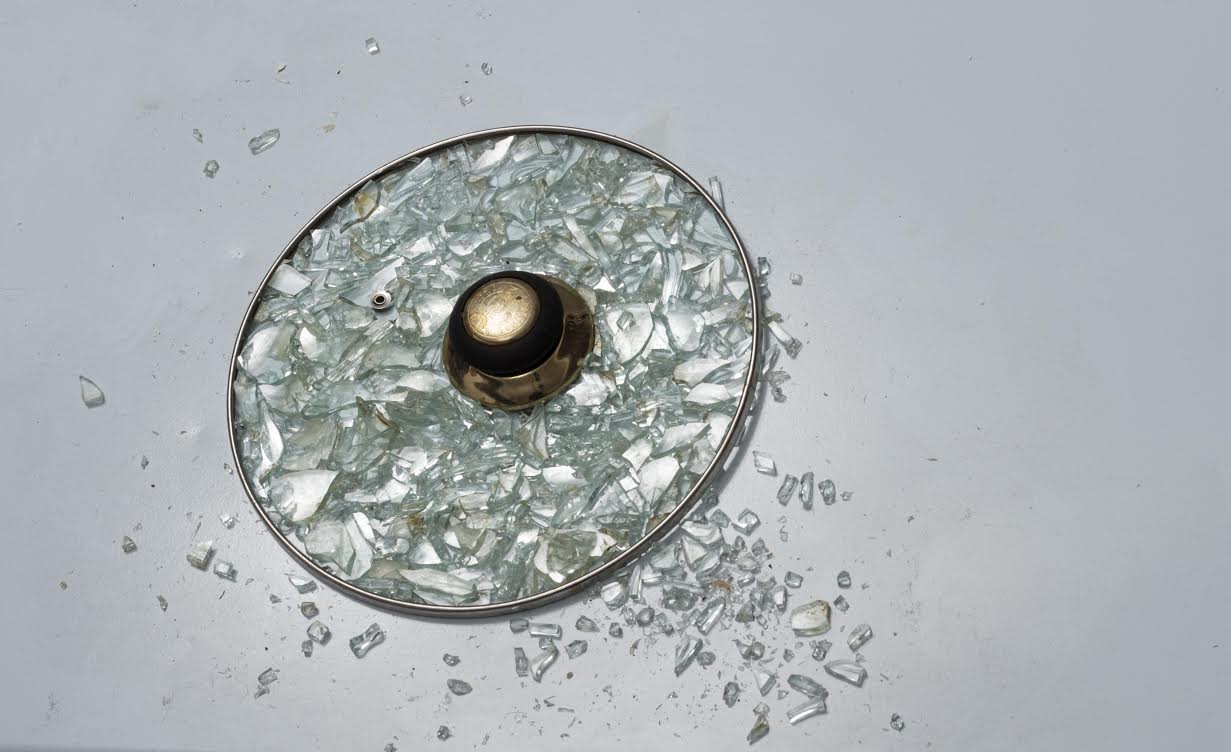 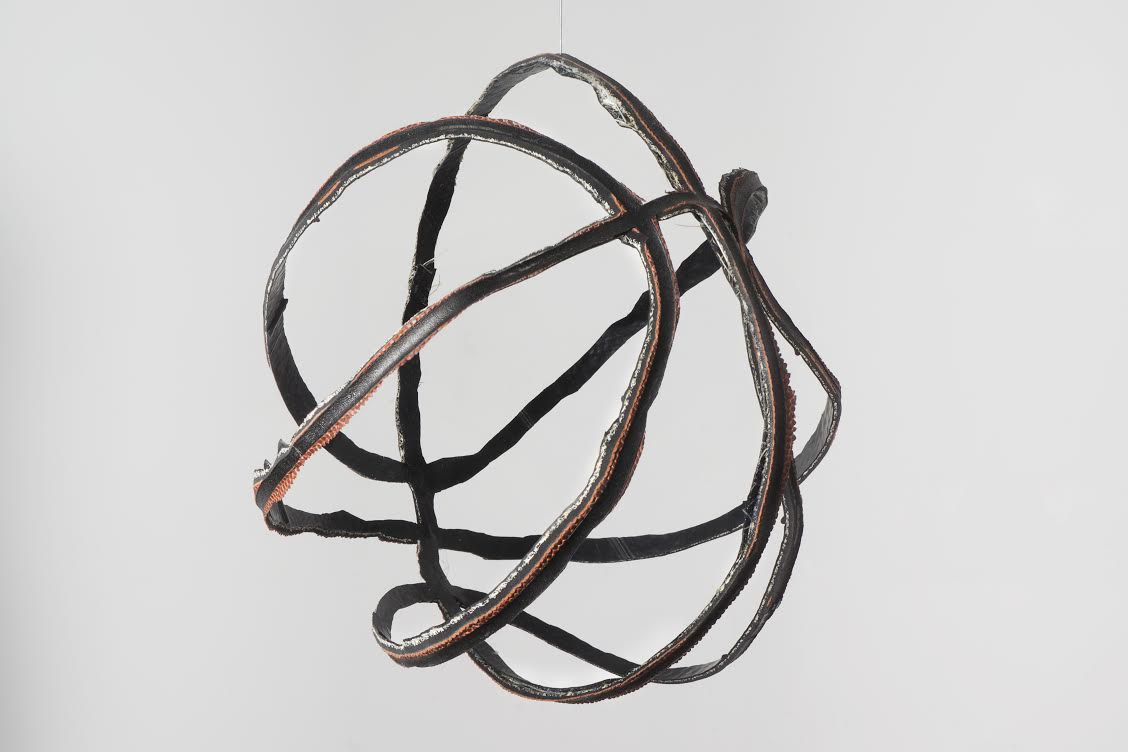 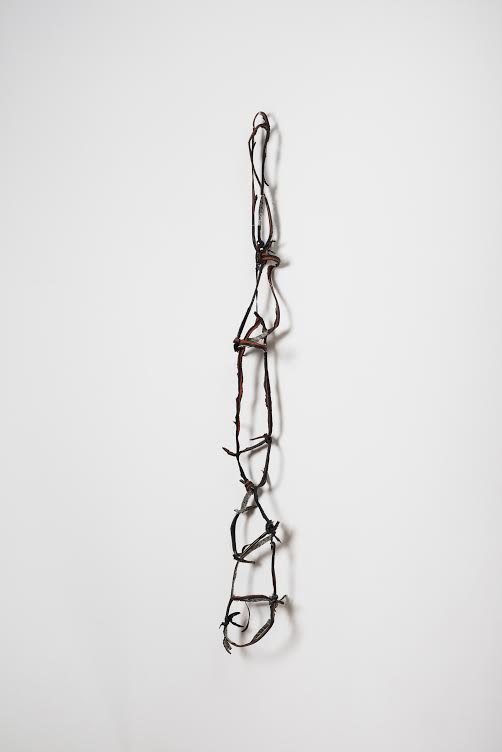