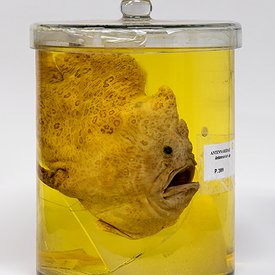 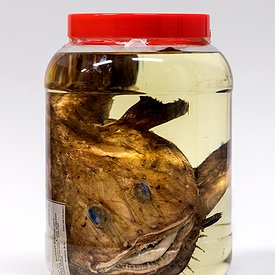 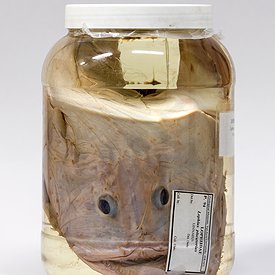 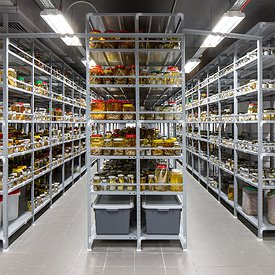 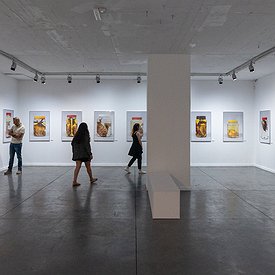 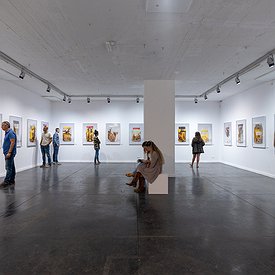 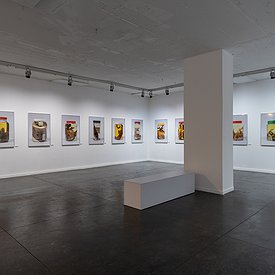 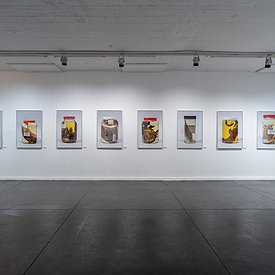 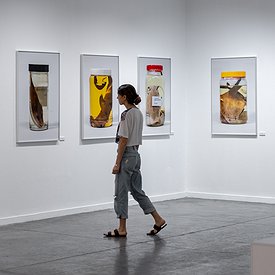 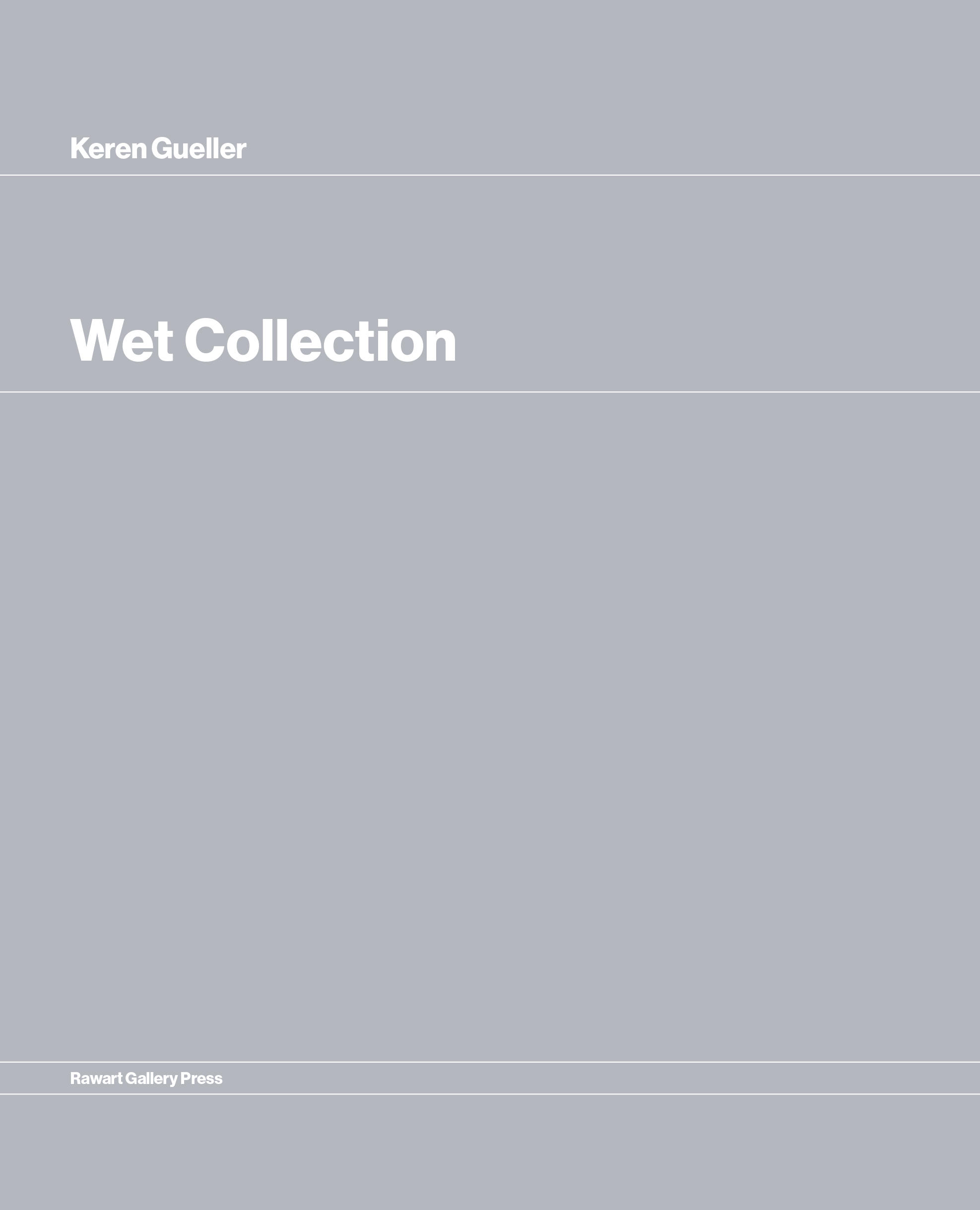 The "Wet Collection" series was photographed inside the department of fish in the national natural history collection at the Steinhardt Museum of Nature, Tel Aviv University. The marine and aquatic collection houses over 800,000 fish samples from Israel and abroad. The fish collection is an archive that allows tracking changes and deepening the research of the factors of change for the purposes of protecting the marine environment.

After an extended period of bureaucratic procedures vis-a-vis the gatekeepers of the archive, artist Keren Gueller was finally given permission to disturb the peace of the dead fish. In a cold room, lit by constant and stable fluorescent lighting, thousands of aquariums are arranged on a metal shelving system. The aquariums - glass jars, some of which have once been used for food storage - are filled with clear preservative liquid. The dead fish are compressed vertically in each jar, with a label containing details of the fish’s species. Most of the collection’s data have been digitized, but the physical bodies themselves are still preserved using the same techniques of the first ichthyologists.

The photographed library of fish is reminiscent of the library of one of the greatest fish researchers of the 20th century (and also a notorious supporter of racial purity), David Starr Jordan. Jordan used to go on research expeditions in bodies of water around the world. He would place the unidentified fish bodies he had collected in ethanol jars and attach a name tag to them. One morning, in 1906, an earthquake flung all the jars onto the floor, shattering the glass and separating the fish from their respective labels. Chaos! "His thousands meticulously named fish had transformed back into a heaping mass of the unknown," according to Lulu Miller who wrote the book Why Fish Don't Exist. Fish, as it came to be understood in the 1980s, are not a taxonomic category; they did not evolve from the same evolutionary source. They are grouped together only because to a person sorting groups of animals, they appear to be their own group.  Jordan, who had never given up trying to bring order to a chaotic world, reattached every name he remembered to each fish, stitching it directly on the fish's skin with needle and thread.

The large-scale photographs of the archive, replicating a meta-view from the outside - the "big picture" of human knowledge organizational structures - are pushed far back to the gallery's office. Behind the scenes.

On the space's walls, Gueller offers a different encounter with the archive and the fish - no longer the view of Man at the top of the hierarchy. The artist removed jars of fish from the shelves in order to photograph them in a professional setting that simulates a staged studio portrait. All are shown in close range, magnified in relation to the dimensions of the human body. A glimpse into eyes that could never meet our gaze through the three layers of glass separating us: the jar glass that preserves their bodies; the glass of the camera lens that has captured the material memory of the preserved life; and the frame's glass. A fish cemetery.

"Monsters," as they are called by psychoanalyst Dr. Daniel Milman, in a text he has written for the exhibition catalog, in which he suggests that those monsters resemble the human condition of us all. The photographed subjects are different from the other animals in the public areas of the museum: they have been deformed and their seductive colors have been lost in the process of preservation. All that is left is a description next to the photograph: "Pink with green dots." The chasm that opens up between the photographic image and the word is reminiscent of Gueller's pairing of mental disorders definitions and videos of physical gestures by animals for her exhibition "Florence Syndrome."

Through the exchange of glances between the one cataloging and distancing and that which invites closeness, disgust, and compassion, the artist addresses questions related to our contemporary relationship with the inhuman, as shaped by the camera: who is watching whom and who can look back? Can the camera, which since its invention has been used as a means of human control over nature, offer a different encounter, intervene in the balance of power and change the fate of those photographed? And how does the view of what is marked as inhuman shape our view of ourselves?

The exhibition "Wet Collection" is accompanied by a catalog designed by Tomer Rosenthal with an article by Dr. Daniel Milman. The catalog will be launched in a gallery talk at the exhibition on July 2, 2022 at 12:00.

Gueller works mainly in video, sculpture, and installation. Her works study human behavior and environment. The works deal with autobiographical content, simple rituals and daily activities, and, through the tension between the documentary and the staged, they explore, dismantle, and reassemble social structures and rituals.

Gueller has won several grants and awards for excellence in art, such as the Osnat Mozes Award for Excellence, a Young Artist Award from the Ministry of Culture and Sports, the Sharett Foundation's Art Excellence Award for Encouraging Creativity by the America-Israel Cultural Foundation, and grants from the Council The Lottery for Culture and the Arts, from the New Film and Television Foundation, and from the Independent Creators Foundation of the Ministry of Culture. Gueller is currently participating in the Pais artists incubator at the University Gallery, Tel Aviv University.

The exhibition is held with the kind support of:

The Steinhardt Museum of Natural History 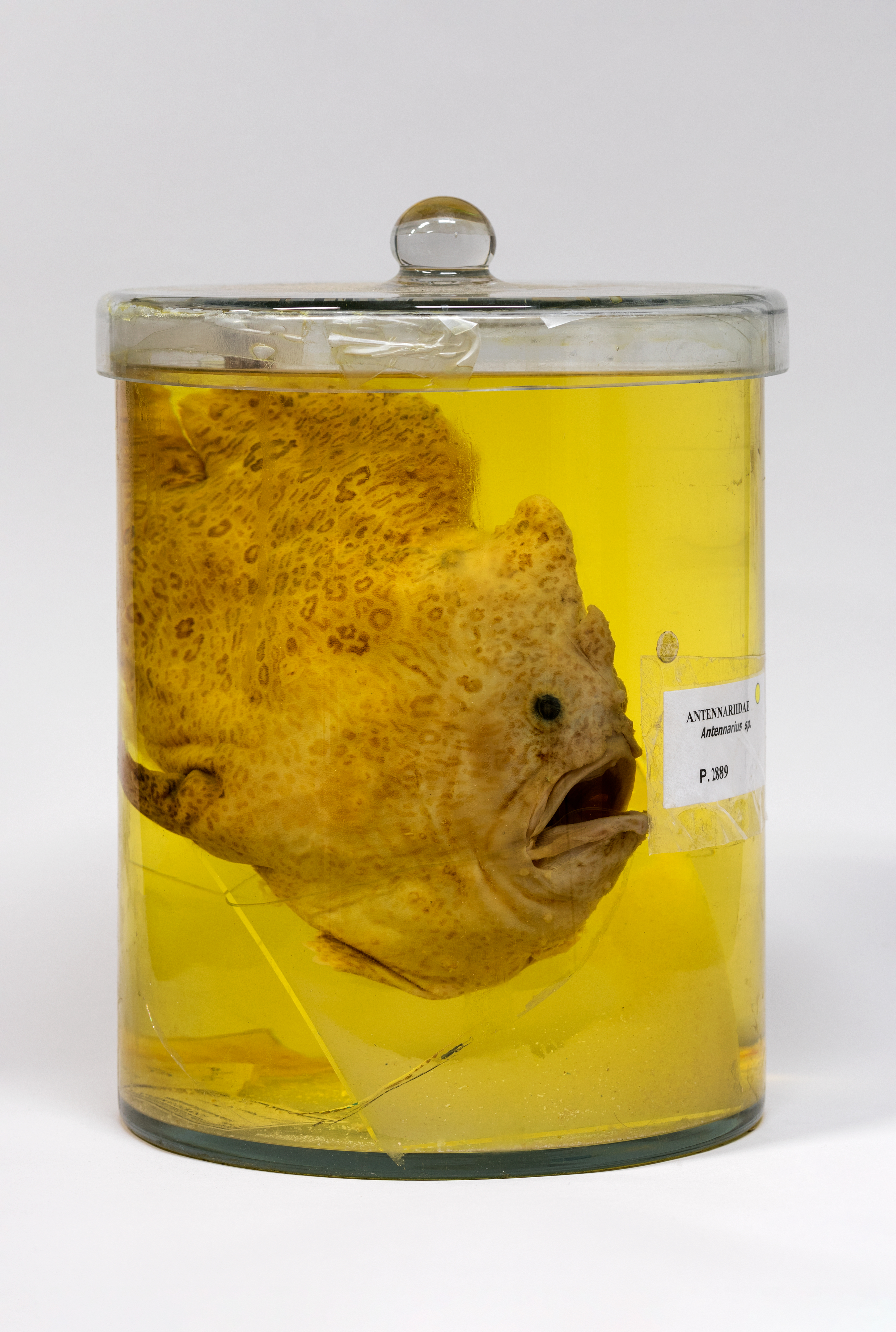 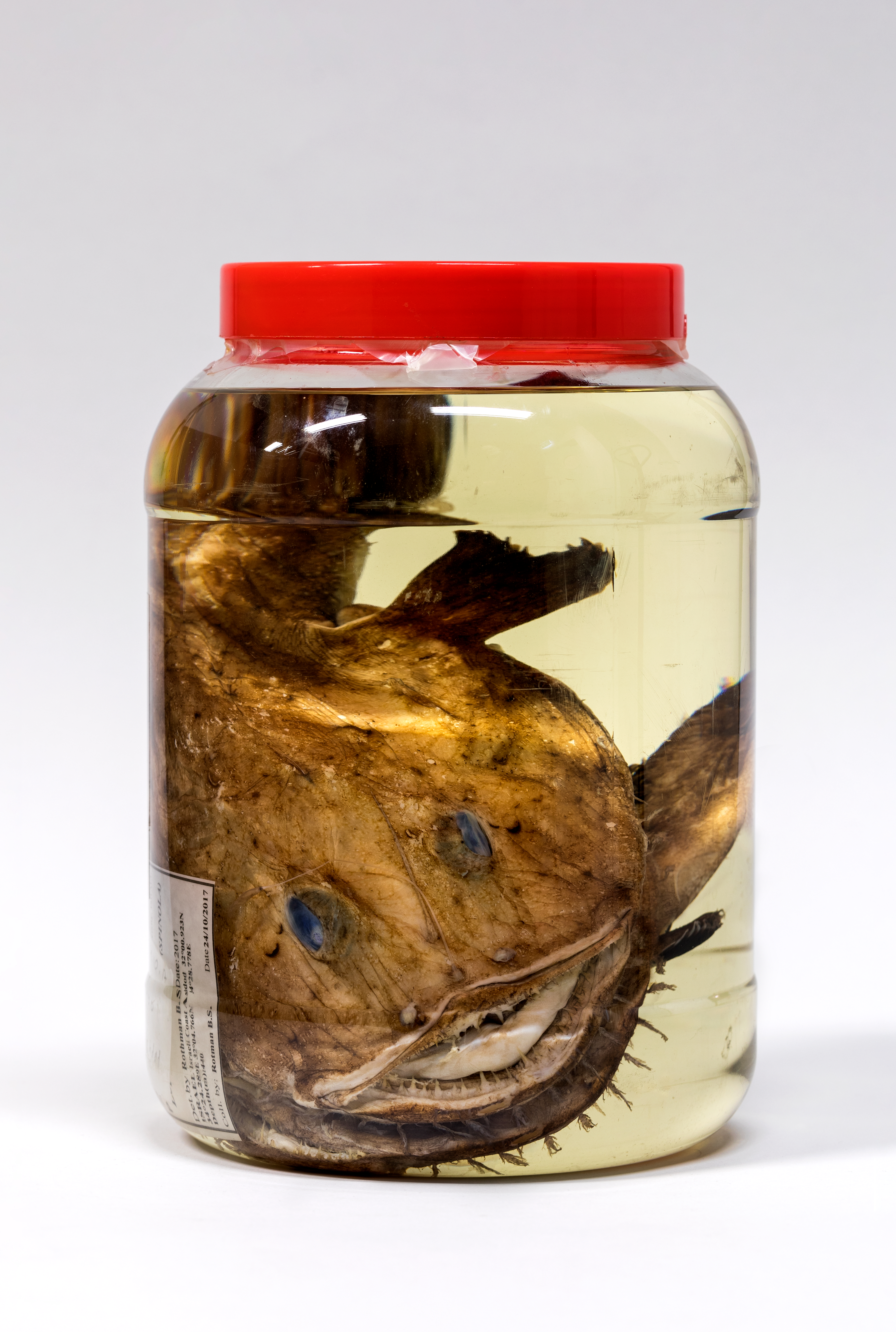 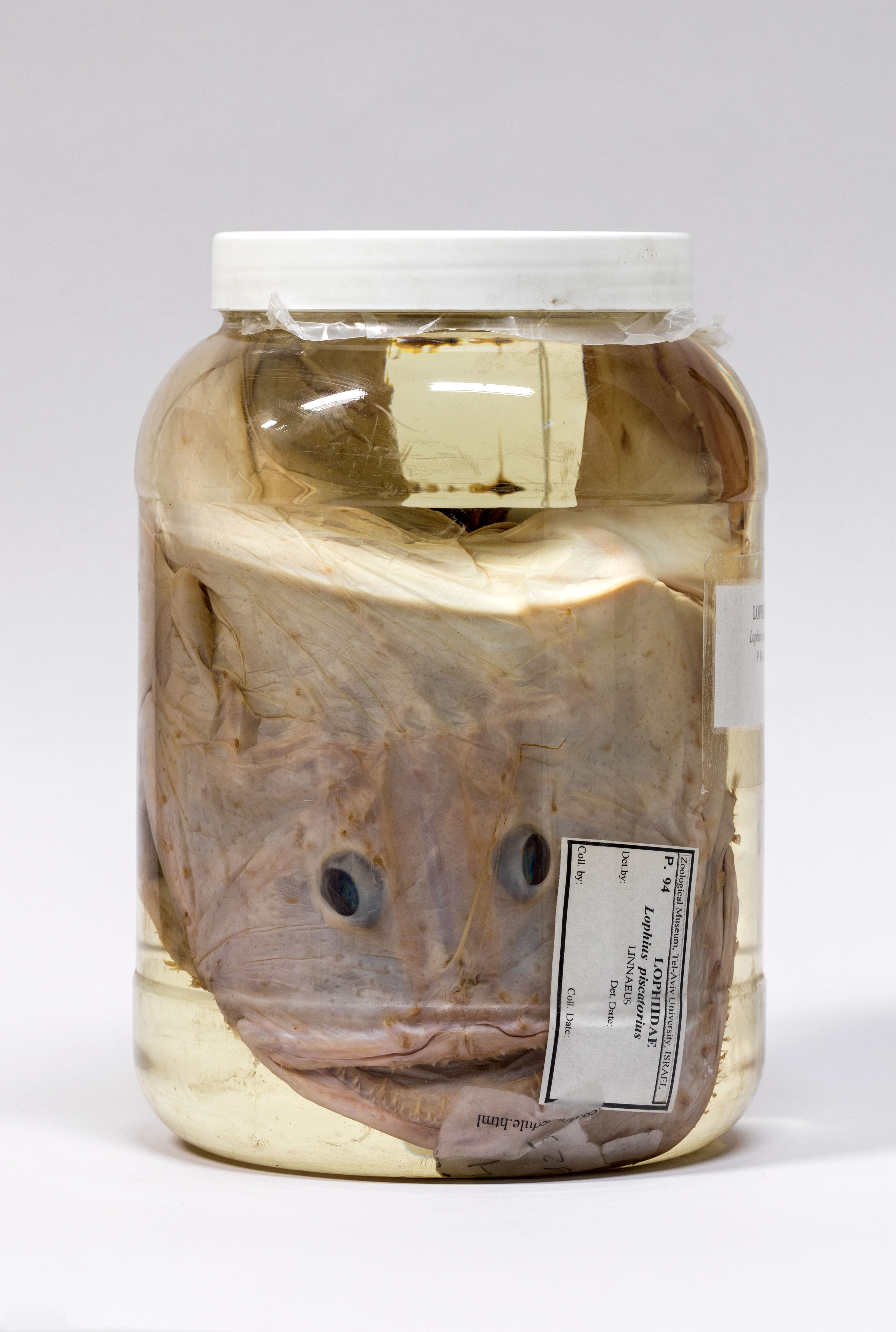 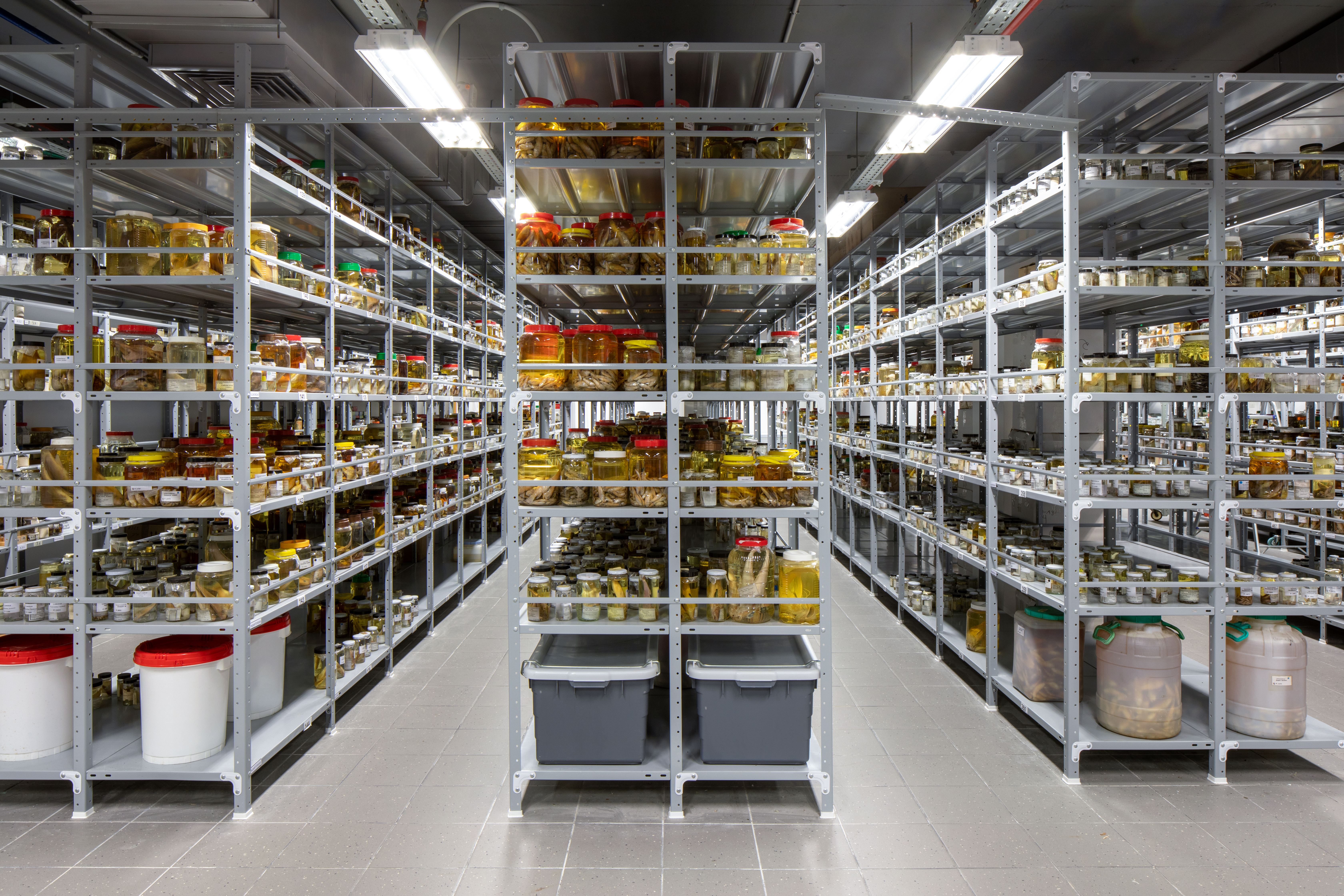 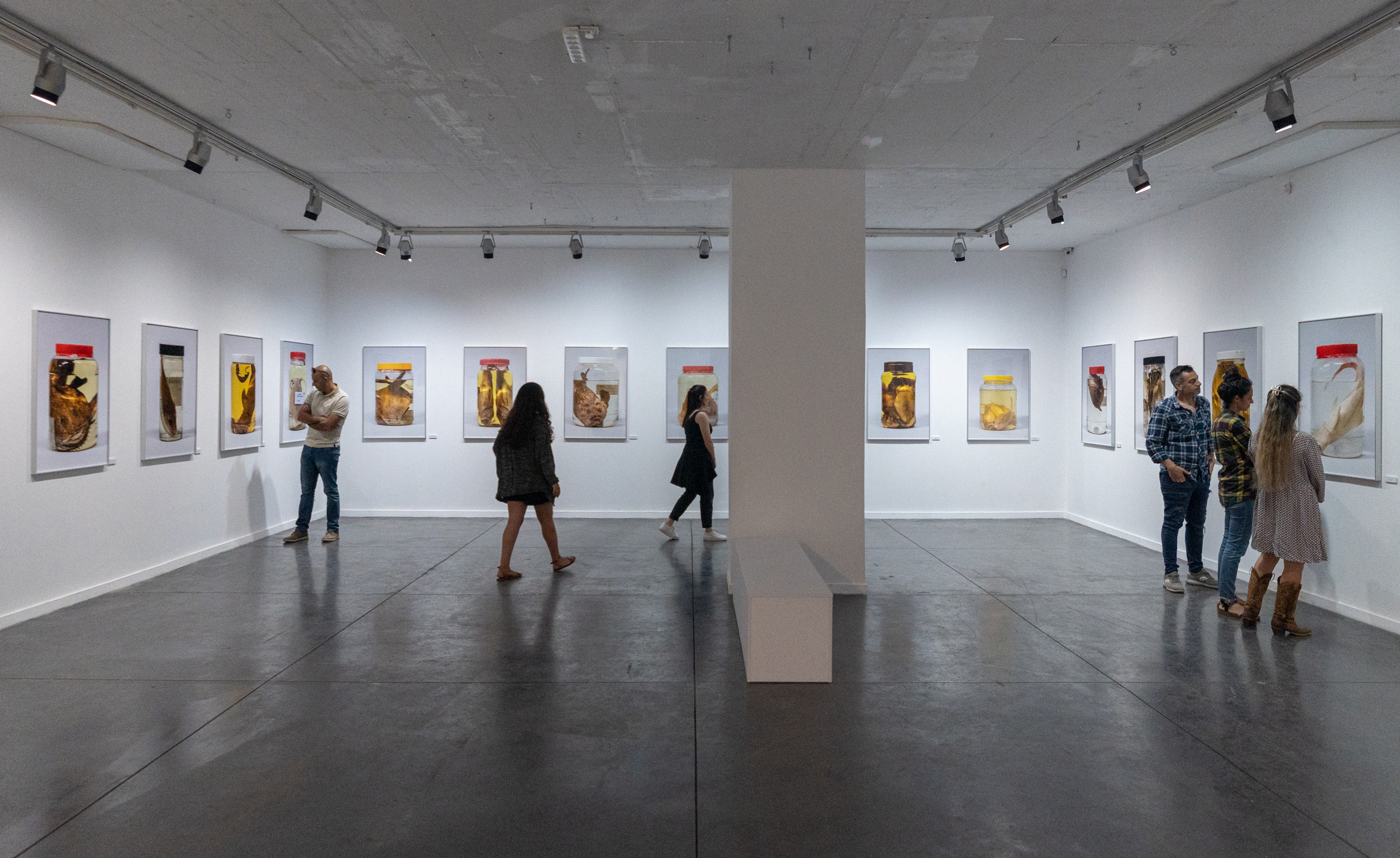 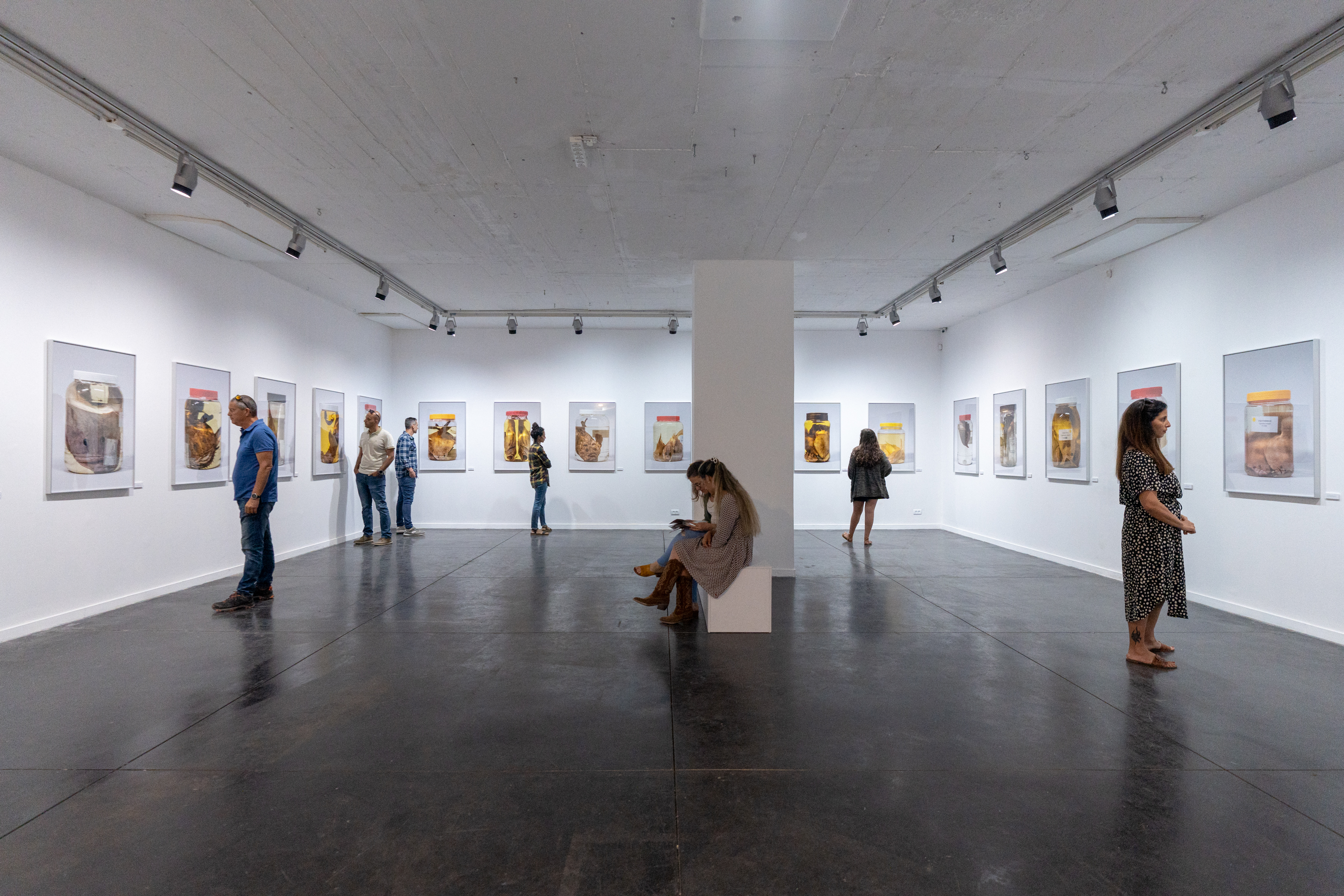 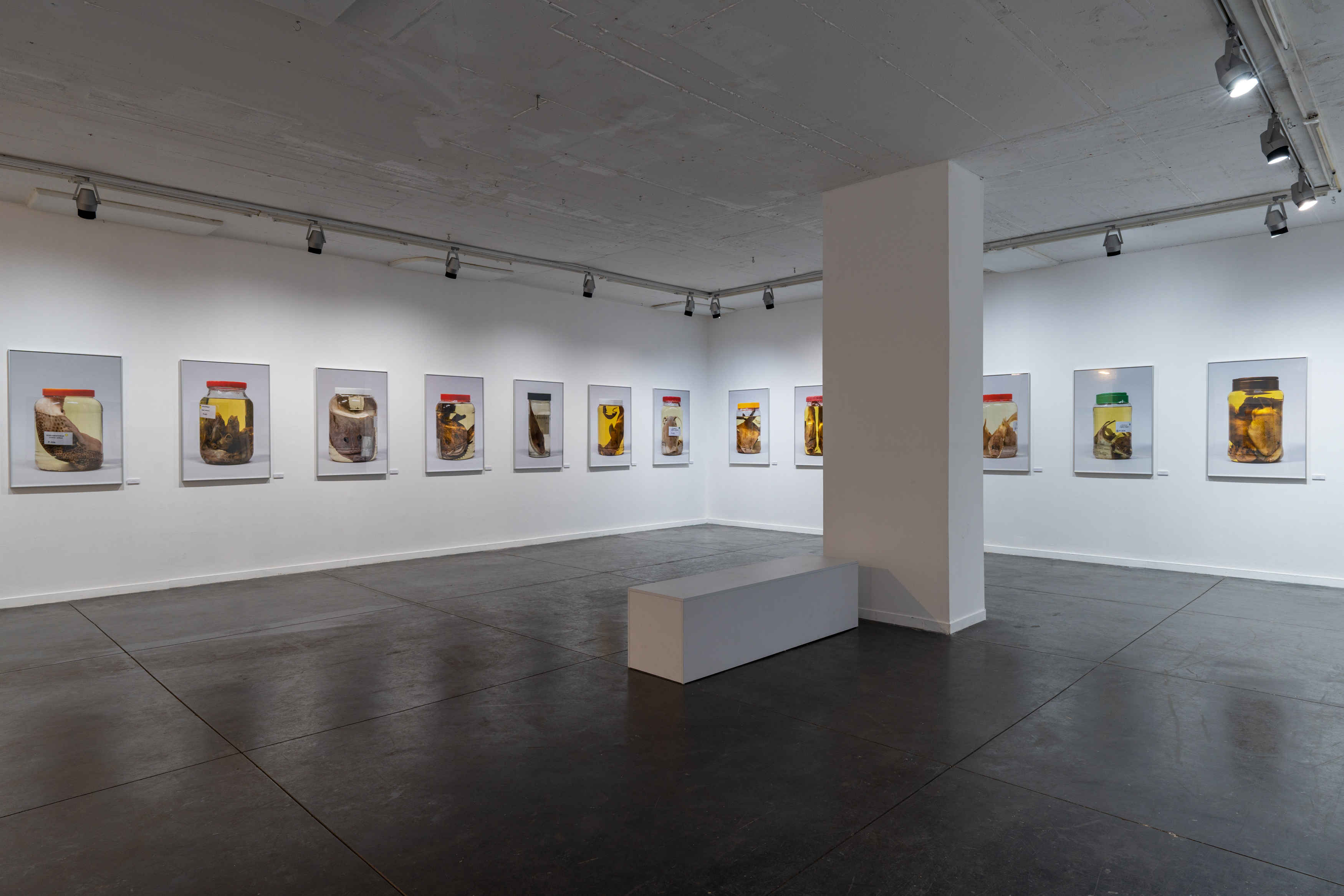 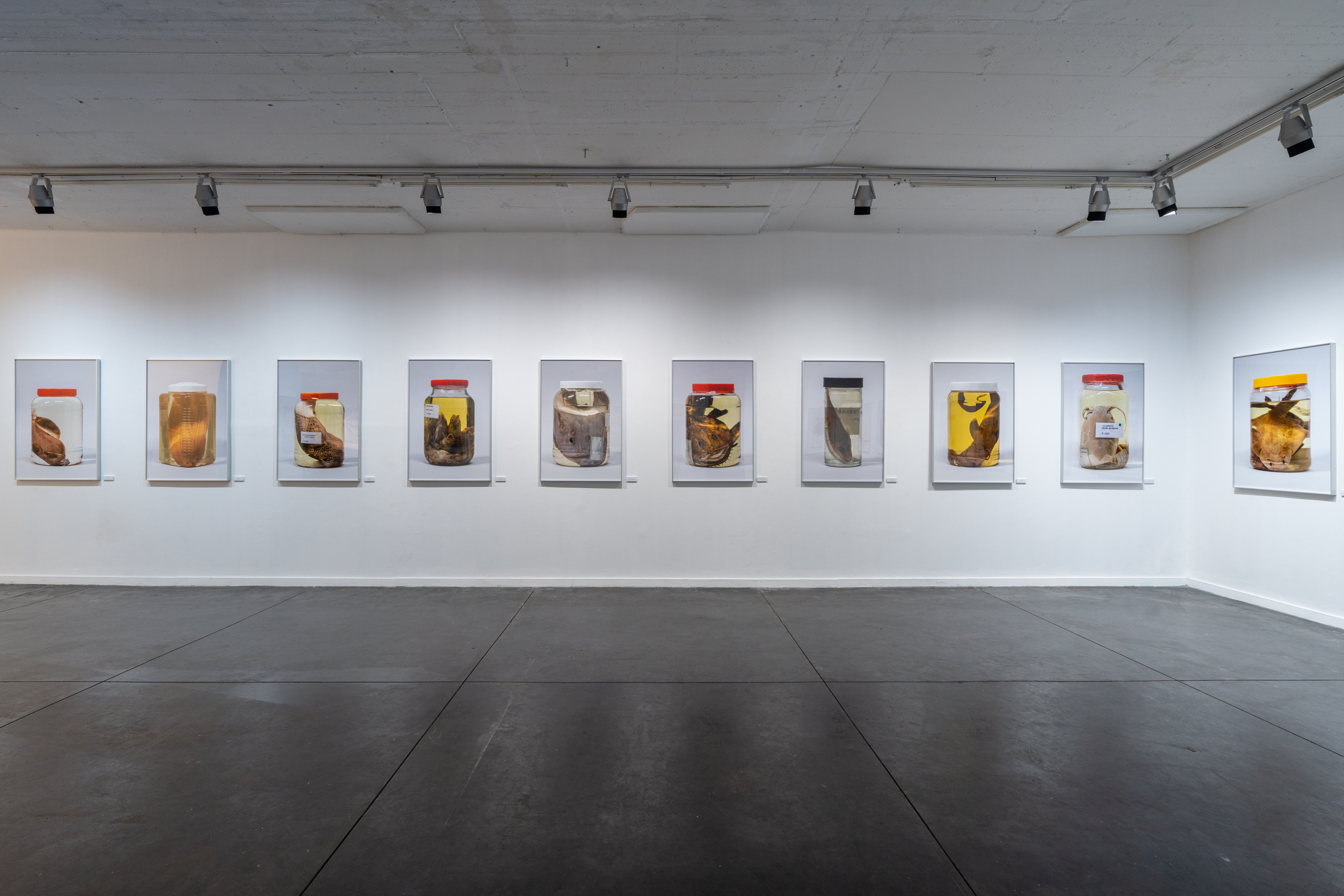 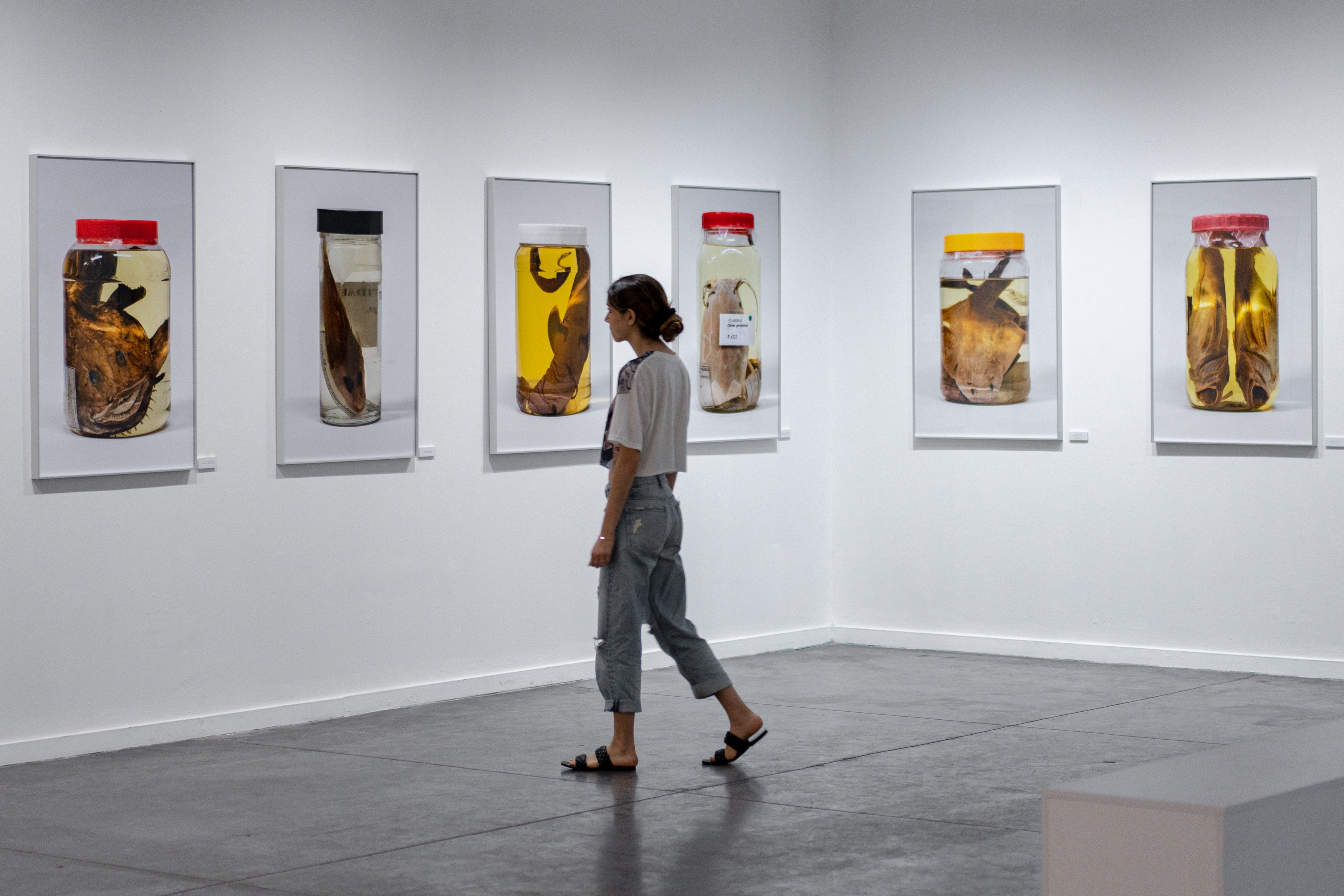