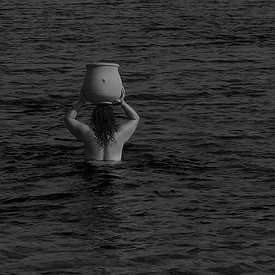 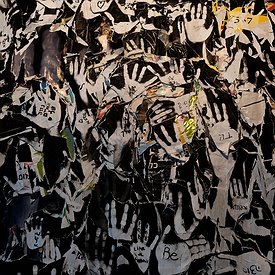 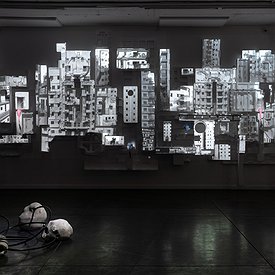 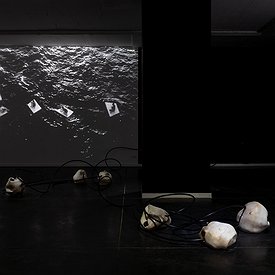 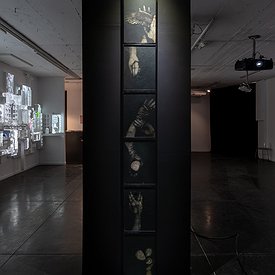 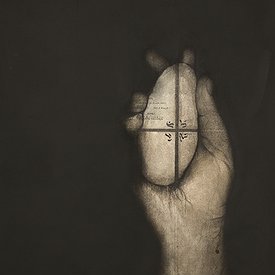 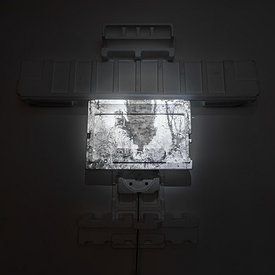 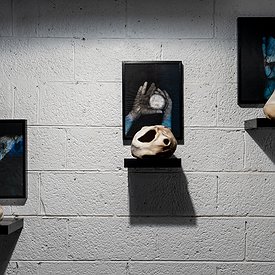 "Can the dream not also be applied to the solution of life's fundamental questions?" (1)

In recent years, Sharon Glazberg has been working in two dimensions connected to the relationship between art and life. The first has to do with gathering stories of communities in the tradition of social sculpture. She became acquainted with it during her studies in San Francisco, as Galia Bar-Or described in the text accompanying Sharon's artist book due to be launched during the exhibition (date to be announced)(2). The second dimension is creating spaces that host healing rituals in the tradition of shamanic art and the formation of mythologies in a space. The works in "Nowhere" are all products of created situations, spaces, rituals, and collaborative processes.

A sea is projected on the back wall of the gallery, where boys float on pieces of styrofoam - a material that Glazberg has collected on the street from the remnants of appliance packaging. It is a central raw material in this exhibition. The work has been born out of Glazberg's dream, in which she tells artist Uri Katzenstein about the creation of this piece after his video work "Hope Machines." Katzenstein had been Glazberg's teacher, and he taught her to use dreams as part of the creative process. Katzenstein's work is accompanied by a narrator reading a letter from far out at sea. It is also offered as a soundtrack for the current exhibition: "Unsurprisingly, children are the ones who demonstrate the most developed adaptability to innovation and strangeness, the only two ingredients of which we have a steady supply. We feel good overall. Sometimes a virus breaks out, a reminder of what is now unofficially called "those days." Those days, hard as they were, are beginning to be perceived here as something to miss, a more innocent version of ourselves."(3)

The exhibition is shrouded in the myth of the Flood, common in many cultures. In the biblical version,  in the story of Noah, God sees that "the wickedness of man is upon the earth" (Genesis 6: 5). He brings down rains that batter the land and the corrupt culture, with the exception of Noah the Righteous, his family, and the pairs of animals rescued inside the ark. When the flood ends, hope rises upon a new land: "Then he sent forth a dove from him, to see if the waters had subsided from the face of the earth." (Genesis 8:8).

Video works are projected on small styrofoam reliefs, "temples" in Glazberg's language, showing the artist or her father performing ceremonies in a horizon-less maritime space and in cyclical time: a shofar opening the gates of heaven, a rain dance, and then a gradual disappearance into the sea.

Alternating video clips, shot by the artist in the new city of Harish, are projected on the large styrofoam relief. Glazberg places three male figures between the balconies and streets of the deserted and generic Israeli city: the horseman, the drummer, and the archer. She documents them with a drone from the Gaza drone unit. The city of Harish, which was established as part of the "Stars Plan" - designed to condense Jewish settlement along the Green Line - was planned and built at lightning speed. Today many of its buildings are uninhabited. Its space is formed between the urban fantasy that materializes as a utopian bubble and the remnants of the abandoned civilization, left for new occupiers.

The quest and the stroll through the exhibition are accompanied by hands - documentation of past and future lives. On the wall facing the entrance (or exit) door are hundreds of hands, greeting (or cursing) the viewer. These were taken from a billboard on Rothschild Boulevard in Tel Aviv: Glazberg had invited passersby, families, and children to write protest messages on their palms, photocopy them, and then put them up on the billboard as part of the "Loving Art Making Art" events (2020, curator: Avi Lubin). Glazberg burrowed and etched the board's surface, extracting the voices of protest as if conjuring them up.

A detached black wall (remnants of a wall from a previous exhibition) displays a vertical line of seven palms Glazberg has photographed on a photocopier. They are  holding objects she has collected during her travels, against a background of maps of Israel from different periods. The artist Tenny Krauss "tattooed" on the photocopied hands calligraphic signs that cannot be deciphered.

The hands in the exhibition are also reminders of those belonging to the women of the Maharaja from Jodhpur. Near one of Mehrangarh Fort's seven gates, located on a hill overlooking Jodhpur, in India, Glazberg came across a wall relief of 31 hands, painted in ocher, some the size of young girls. When she asked about them on the street, she was told they were the hands of the 15 wives of the Maharajah Man Singh, embedded in the wall before the women were burned in Sati – at the bonfires of their husbands.

The exhibition does not contain any earth, despite the signs of its possible proximity. The myth of the Flood allows the artist to raise questions concerning her artistic actions - is it her role to find and design a new land, or just reflect the time of the Flood again and again?

Sharon Glazberg was born in Israel in 1976. She is a graduate of the San Fransisco Art Institute, Hamidrasha Art School, and Haifa University. She has had solo exhibitions at various venues, including the Museum of Art at Ein Harod, Kav16 Gallery in Tel Aviv, Luggage Space Gallery in San Francisco, Haifa University Gallery, and Islip Museum, NY. Her works have been shown in numerous group exhibitions in venues such as Bergen Kunsthall, the Jewish Museum in New York, The 2000 Cuban Biennial in Havana, the Petach Tikva Museum of Art, Ashdod Museum of Art, Galerie Rabouan Moussion in Paris, the Negev Museum of Art, Rockefeller Museum, Jerusalem, MoBY (Museums of Bat Yam). Glazberg is also the community director of Zumo Museum - the museum on the road.

The exhibition is supported by Mifal Hapayis Art and Culture Council. 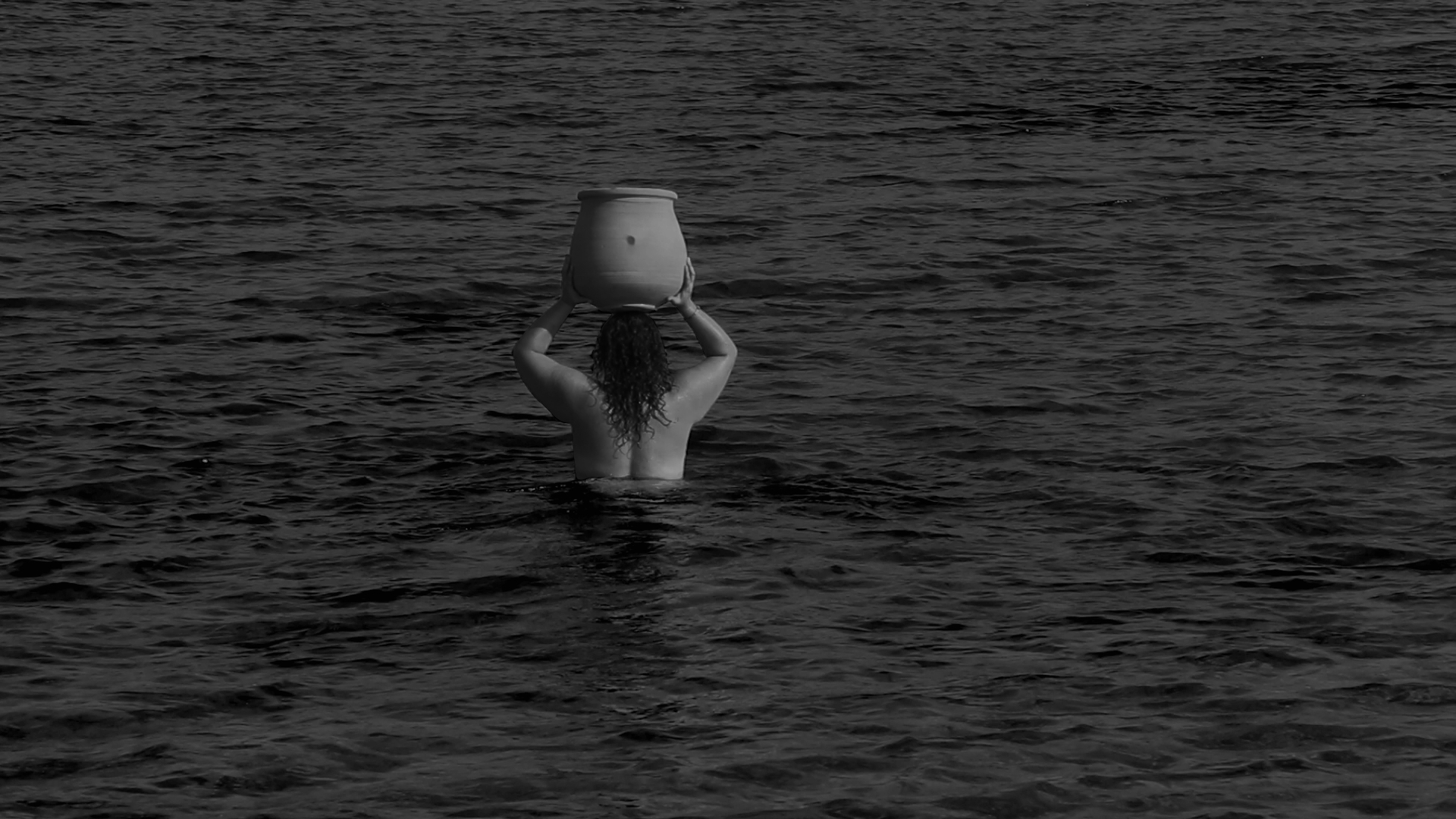 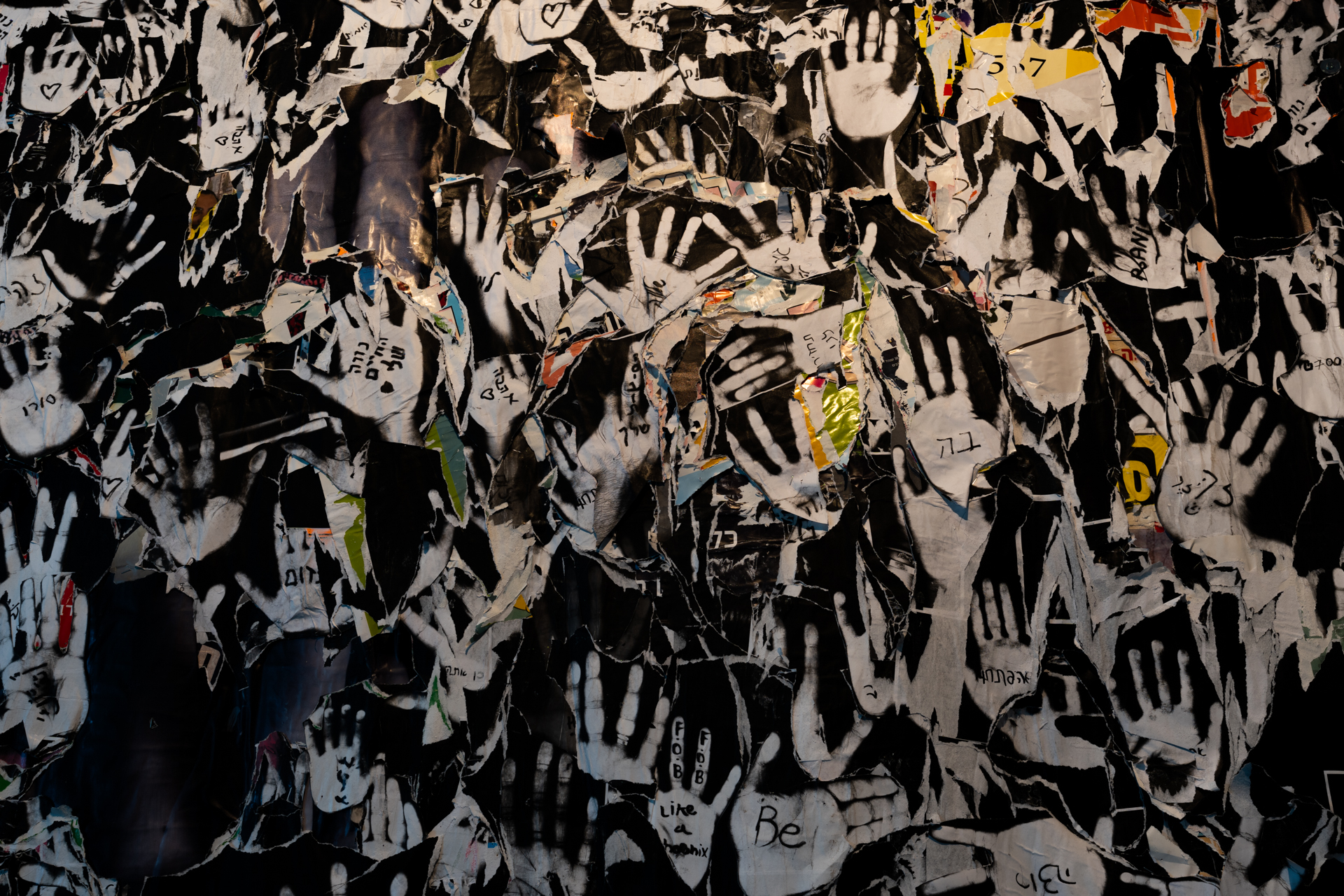 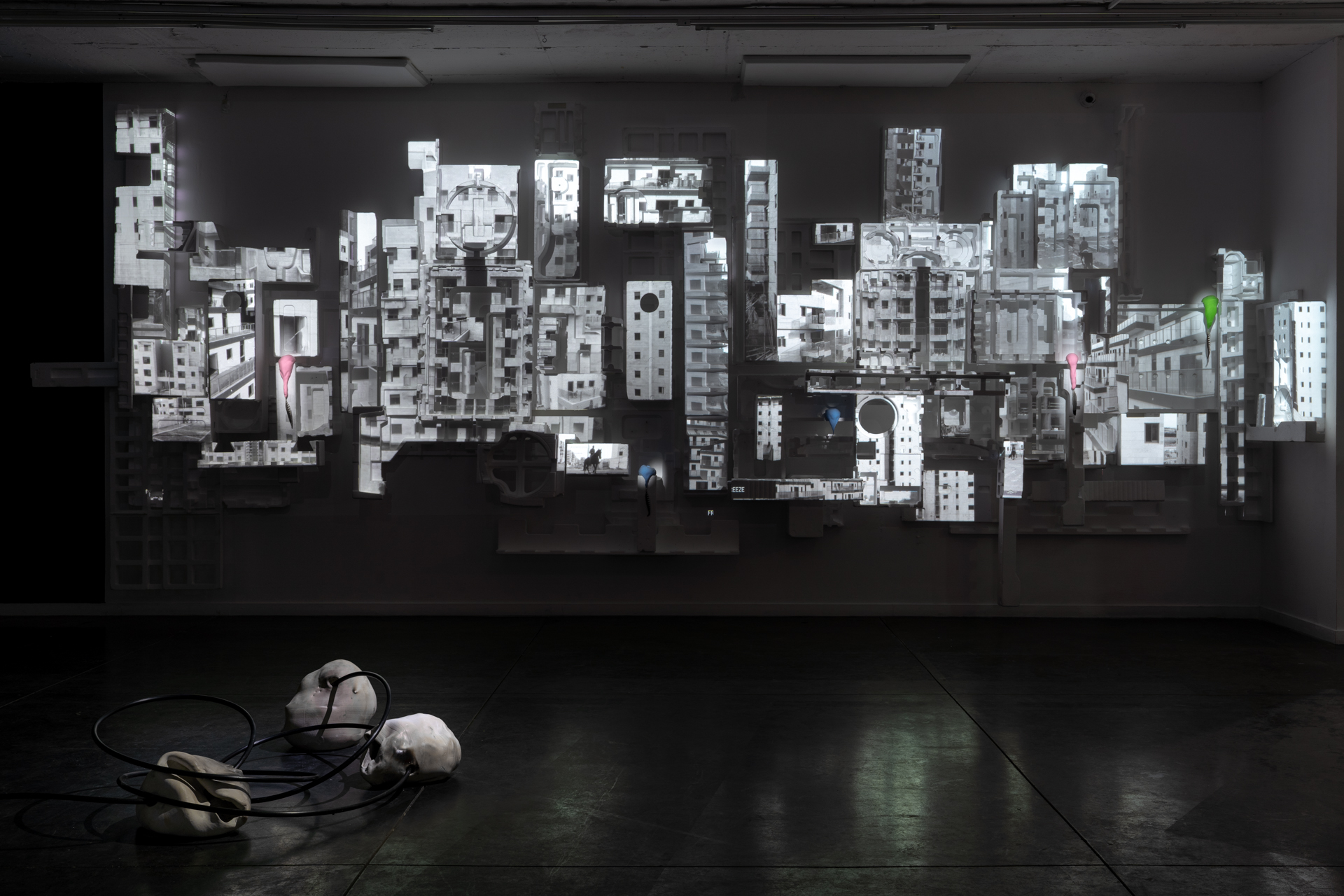 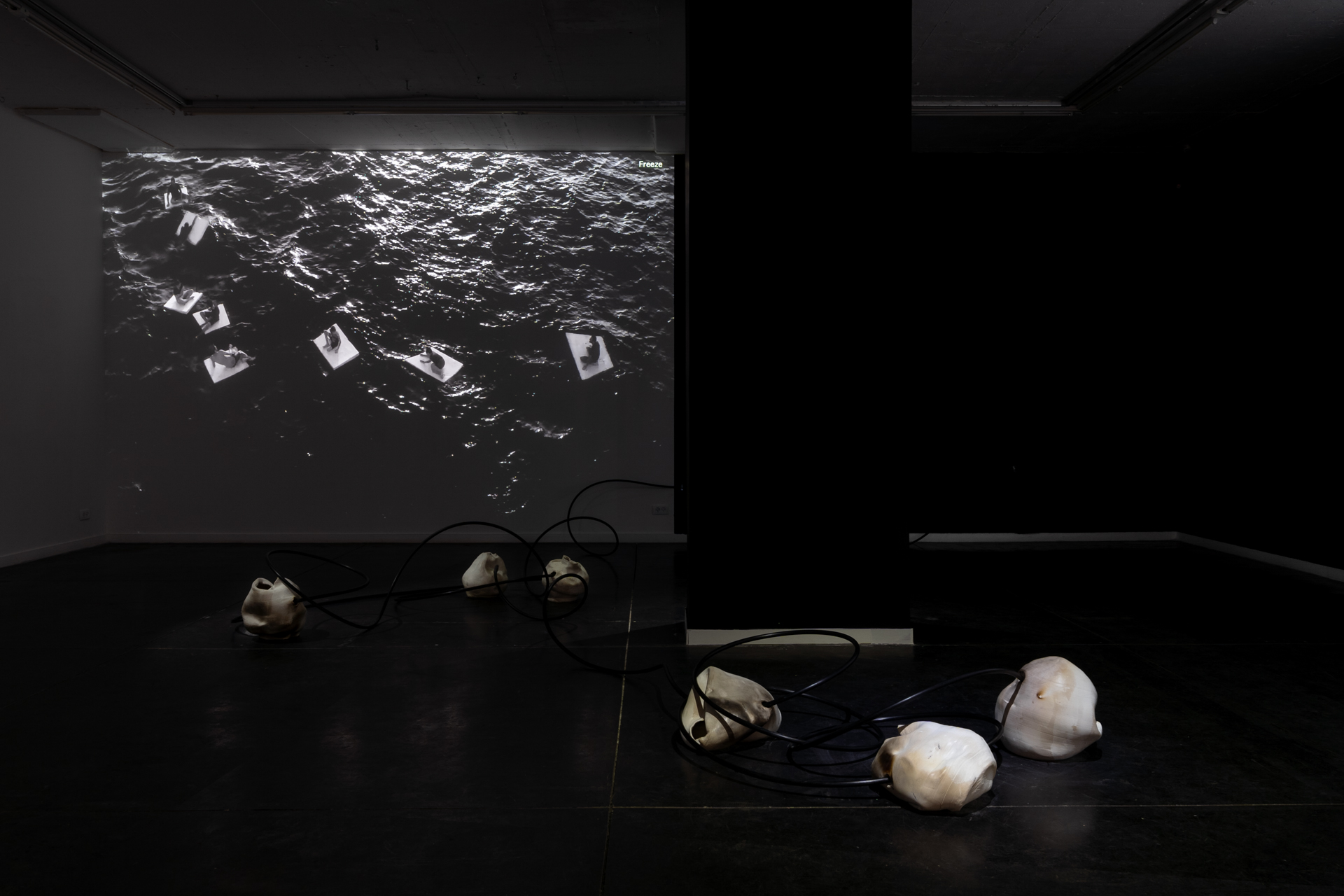 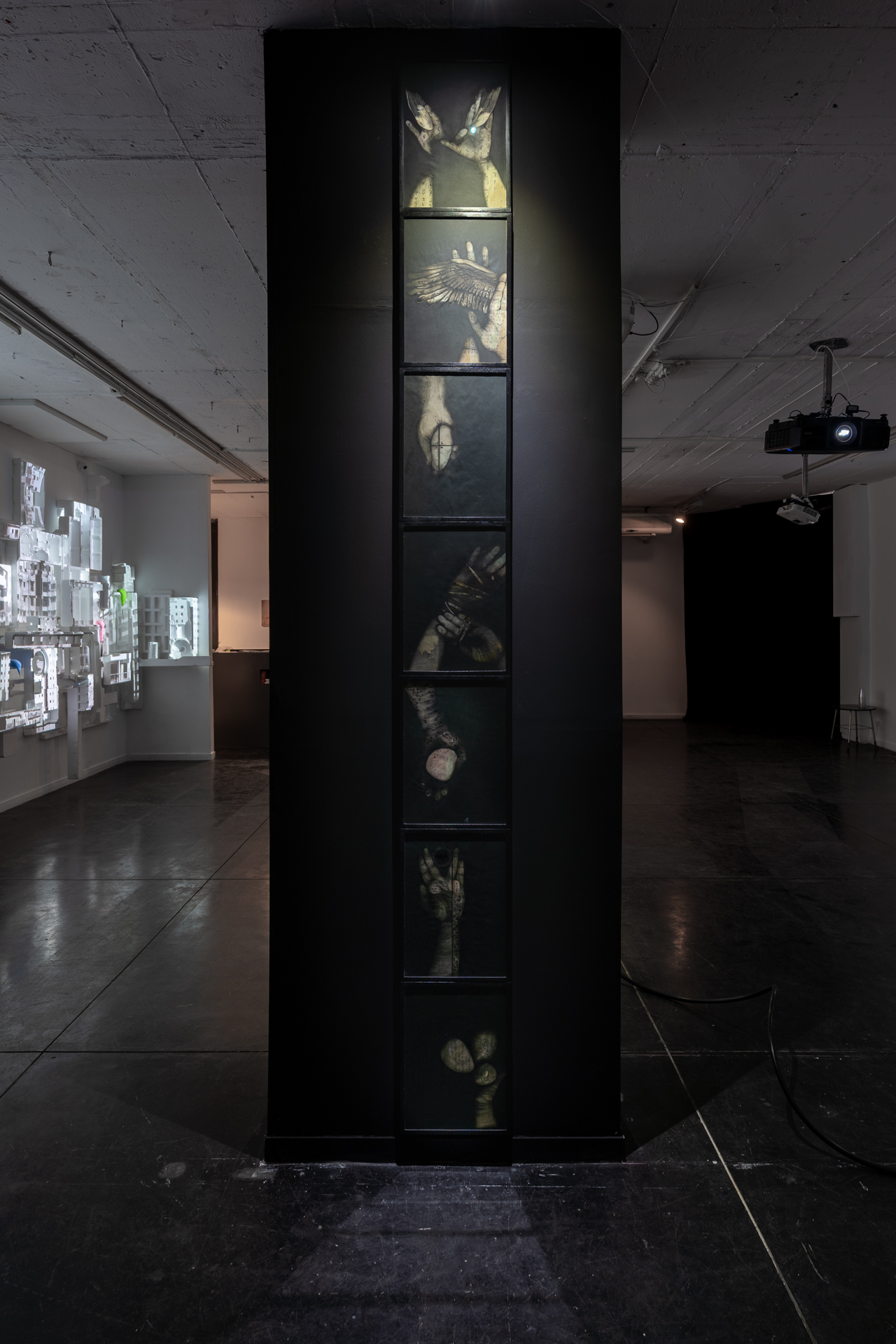 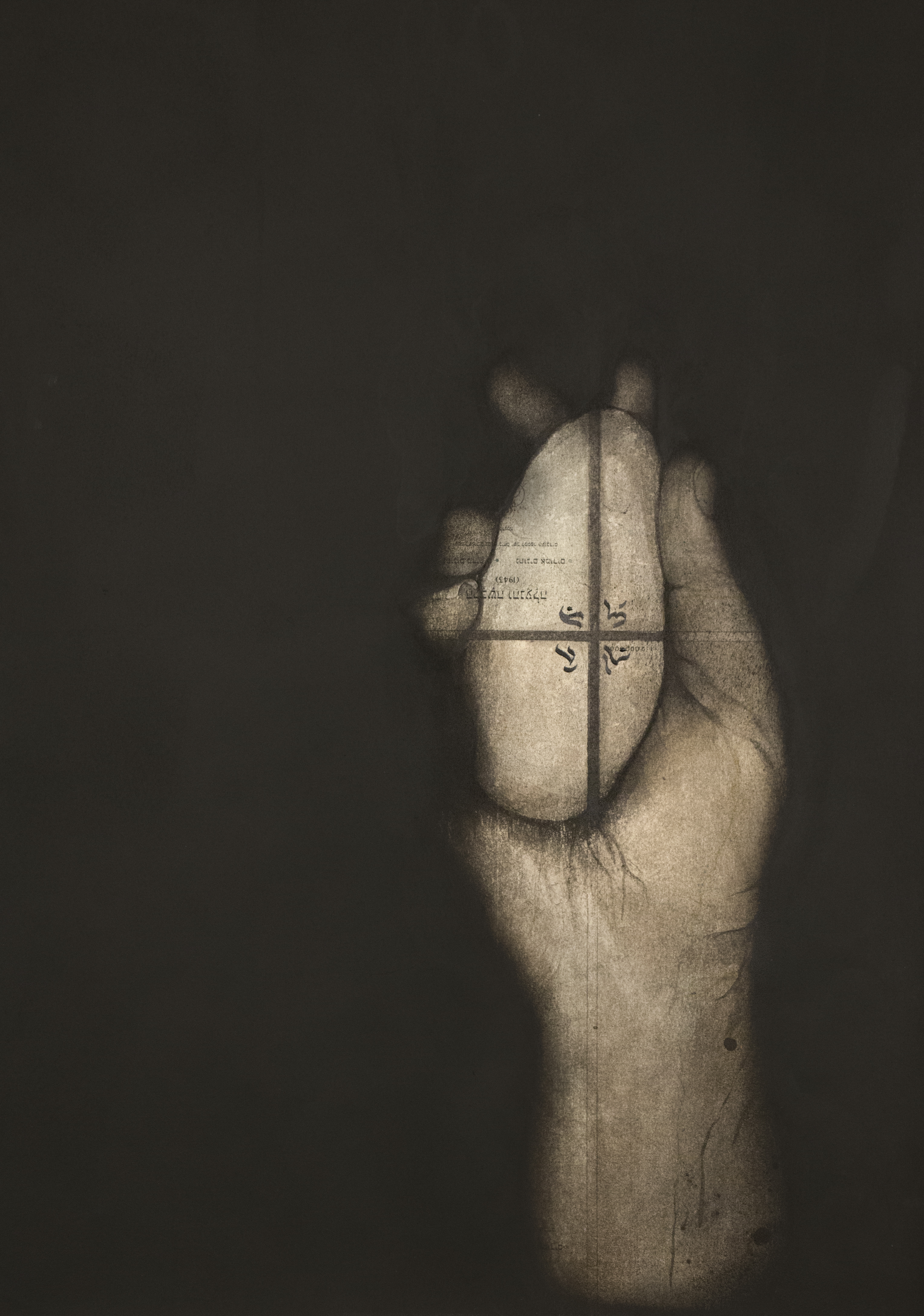 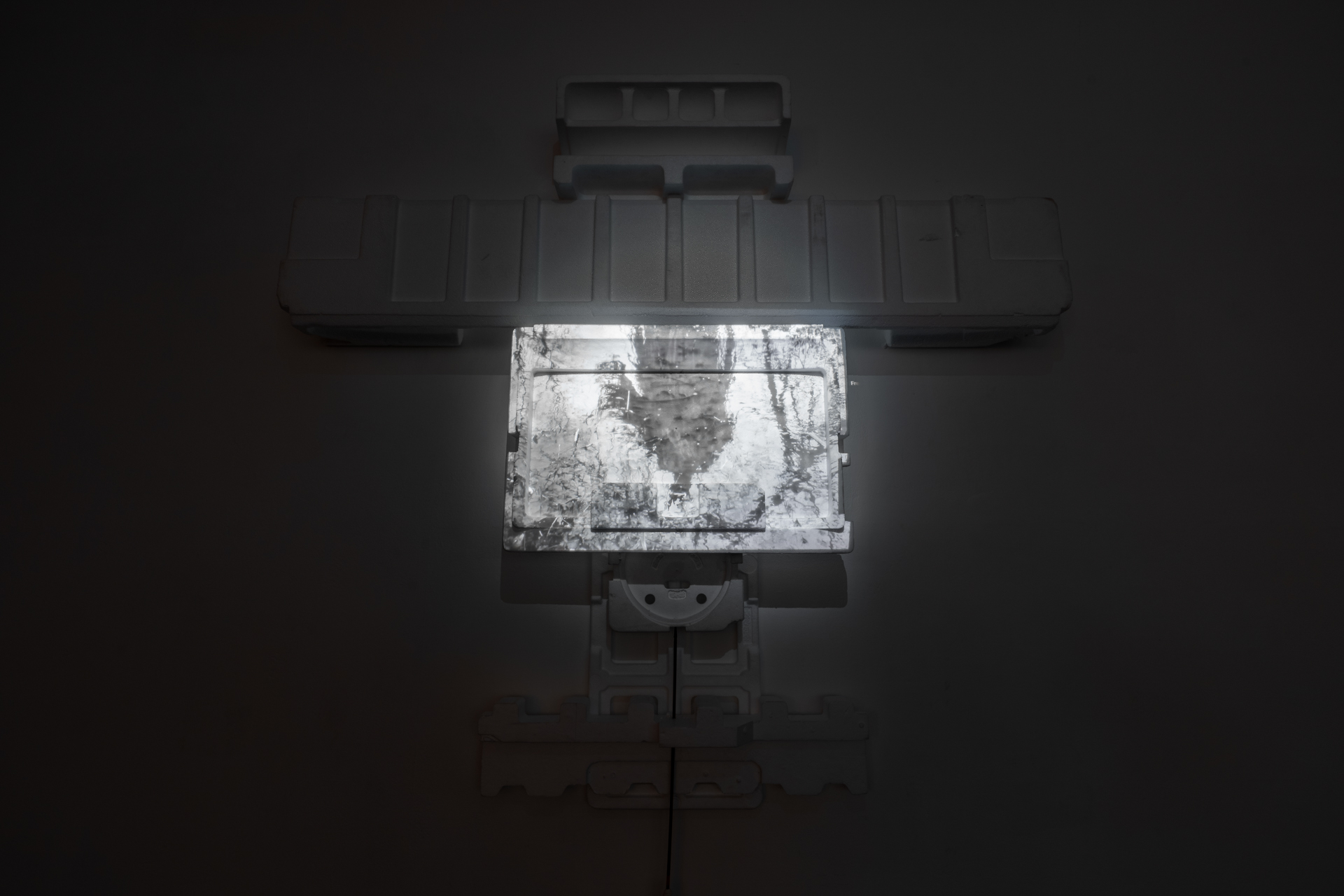 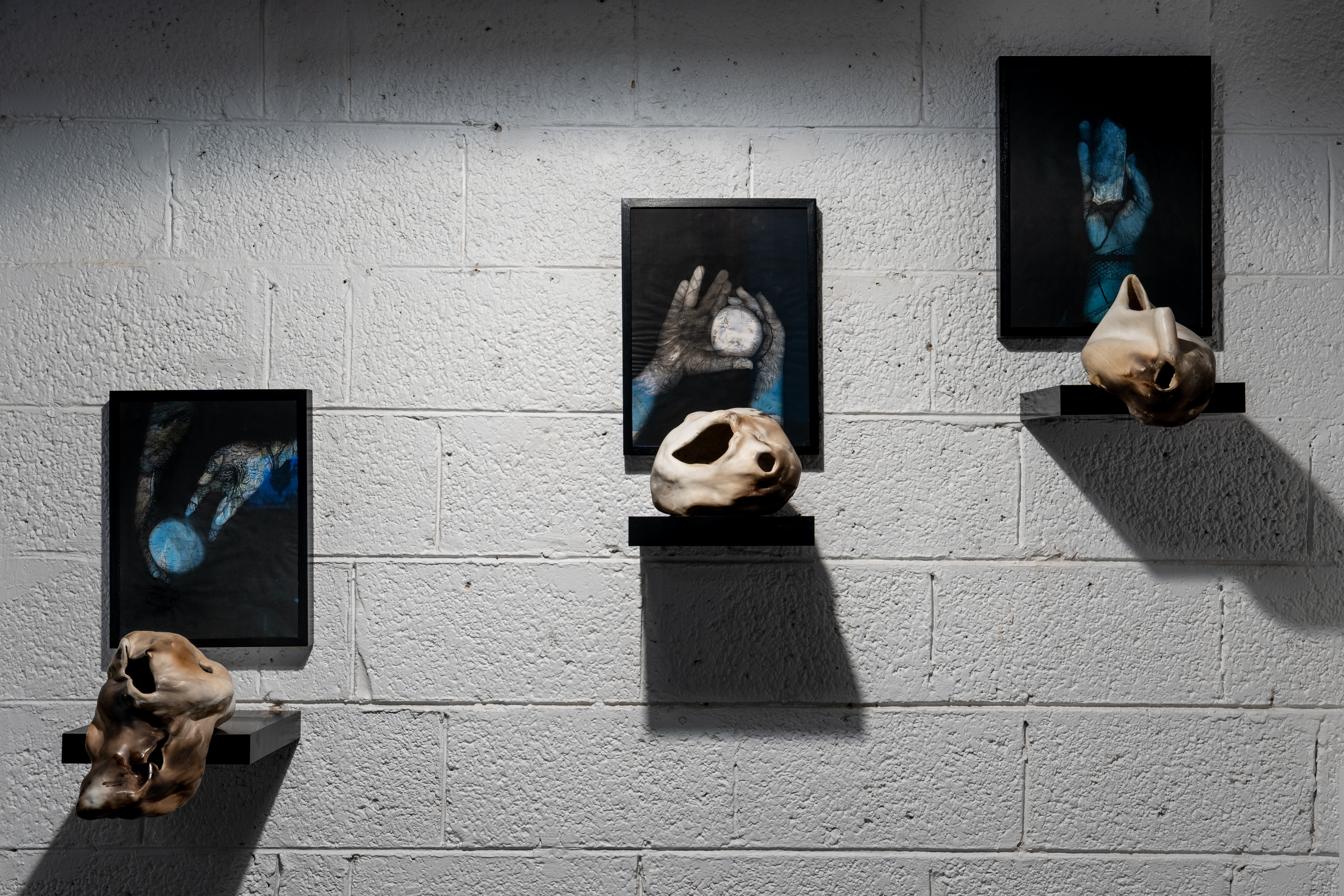