Talya Shalit: Since when have you been working here, at this studio in Jaffa?

Sagie Azoulay: More or less since coming back to live here, in 2014. I grew up in Holon but was born in Jaffa, and it had always been my family's hometown. My father has a record store on HaSha'on ‎square, and I used to work there as a teenager. 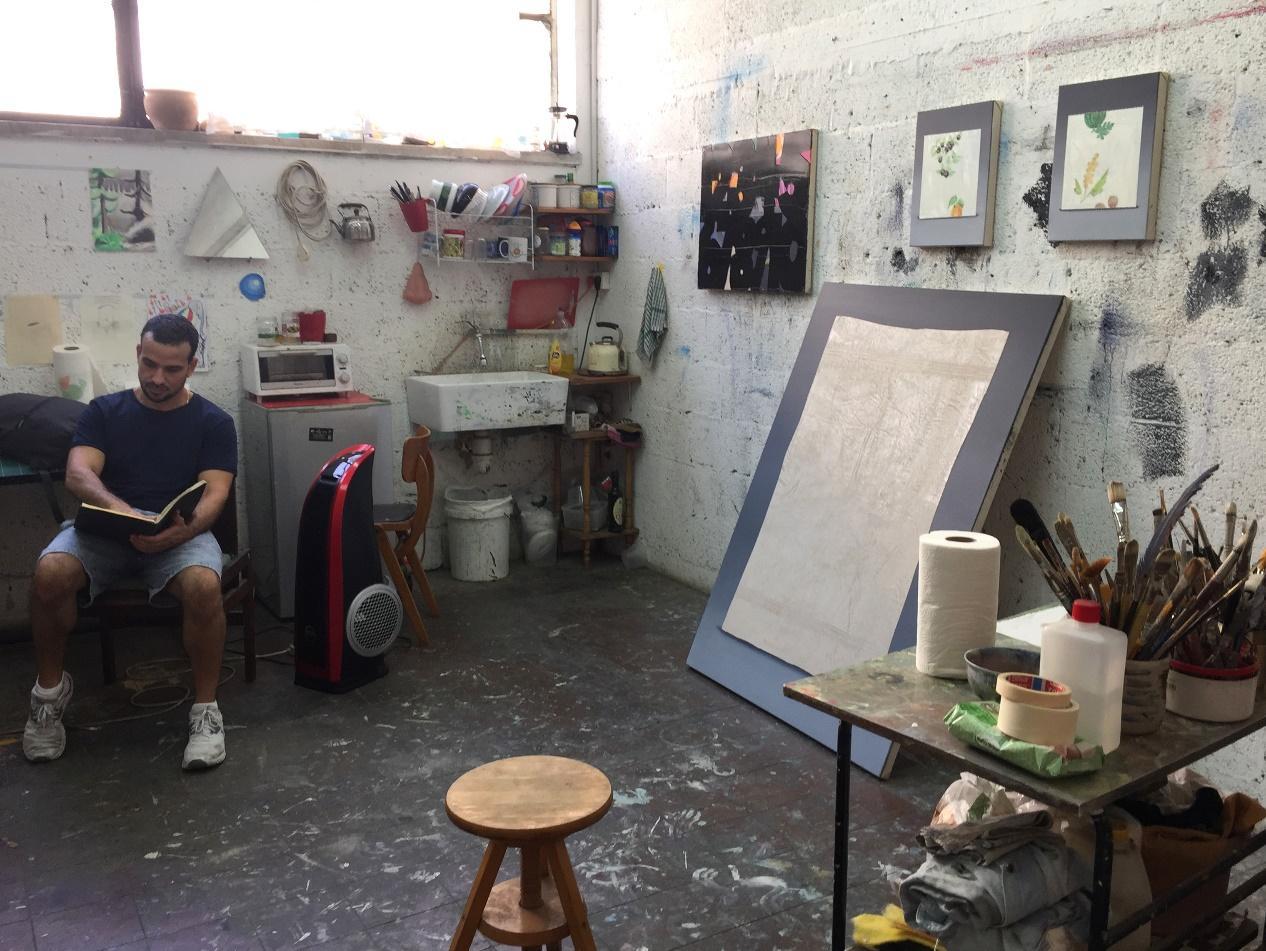 TS: So, it is not just your studio that connects you to this area.

SA: Yes, I can say that in the past my paintings have been influenced by this seamline zone. Jaffa is somewhat like a melting pot of different worlds: remains of the ancient world, Napoleon's army, Palestinian buildings alongside Bauhaus ones, housing for Bulgarian immigrants… In some places here one can see layers of different periods on top of each other – something that always finds its way into my work. Even when the layers are not specifically of Jaffa, the city certainly inspires me.

TS: Tell me about your studio routine, When do you work, in daylight or at night? Full days or short sessions?

SA: When I have the time, I especially enjoy working at night. After 6 pm the workshops close and the craftsmen leave, and the place becomes quiet. The world gets slightly calmer. I try to come and work here several times a week, to make it a routine. Sometimes routine is found at the end of a day or a week, but being here as much as I can is important to me anyway, even if I don't always know what I am doing, I'm constantly searching for some new interest. 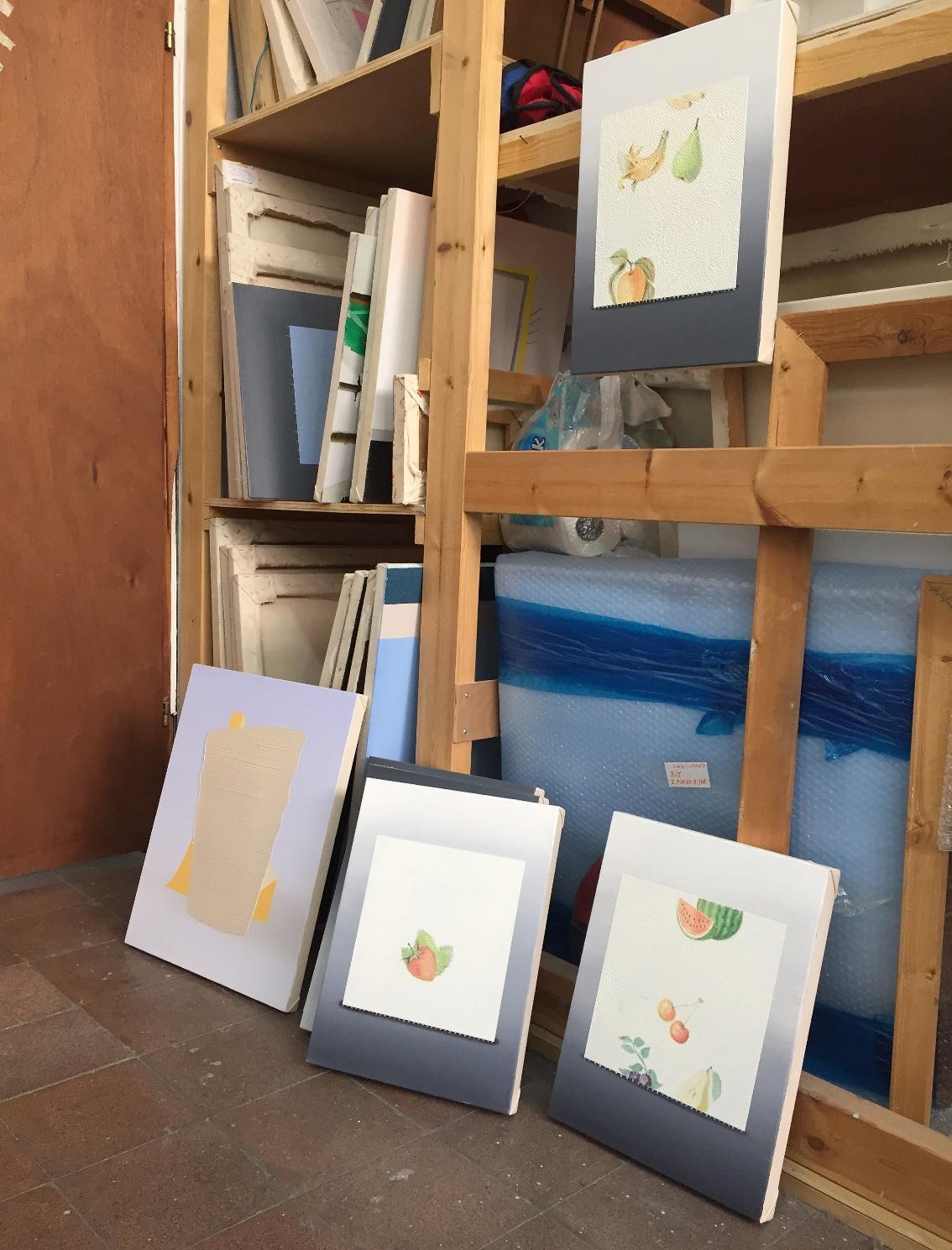 TS: New interest? What is its essence?

SA: New interest within the painting. Sometimes there is a discovery or an image that interests me, but I cannot yet say explicitly that I’m working on any specific concept or theme. At such times I wander. For instance, since Ernie (Sagie's exhibition at RawArt in 2020 – T.S.) had been exhibited, as I started working on a certain painterly material, I found that, over and over again, I cared the most about a single painting – the one I had been working on at the time. Only now I realize that I have been working on a group of paintings that can be seen as a series. Although unplanned, this body of work has been assembled from permutations of an image, or variations of it.

I love the idea that a painting can be sort of print, mirroring a real object. I sometimes imagine a painting of, let’s say, pink rag - then the pink rag can face the painting and look at itself. I say this because oil paint has a certain ability to follow material codes, with its tendency to sudden abstraction, and the quality it has to function like something one prints on, and not the material you paint with. For a while now I've really been drawn materially to this thing, to the likeness of the realism of the material and the painted image. The image is very close to the object, yet it is abstract. 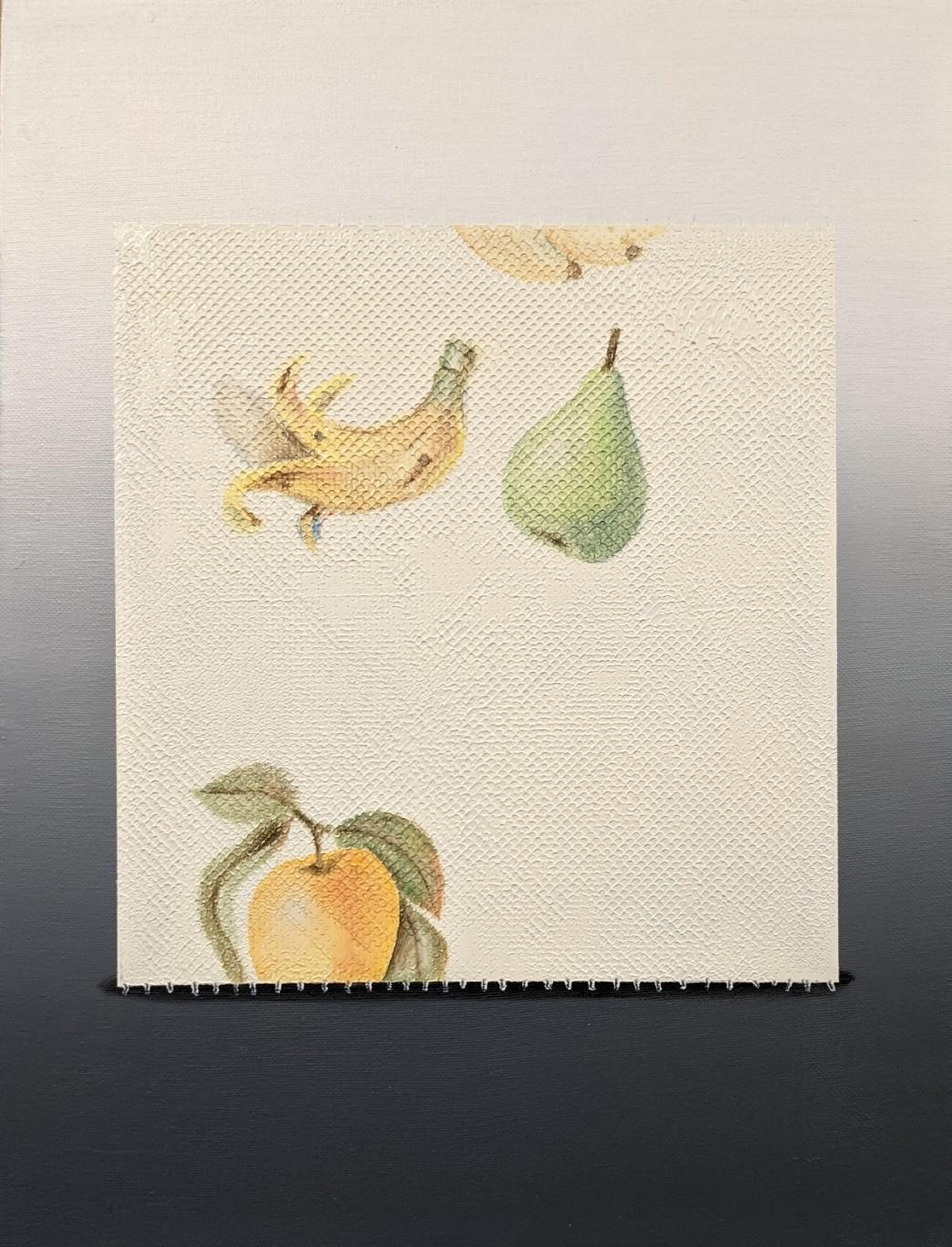 TS: It is interesting that you say that you’ve gone back to the single object, even though your new paintings are clearly related to the work exhibited in Ernie.

SA: Do you find them connected?

TS: Especially through the frames, repeat often. Something is framed, yet it bursts out. The frame of the painting, which is in the painting, of the window, or the object. The object is looking back at itself – a reflected gaze, or repetition as a frame. And all the paintings share the same format.

SA: It might be related, that's true. The new series is mimetic too, but on the other hand it is very material – the oil paint is completely physical. After Ernie, the thing I wanted most was to have a simple reason to paint, the way still-life painters paint fruits. I was looking for a reason to paint fruits. Then I encountered these paper towels. I repeated them, again and again, because they didn't satisfy me. I revisited then to look at thinner, dirtier areas, to study printing deviations, but in the painting. The oil paint's texture really gets the feel of the paper. Suddenly it is not a canvas anymore, but a paper towel, absorbent paper. Painting a piece of fruit on it accurately while struggling with the printing’s pixels that have turned into texture - is very satisfying. There were these small revelations within the paintings.

SA: To me they are funny, I always pour some humor into my works. Think how funny it is, that this napkin can't stand upright – there’s no way it would stand like that and suddenly stretch. I find it amusing. It becomes a handkerchief… Or a monument. Or a runway model. I even made a huge painting of a towel. It makes me laugh just because I am so committed to the process. What do you do at the studio? I paint rags.

TS: And the renewal that you are searching for?

SA: I'm still searching for it, but it will always be within a painting, or on the way toward one. When I have nothing specific in mind, I begin with the pictorial environment, or with the materiality, and then it can burst out. I don’t know what would appear and excite me – it can be an idea, an image, or something revealed in the material: shapes leaning against each other, or a play of shadows, or even preparation procedures, since I'm already near the paint and the canvas, and meanwhile the eye is already wandering, looking for the image. The first rag, for example, appeared when I was working on the background of a painting of a broken ostracon. Some paint got mixed on the canvas, so I absorbed it with a rag, then suddenly the rag was floating above the pictorial environment. I wanted to recreate this moment, this time in a painting. 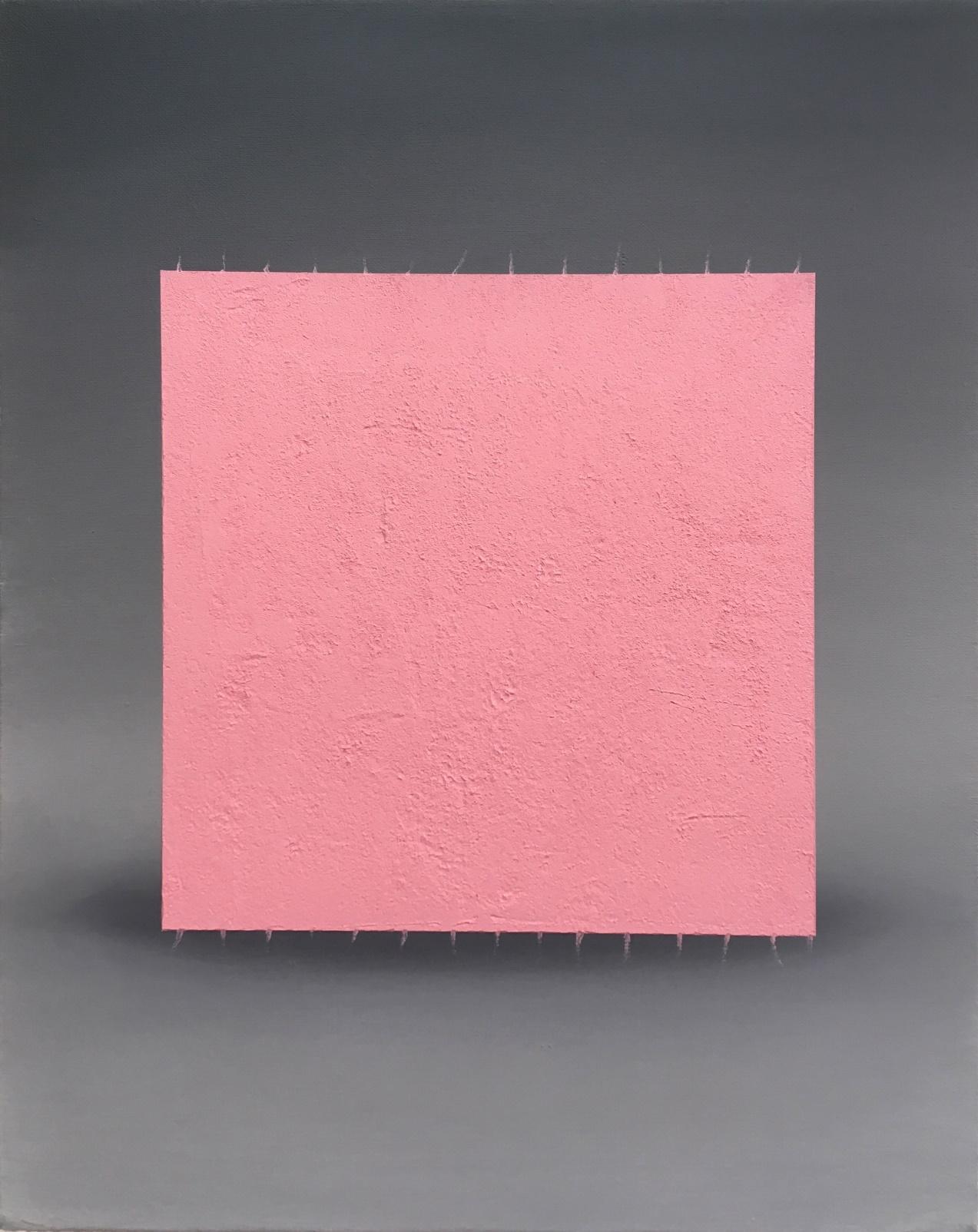 TS: Do you pay attention to the way that you curates the artworks inside your studio space as you place them next to each other?

SA: Yes, absolutely. It is important to me to have dynamic surroundings. It is related to the work as well. Sometimes I want to recall a certain technique which I've used in past, or a color range I've forgotten. Every once in a while, I make changes. Sometimes I take down all the paintings and hang only drawings and inspirations instead. 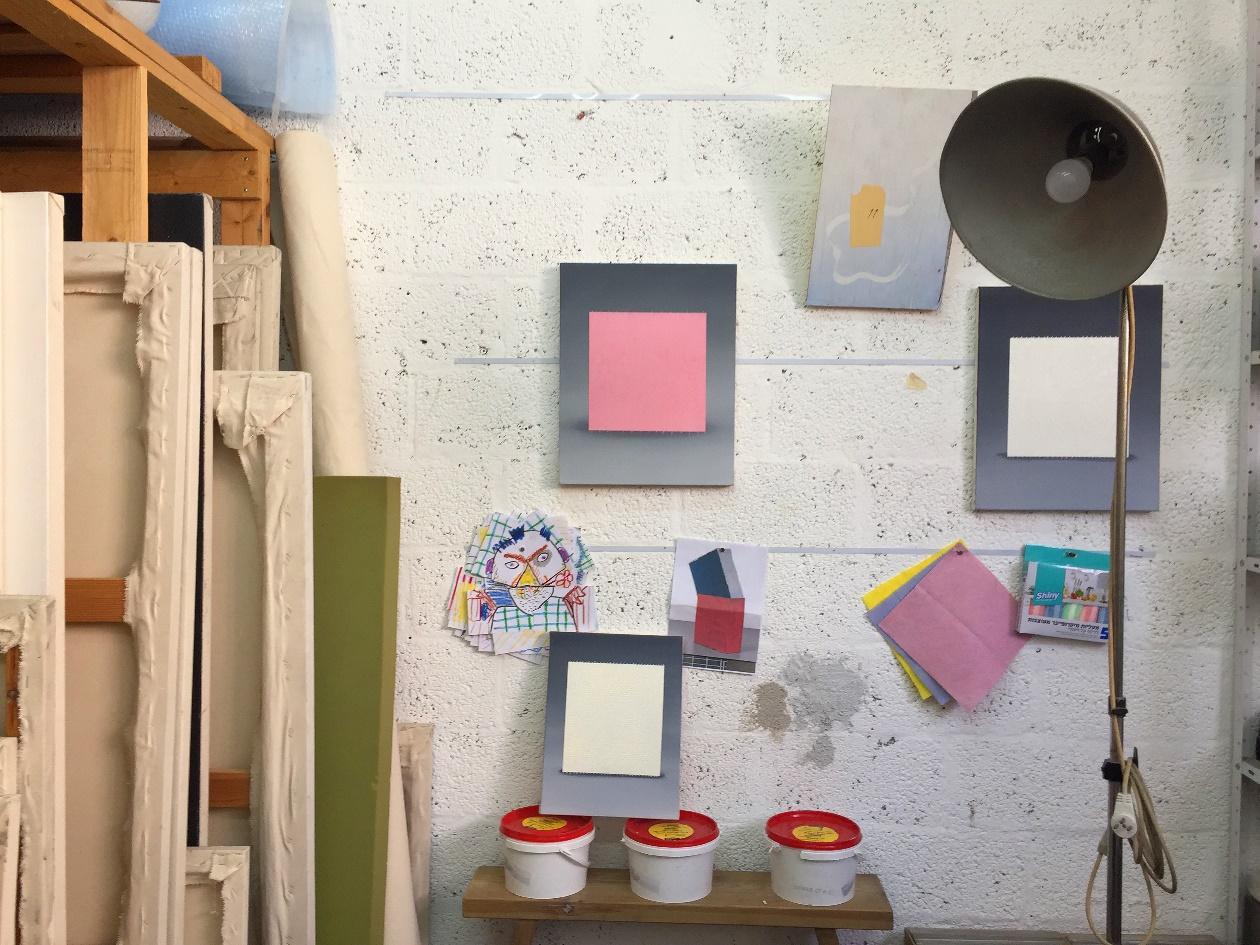 TS: What else are you working on now?

SA: These days I’m working on a new project that really excites me – a public mural in Haifa. It is a large-scale work, 20 meters wide, so I tried to figure out how to translate my technique from its painting and printing physicalness to that of skim coating and splashes. I’m working on it with curator Yael Messer of Beit Hagefen, and the mural is based on both ancient and contemporary images from the local mythology. I'm still developing it, not quite sure yet. In the last couple of days, I've been concerned about the shapes’ materiality – whether their outlines should be resolved through texture or by delicate use of color. This is what I’m doing now. 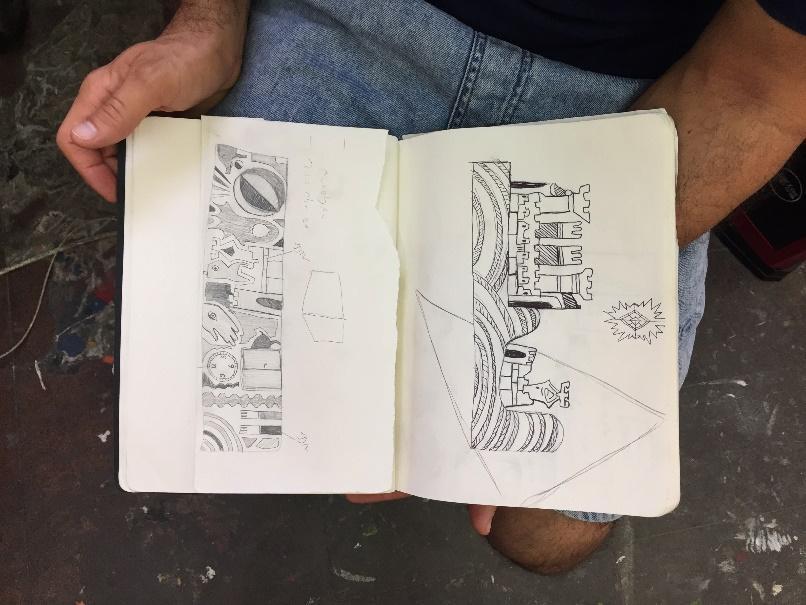 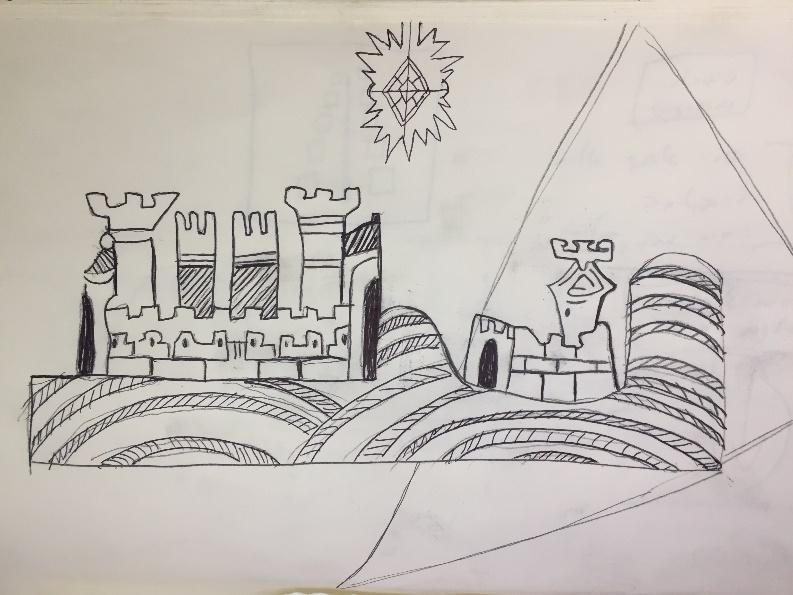 TS: What is the oldest artwork that you keep in the studio? 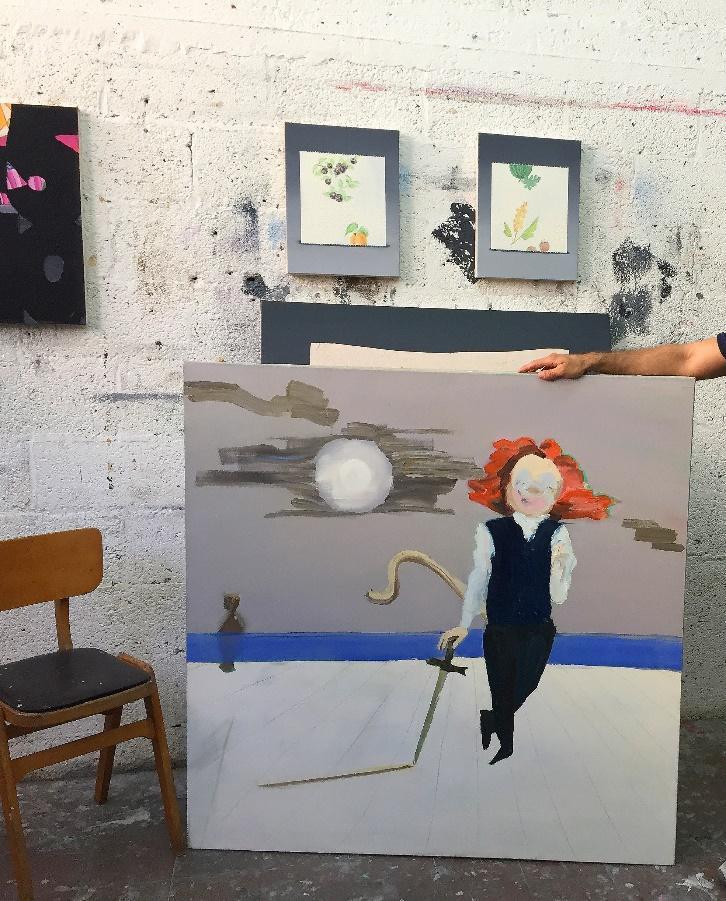 TS: I wouldn't have guessed it is yours, except for these heartbreaking creatures that keep showing up.

SA: Yes, I sort of want to go back to figures. At a certain point I took human figures out of my paintings and now I miss them. Although they’ve never been left out completely, because the objects I paint are themselves like figures, and they always hide a secret story, something that has happens to them.

TS: With whom do you like to talk in here?

SA: Adam Kaplan is a good friend living in Berlin and we talk a lot. We share an interesting conversation about artworks that contain emotion or tend to be nostalgic. But that's not all of it – for instance, recently we talked about the way an emotion can pour a warm light on a thought, which is slightly cooler.

Another person who’s present in my studio is my partner, Nir Shauloff. He comes from writing and performance. He understands materials deeply, but also stories. Talking with him about a room's dramaturgy can be fascinating. I can tell him some small things, and the discussion with him would put everything in order.

TS: Do you already think of the installation space when you start working on a new painting?

SA: Yes, it is already in the choice of format. It began at the Jerusalem Artist House, when I had the 2014 Moses Prize exhibition in a long, narrow room. I had many artworks in different formats, but I realized that I wanted to have a line of long, narrow works, to create a rhythm or a beat. These are two of them – "Day" and "Night." When installed, it felt as if there was a sound to it, like when sliding one's finger on a banister. I then understood that my paintings demanded thinking about them through space - space was an inseparable part of them. Meanwhile, every exhibition I’d had evolved from thinking about the specific space where I would exhibit. 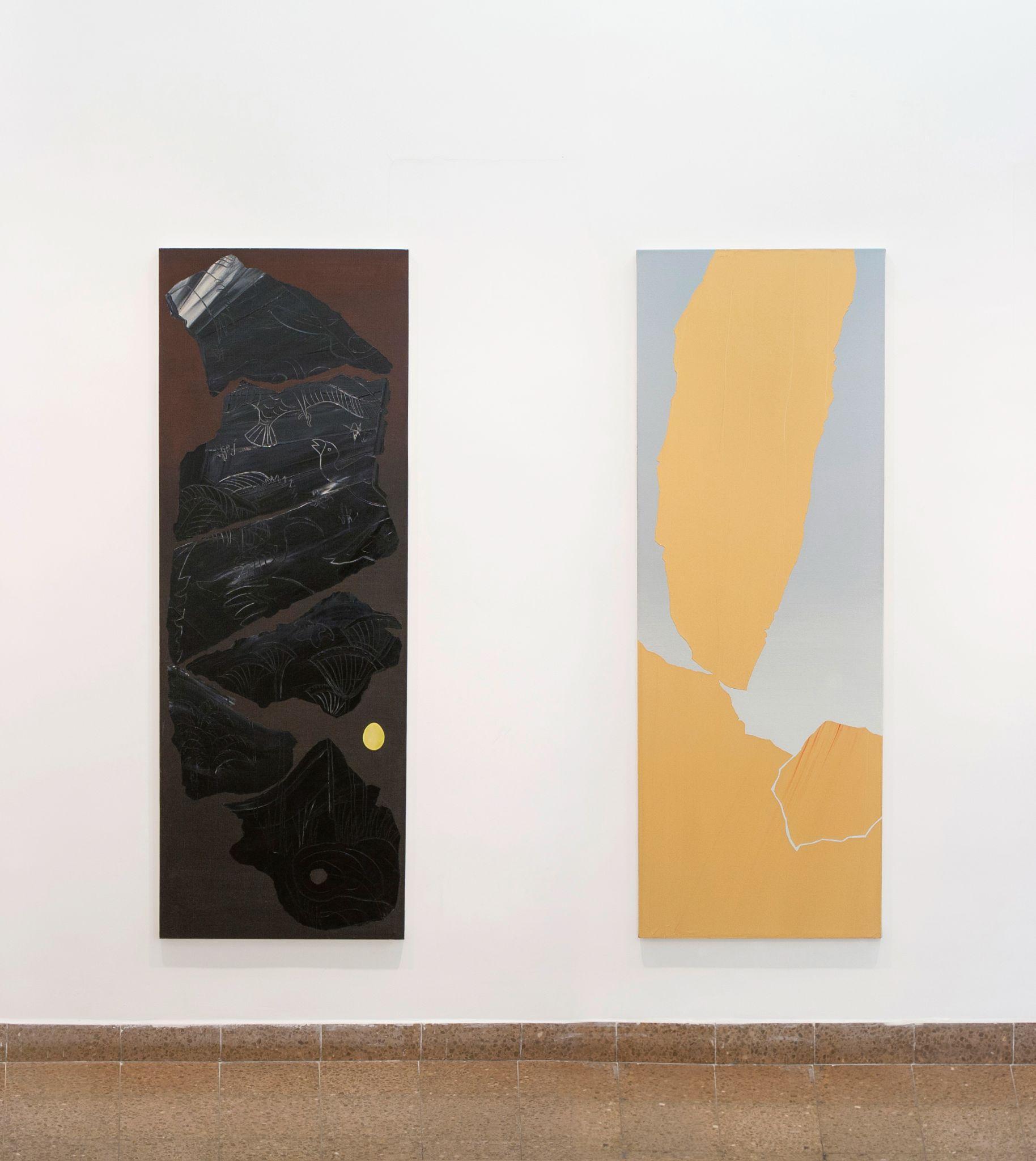 Ernie, at RawArt, was specifically designed for the gallery. I built a maquette, and looked at the gallery's space from outside, with the column in its middle. I tried to figure out what kind of environment this space offered my paintings, and which place in the gallery would fit them best. This was how the idea of building another wall came up, and of darkening the room; the thought of wandering around the space and the experience in front of the paintings. Same as when working on the mural in Haifa, where the street offers another way of looking. 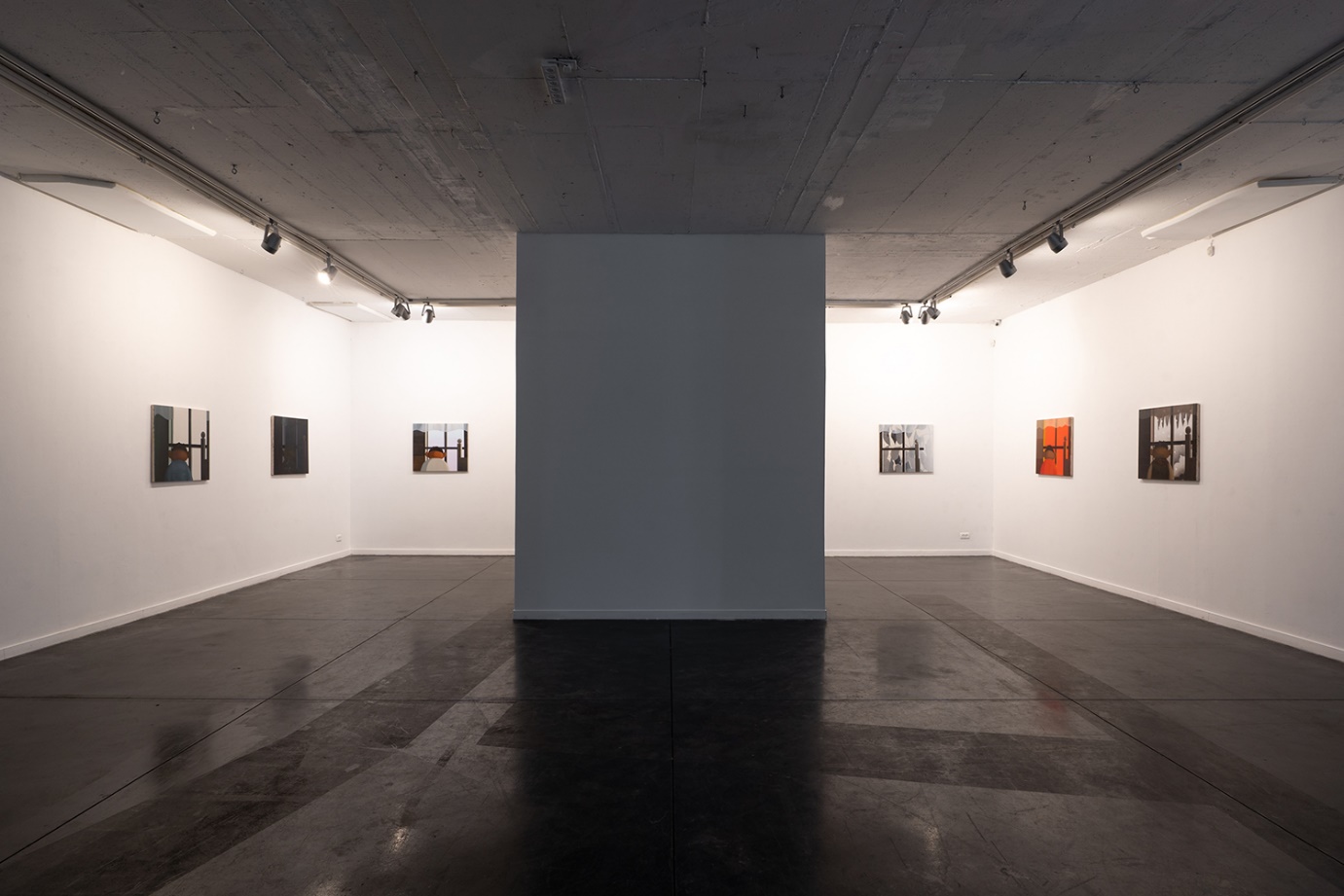 TS: Do you have any painting here that you've abandoned in the middle of working on it?

SA: So many of them. Do you want to see? I don't exactly abandon them; I leave them, to be revisited later. I have this drawing of my cat, Sammy. For years I’ve been planning to paint him looking at the mirror, but he died so I let it be. I'm sure I'll come back to it, though. 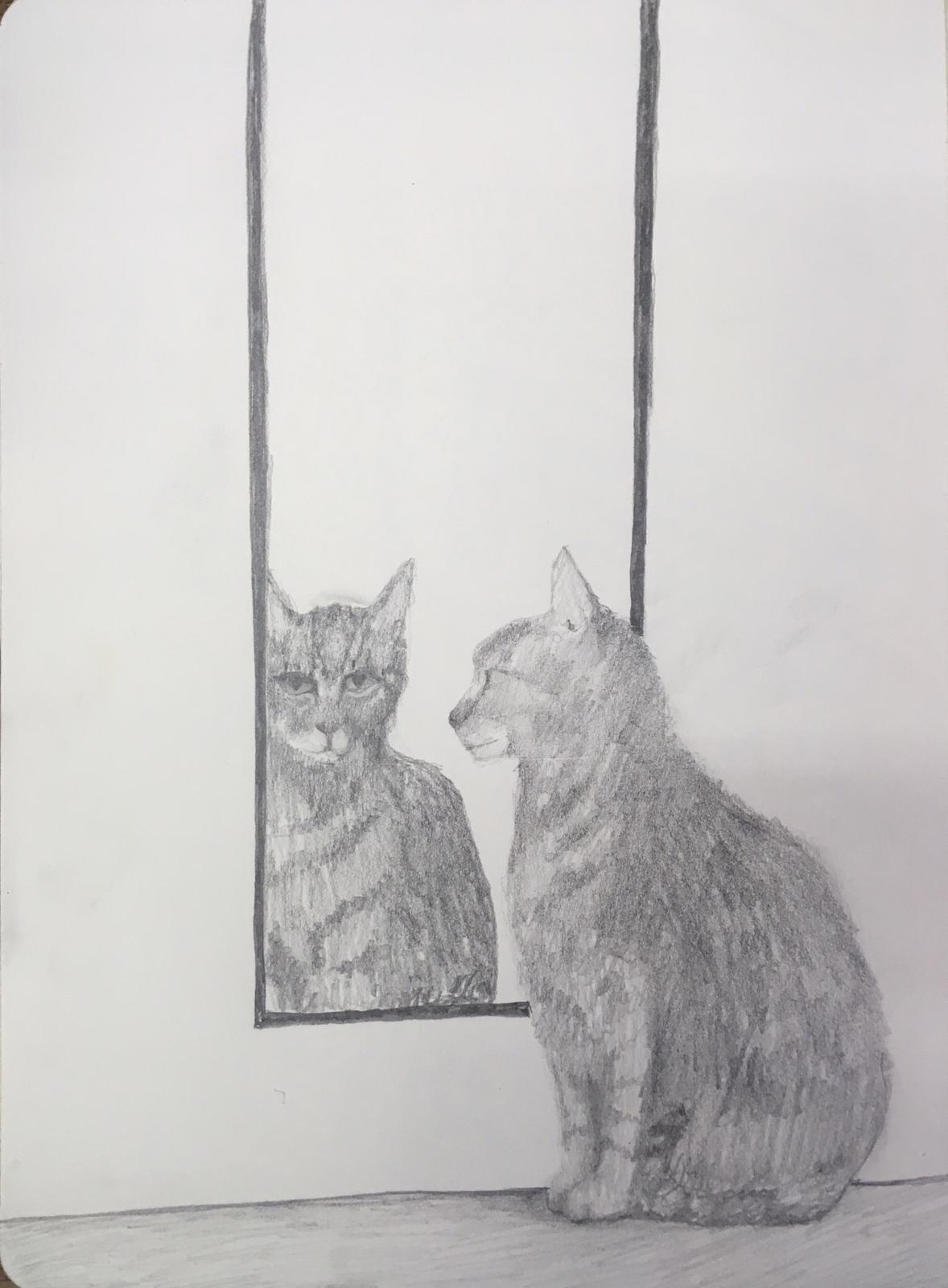